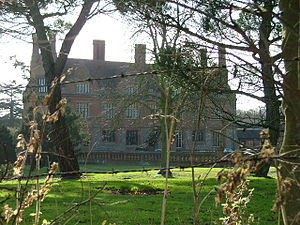 Aston Bury Manor house was a feudal manor house located in what is now known as Caddington, a parish historically split between Bedfordshire and Hertfordshire in eastern England. It was built in the mid 17th century, possibly by the Boteler family, restored in 1883 for Captain William Edward Freeman O'Brien and restored again in 1908-09 for Vernon A. Malcolmson. The house is now a luxury apartment block. It is a Grade I listed building.[1]

The building consists of a long rectangular block in two storeys with cellars and attics and two large gabled stair wings at the rear. The ground floor walls are made of flint, banded with brick and with brick dressings. The first floor has timber framing, infilled and faced with brick. The roof is steep and made of red tiles.[2]

Caddington was held in two manors Major (Great) Caddington and Minor Caddington.[3] The Manor of Aston Bury in Bedfordshire was given to the Church of St. Paul's by King Athelstan between 926-941.[4] Caddington or Cadendone as originally spelled was first registered in the Domesday Book of 1066 with its Lord of the Manor being Leofwin the noble of Caddington. The Overlord was King Edward the Confessor (1024-1066). In the Domesday Book of 1086 the Lords of the Manor were the Canons of London of St. Paul's Cathedral with the Tenant-in-Chief being the same.[5][6]

Aston Bury manor belonged to the monks of St Mary, Reading when it was seized by the Crown at the Dissolution of the Monasteries and leased to Sir Philip Boteler of Watton Woodhall (High Sheriff of Hertfordshire in 1533 and 1540). The manor then descended in the Boteler family until John Palmer Boteler sold it to Sir Thomas Rumbold. It then passed through various hands to Captain William Edward Freeman O'Brien, who sold it in 1907 to Mr. Vernon A. Malcolmson.[7] Malcolmson died in 1948 and his son sold the house to Paul Petrocokino, a leading Member of Moral Re-Armament.

In 1973 Hertfordshire County Council began converting the house to a teacher training centre but after the scheme was abandoned it was converted instead (in 1989) into eleven luxury apartments.[8]