Astrid Sofia Lovisa Thyra of Sweden (17 November 1905 – 29 August 1935) was Queen consort of the Belgians as the wife of King Leopold III. By birth she was a princess of the Sweden's royal House of Bernadotte. Her grandsons include King Philippe of Belgium and Henri, Grand Duke of Luxembourg.

Astrid was born at her parents' home of Arvfurstens Palats in Stockholm on 17 November 1905, the third daughter of Prince Carl, Duke of Västergötland, and his wife Princess Ingeborg of Denmark. Her father was the younger brother of King Gustav V of Sweden, and her mother was the sister of King Christian X of Denmark and of King Haakon VII of Norway. 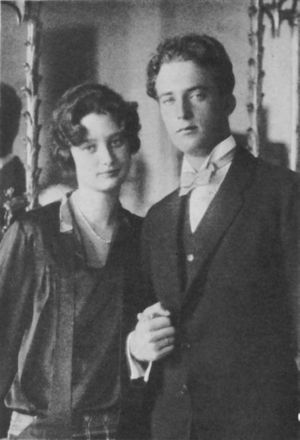 As an eligible princess, Astrid was mentioned as a potential bride for a number of princes including the future Edward VIII of Great Britain and the future Olav V of Norway. Astrid's successful suitor was Crown Prince Leopold of Belgium.

In September 1926, their engagement was announced. King Albert I and Queen Elisabeth of Belgium invited the press to the royal palace in Brussels. "The Queen and I," declared Albert, "would like to announce to you the impending marriage between Prince Leopold, Duke of Brabant and the Princess Astrid of Sweden. We are convinced that the princess will bring joy and happiness to our son. Leopold and Astrid have decided to join their lives without any pressures or reasons of state. Theirs is a true union among people with the same inclinations." Queen Elisabeth, incorrigible romantic that she was, insisted in saying "It is a marriage of love... tell it to our people. Nothing was arranged. Not a single political consideration prevailed in our son's decision."

In Stockholm on 4 November 1926 civilly and in Cathedral of St. Michael and St. Gudula, Brussels on 10 November religiously, Princess Astrid married Crown Prince Leopold of Belgium, the son of King Albert I of Belgium and his wife, Queen Elisabeth, born Duchess Elisabeth in Bavaria. The couple travelled separately to Antwerp after their civil marriage, to be reunited in Belgium.

Princess Astrid was given a tiara as a wedding gift from the Belgian government, created by Belgian jeweler Van Bever, the original version of the diadem is a flexible diamond bandeau in a stylized Greek key motif topped with 11 large diamonds on spikes. These large stones, totaling around 100 carats on their own, symbolize the nine provinces of Belgium and the (now former) Belgian colony of the Congo. She later added a set of diamond arches to enclose each of the 11 independent stones. After Astrid’s death the tiara was in the possession of King Leopold, and his second wife Princess Lilian wore parts of the tiara but not the full gem (Lilian never held the title of Queen). Leopold abdicated the throne in favor of his son Baudouin; when Baudouin married, Leopold gave the tiara to the new queen. Fabiola, Belgium’s first queen since Astrid, wore it on her wedding day. She handed the jewel over after Baudouin’s death to be worn by Queen Paola who, after the abdication pf her husband Albert, gave it to Mathilde new Queen of the Belgians.

Astrid was enthusiastically adopted by the Belgians. She was widely loved for her beauty, charm and simplicity. Her public and official engagements radiated enthusiasm. Leopold was her most fervent admirer. The love shared by the young couple was evident to all. On more than one occasion people could see them holding hands, even during official engagements. In 1927, Leopold and Astrid had a daughter, Princess Joséphine-Charlotte. In 1930, the Belgian press gave extensive coverage to the birth of the long awaited royal heir. Leopold was on his way to visit some areas away from Brussels when the Duchess of Brabant went into labor. The royal palace immediately sent him a telegram that reached Leopold at a stop during his journey. The royal palace's message announced the impending birth of the couple's second child. Without thinking twice about the day's engagements, Leopold returned to Brussels immediately. Prince Leopold and King Albert walked anxiously in the garden at Stuyvenberg Palace while the Duchess of Brabant began her labor. Next to Astrid were her mother, Ingeborg of Denmark, duchess of Västergötland, and her mother-in-law Queen Elisabeth. At 4:15 pm the royal physicians proudly announced the healthy birth of a little prince. The sound of a cannon silenced the general happiness expressed by the people of Brussels. Their first son, Prince Baudouin eventually succeeded his father as King of the Belgians. He was given the name of Baudouin in memory of his deceased great-uncle who was supposed to have become king.

At Stuyvenberg, not far away from the Royal Palace of Laeken, the young Duchess of Brabant, raised in the simplicity of the Scandinavian courts, joyfully raised her growing family. At a small villa in the palace grounds, Astrid cooked for her family. And every time she could, Astrid would stroll along the Avenue Louise with her children. The Court Marshall vehemently protested against these promenades. "They break protocol," he would say. Yet in her simplicity, Astrid would retort by saying "But I'm just another mother, am I not?" She even went as far as joining the crowds during a military revue in an effort to see her promenading husband at the head of his regiment.

Raised as a Lutheran, Astrid converted to Catholicism after marrying Prince Leopold. She had initially considered converting to Catholicism, simply because it was the religion of Belgium, but the priest she consulted, Father William Hemmick, told her not to do so until she genuinely believed it was the true religion.[2] Astrid learned more about Catholicism and, several years later, in 1930, converted from genuine conviction. Her decision made her happy, and she confided to a close childhood friend: "My soul has found peace."[3] Her father-in-law, King Albert, who was very devout himself, repeated, on the day of Astrid's conversion: "I am glad, very glad. Now all the family is united in the same religion."[4]

On February 17, 1934, King Albert died in a mountain-climbing accident in Marche-les-Dames, Belgium. Leopold and Astrid became the new King and Queen of the Belgians with the style of Majesty. Later that year, the third child of Leopold and Astrid was born. He was named Albert after his grandfather, and would eventually succeed his brother Baudouin as King of the Belgians.

As Queen, Astrid dedicated her time to raising her family and promoting social causes. She was very concerned with the situation of women, children, and the disadvantaged. During an economic crisis in Belgium in 1935, she organized a collection of clothing and food for the poor. She did this through an open letter, which was published as the "Queen’s Appeal".

In August 1935, the King and Queen went incognito to Switzerland on holiday. Prince Albert remained in Brussels. Only one year old, he was considered too young for the journey. Joséphine-Charlotte and Baudouin had travelled with their parents to their holiday home, Villa Haslihorn in Horw, Switzerland. The children were sent back to Belgium with their nannies on 28 August. On 29 August 1935, the King and Queen decided to go for a last hike in the mountains before returning home. Their chauffeur was sitting in the back of the Packard One-Twenty convertible, the King was driving and the Queen looking at a map. As the Queen pointed out something to her husband the car went off the road, down a steep slope, and slammed into a pear tree. Queen Astrid had opened her door to try to get out, but she was thrown out upon impact. Her body collided with the trunk of the tree, while the car slammed into a second tree. King Leopold was thrown out of the car as well, but he was only lightly injured. The car went on, only to stop in a lake. It was 9:30 am on 29 August 1935. The Queen died from her injuries at the scene of the accident at Küssnacht am Rigi, near Lake Lucerne, Schwyz, Switzerland.

Queen Astrid is interred in the royal vault at the Church of Our Lady of Laeken, Brussels, beside her husband, King Leopold III of the Belgians, and his second wife, Princess Lilian of Belgium.

The queen was deeply mourned by her husband, King Leopold, by the Belgians, and by the Swedes. In 1935, the Belgian postal authorities issued a postage stamp showing her portrait outlined in black, known as the Astrid Mourning issue. Later that same year, it released a series of anti-tuberculosis fund stamps with the same design.[5]

A commemorative chapel was built in Switzerland at the site of the crash. The chapel has become a destination for Swedish and Belgian tourists. A museum nearby holds images and memorabilia of the event, including a shard from the windscreen and the log of the pear tree. The tree itself was felled by a storm in 1992. The car was sunk at a deep part of the Vierwaldstättersee at the request of the king.[6]

As of May 2015[update] two of her grandchildren were reigning simultaneously; King Philippe of the Belgians and Grand Duke Henri of Luxembourg. She was also a maternal aunt of Harald V of Norway. Her great granddaughter Princess Elisabeth, Duchess of Brabant bears a strong resemblance of her when she was her age.

The popular Swedish layer cake Princess cake was named after Astrid and her two sisters when they were children.