From Infogalactic: the planetary knowledge core
Jump to: navigation, search
Not to be confused with cosmolabe. 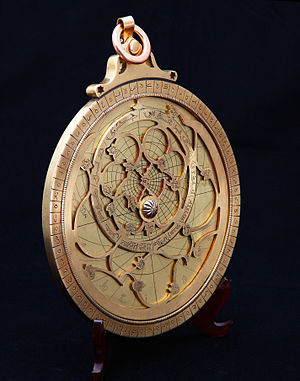 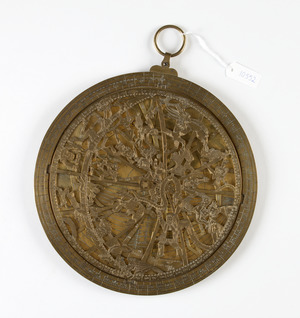 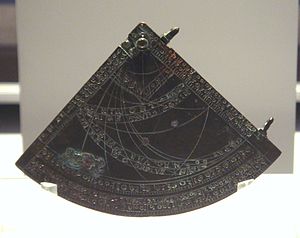 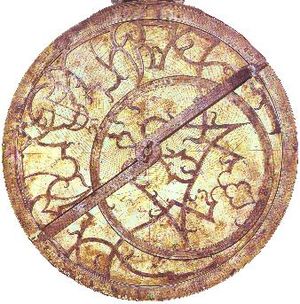 A 16th-century astrolabe, showing a tulip rete and rule.

An astrolabe (Greek: ἀστρολάβος astrolabos, "star-taker")[1] is an elaborate inclinometer, historically used by astronomers and navigators, to measure the inclined position in the sky of a celestial body, day or night. It can thus be used to identify stars or planets, to determine local latitude given local time and vice versa, to survey, or to triangulate. It was used in classical antiquity, the Islamic Golden Age,[2] the European Middle Ages and the Renaissance for all these purposes.

While the astrolabe is effective for determining latitude on land or calm seas, it is less reliable on the heaving deck of a ship in rough seas. The mariner's astrolabe was developed to solve that problem.

OED gives the translation "star-taker" for the English word "astrolabe" and traces it, through medieval Latin, to the Greek word astrolabos[1][3] from astron "star" and lambanein "to take".[4] In the medieval Islamic world the word "asturlab" (i.e. astrolabe) was given various etymologies. In Arabic texts, the word is translated as "akhdh al-kawakib" (lit. "taking the stars") which corresponds to an interpretation of the Greek word.[5]

Al-Biruni quotes and criticizes the medieval scientist Hamzah al-Isfahani who had stated:[5] "asturlab is an arabization of this Persian phrase" (sitara yab, meaning "taker of the stars").[6] In medieval Islamic sources, there is also a "fictional" and popular etymology of the words as "lines of lab". In this popular etymology, "Lab" is a certain son of Idris (=Enoch). This etymology is mentioned by a 10th-century scientist named al-Qummi but rejected by al-Khwarizmi.[7]

An early astrolabe was invented in the Hellenistic world by Apollonius of Perga, around 220 BC or in 150 BC and is often attributed to Hipparchus. A marriage of the planisphere and dioptra, the astrolabe was effectively an analog calculator capable of working out several different kinds of problems in spherical astronomy. Theon of Alexandria (c. 335 – c. 405) wrote a detailed treatise on the astrolabe, and Lewis[8] argues that Ptolemy used an astrolabe to make the astronomical observations recorded in the Tetrabiblos. Some historians attribute the astrolabe's invention to Hypatia, the daughter of Theon of Alexandria,[9] noting that Synesius, a student of Hypatia, credits her for the invention in his letters.[10]

Astrolabes continued in use in the Greek-speaking world throughout the Byzantine period. About 550 AD the Christian philosopher John Philoponus wrote a treatise on the astrolabe in Greek, which is the earliest extant Greek treatise on the instrument.[lower-alpha 1] In addition, Severus Sebokht, a bishop who lived in Mesopotamia, also wrote a treatise on the astrolabe in Syriac in the mid-7th century.[lower-alpha 2] Severus Sebokht refers in the introduction of his treatise to the astrolabe as being made of brass, indicating that metal astrolabes were known in the Christian East well before they were developed in the Islamic world or the Latin West.[11] 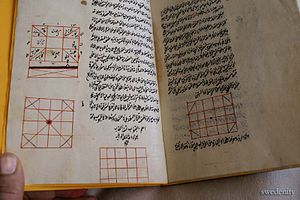 A treatise explaining the importance of the astrolabe by Nasir al-Din al-Tusi, Persian scientist. 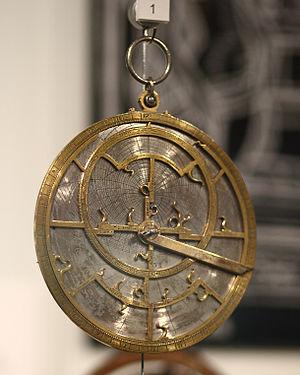 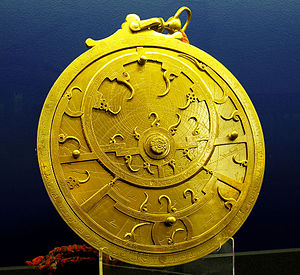 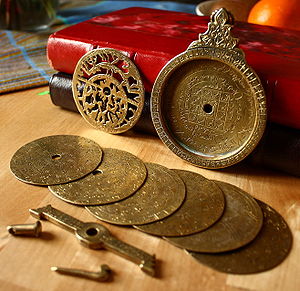 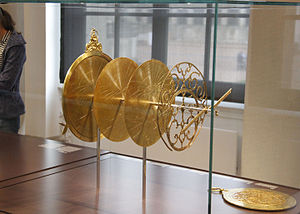 Exploded view of an astrolabe

Animation showing how celestial and geographic coordinates are mapped on an astrolabe's tympan through a stereographic projection. Hypothetical tympan (40 degrees North Latitude) of a 16th-century European planispheric astrolabe.

Astrolabes were further developed in the medieval Islamic world, where Muslim astronomers introduced angular scales to the astrolabe,[12] adding circles indicating azimuths on the horizon.[13] It was widely used throughout the Muslim world, chiefly as an aid to navigation and as a way of finding the Qibla, the direction of Mecca. The first person credited with building the astrolabe in the Islamic world is reportedly the 8th-century mathematician Muhammad al-Fazari.[14]

The mathematical background was established by the Muslim astronomer Albatenius in his treatise Kitab az-Zij (c. 920 AD), which was translated into Latin by Plato Tiburtinus (De Motu Stellarum). The earliest surviving dated astrolabe is dated AH 315 (927–8 AD).[15] In the Islamic world, astrolabes were used to find the times of sunrise and the rising of fixed stars, to help schedule morning prayers (salat). In the 10th century, al-Sufi first described over 1,000 different uses of an astrolabe, in areas as diverse as astronomy, astrology, navigation, surveying, timekeeping, prayer, Salat, Qibla, etc.[16][17] 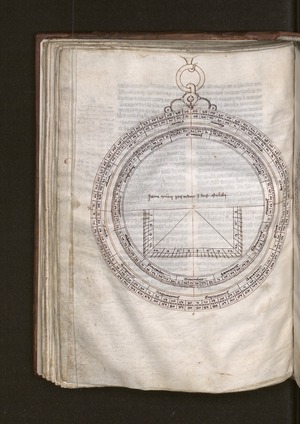 The spherical astrolabe, a variation of both the astrolabe and the armillary sphere, was invented during the Middle Ages by astronomers and inventors in the Islamic world.[lower-alpha 3] The earliest description of the spherical astrolabe dates back to Al-Nayrizi (fl. 892–902). In the 12th century, Sharaf al-Dīn al-Tūsī invented the linear astrolabe, sometimes called the "staff of al-Tusi", which was "a simple wooden rod with graduated markings but without sights. It was furnished with a plumb line and a double chord for making angular measurements and bore a perforated pointer".[18] The first geared mechanical astrolabe was later invented by Abi Bakr of Isfahan in 1235.[19]

Peter of Maricourt, in the last half of the 13th century, also wrote a treatise on the construction and use of a universal astrolabe (Nova compositio astrolabii particularis). Universal astrolabes can be found at the History of Science Museum in Oxford.

The English author Geoffrey Chaucer (c. 1343–1400) compiled a treatise on the astrolabe for his son, mainly based on Messahalla. The same source was translated by the French astronomer and astrologer Pélerin de Prusse and others. The first printed book on the astrolabe was Composition and Use of Astrolabe by Christian of Prachatice, also using Messahalla, but relatively original.

In 1370, the first Indian treatise on the astrolabe was written by the Jain astronomer Mahendra Suri.[20]

The astrolabe was almost certainly first brought north of the Pyrenees by Gerbert of Aurillac (future Pope Sylvester II), where it was integrated into the quadrivium at the school in Reims, France, sometime before the turn of the 11th century.[24] In the 15th century, the French instrument-maker Jean Fusoris (fr) (c. 1365–1436) also started remaking and selling astrolabes in his shop in Paris, along with portable sundials and other popular scientific devices of the day. Thirteen of his astrolabes survive to this day.[25] One more special example of craftsmanship in the early 15th-century Europe is the astrolabe dated 1420, designed by Antonius de Pacento and made by Dominicus de Lanzano.[26]

In the 16th century, Johannes Stöffler published Elucidatio fabricae ususque astrolabii, a manual of the construction and use of the astrolabe. Four identical 16th-century astrolabes made by Georg Hartmann provide some of the earliest evidence for batch production by division of labor.

At first mechanical astronomical clocks were influenced by the astrolabe; in many ways they could be seen as clockwork astrolabes designed to produce a continual display of the current position of the sun, stars, and planets. For example, Richard of Wallingford's clock (c. 1330) consisted essentially of a star map rotating behind a fixed rete, similar to that of an astrolabe.[27]

Many astronomical clocks, such as the famous clock at Prague, use an astrolabe-style display, adopting a stereographic projection (see below) of the ecliptic plane. 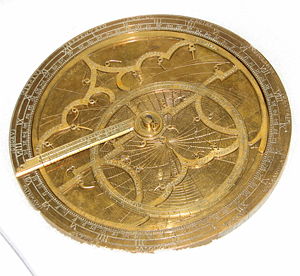 The Hartmann astrolabe in Yale collection. This instrument shows its rete and rule. 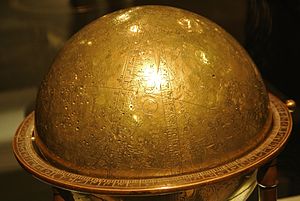 Celestial Globe, Isfahan (?), Iran 1144. Shown at the Louvre Museum, this globe is the third oldest surviving in the world. 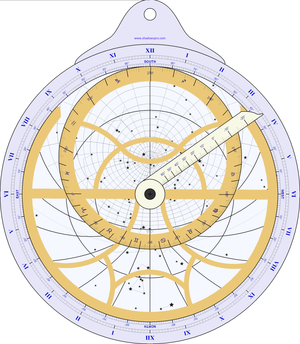 An astrolabe consists of a disk, called the mater (mother), which is deep enough to hold one or more flat plates called tympans, or climates. A tympan is made for a specific latitude and is engraved with a stereographic projection of circles denoting azimuth and altitude and representing the portion of the celestial sphere above the local horizon. The rim of the mater is typically graduated into hours of time, degrees of arc, or both.[28]

Above the mater and tympan, the rete, a framework bearing a projection of the ecliptic plane and several pointers indicating the positions of the brightest stars, is free to rotate. These pointers are often just simple points, but depending on the skill of the craftsman can be very elaborate and artistic. There are examples of astrolabes with artistic pointers in the shape of balls, stars, snakes, hands, dogs' heads, and leaves, among others.[29] The names of the indicated stars were often engraved on the pointers in Arabic or Latin.[30] Some astrolabes have a narrow rule or label which rotates over the rete, and may be marked with a scale of declinations.

The rete, representing the sky, functions as a star chart. When it is rotated, the stars and the ecliptic move over the projection of the coordinates on the tympan. One complete rotation corresponds to the passage of a day. The astrolabe is therefore a predecessor of the modern planisphere.

On the back of the mater there is often engraved a number of scales that are useful in the astrolabe's various applications. These vary from designer to designer, but might include curves for time conversions, a calendar for converting the day of the month to the sun's position on the ecliptic, trigonometric scales, and a graduation of 360 degrees around the back edge. The alidade is attached to the back face. An alidade can be seen in the lower right illustration of the Persian astrolabe above. When the astrolabe is held vertically, the alidade can be rotated and the sun or a star sighted along its length, so that its altitude in degrees can be read ("taken") from the graduated edge of the astrolabe; hence the word's Greek roots: "astron" (ἄστρον) = star + "lab-" (λαβ-) = to take.