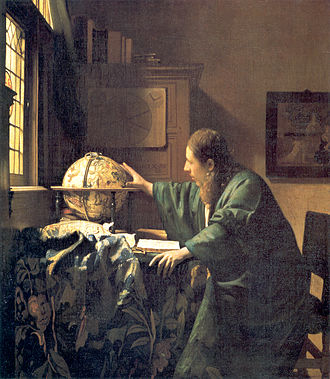 The Astronomer by Johannes Vermeer

An astronomer is a scientist in the field of astronomy who studies stars, planets, moons, comets, and galaxies, as well as many other celestial objects — either in Observational astronomy, in analyzing the data or in theoretical astronomy. A related but distinct subject, cosmology, is concerned with studying the Universe as a whole. An astronomer researches the world beyond Earth.

For subdisciplines, see Outline of astronomy. 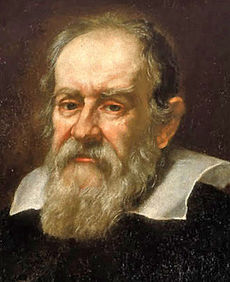 Galileo is often referred to as the Father of modern astronomy 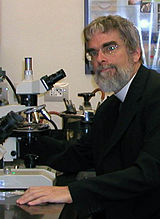 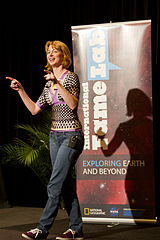 Emily Lakdawalla at the Planetary Conference 2013

Historically, astronomy was more concerned with the classification and description of phenomena in the sky, while astrophysics attempted to explain these phenomena and the differences between them using physical laws. Today, that distinction has mostly disappeared and the terms "astronomer" and "astrophysicist" are interchangeable. Professional astronomers are highly educated individuals who typically have a PhD in physics or astronomy and are employed by research institutions or universities.[1] They spend the majority of their time working on research, although they quite often have other duties such as teaching, building instruments, or aiding in the operation of an observatory.

The number of professional astronomers in the United States is actually quite small. The American Astronomical Society, which is the major organization of professional astronomers in North America, has approximately 7,000 members. This number includes scientists from other fields such as physics, geology, and engineering, whose research interests are closely related to astronomy.[2] The International Astronomical Union comprises almost 10,145 members from 70 different countries who are involved in astronomical research at the PhD level and beyond.[3]

Contrary to the classical image of an old astronomer peering through a telescope through the dark hours of the night, it is far more common to use a charge-coupled device (CCD) camera to record a long, deep exposure, allowing a more sensitive image to be created because the light is added over time. Before CCDs, photographic plates were a common method of observation. Modern astronomers spend relatively little time at telescopes usually just a few weeks per year. Analysis of observed phenomena, along with making predictions as to the causes of what they observe, takes the majority of observational astronomers' time.

Astronomers who serve as faculty spend much of their time teaching undergraduate and graduate classes. Most universities also have outreach programs including public telescope time and sometimes planetariums as a public service to encourage interest in the field.

While there is a relatively low number of professional astronomers, the field is popular among amateurs. Most cities have amateur astronomy clubs that meet on a regular basis and often host star parties. The Astronomical Society of the Pacific is the largest general astronomical society in the world, comprising both professional and amateur astronomers as well as educators from 70 different nations.[4] Like any hobby, most people who think of themselves as amateur astronomers may devote a few hours a month to stargazing and reading the latest developments in research. However, amateurs span the range from so-called "armchair astronomers" to the very ambitious, who own science-grade telescopes and instruments with which they are able to make their own discoveries and assist professional astronomers in research.