Astorga is a town in the province of León, northern Spain. It lies 27 miles southwest of the provincial capital of León, and is the head of the council (comarca) of La Maragatería.The river Tuerto flows through it. As of 2009[update], its population was about 12,242 people. It is the 5th most populated municipality in province of Leon which has over 211 municipalities. Astorga pre dates the 910 AD Kingdom of León by 875 years.

Astorga lies in the area of the Maragatos, a small ethnic and cultural community with distinctive customs and architecture. The town lies along the French route of the Way of St. James (Spanish: Camino de Santiago). Saint Turibius of Astorga was bishop of the city in the 5th century. 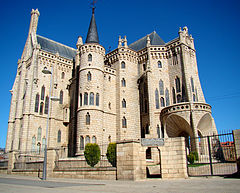 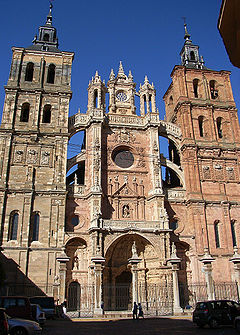 The timeline of Galician history that includes Astorga has artifactual evidence stretching back over 200,000 years, predating the Paleolithic. 130 miles away from Astorga in the Atapuerca Mountains (Sierra de Atapuerca) exists a rich fossil record of the earliest humanoids in Spain. The scientific study of these remains provide priceless information about the appearance and the way these humanoids lived. The regional government of Castile and León has designated the site an Espacio cultural.

Tin artifacts dated to c. 2750 BC using metallurgical diffusion chronologic dating were found in the area of Astorga. Artifacts such as tube and double ring axes were located in Astorga and are significant to an Atlantic cultural complex from the Bronze Age period c. 1300–700 BC that are included in the Castro cultures.