Atatürk Boulevard (Turkish: Atatürk Bulvarı) is the most important avenue in Ankara; Turkey. The boulevard is also known as "protocol road" because it is used by many politicians and high state officials.[citation needed] 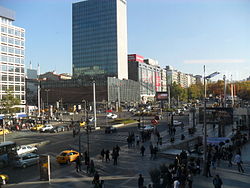 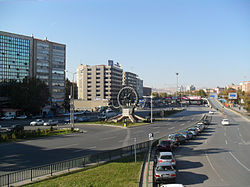 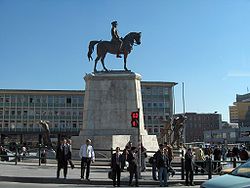 After the Turkish Republic was proclaimed, Ankara was redesigned by a group of urban planners including Hermann Jansen. Atatürk Boulevard was developed after this planning.[1] But according to Falih Rıfkı Atay, the original plan was implemented after much alterations.[2]

The squares on the boulevard

Beginning from the south the first big square is to the west of Kuğulu Park a small but a popular public park known for its swan lake. The second square is on the intersection with Eskişehir Boulevard which leads to ringroad around Ankara. Both squares have underpasses to ease the traffic flow. Kızılay Square is usually considered to be the center of Ankara. It is also the terminus of Ankara subway line from the north and also the middle station of Ankaray (lighter version of subway). Zafer Square is known by a statue of Atatürk. Sıhhiye Square is one of the busiest transportation points of Ankara with buses, subway and train. The Hitit Anıtı (Hittite Monument) is also in Sıhhiye Square. Northern still are the İtfaiye Square and Ulus Square. In Ulus Square there is a Monument of Victory, with Atatürk as its centerpiece.