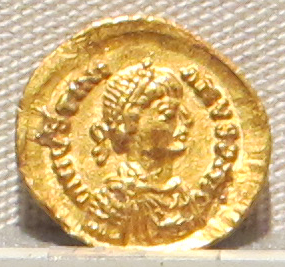 Golden coin of Theodatus and Athalaric, depicting emperor Justinian I

Athalaric (516 – 2 October 534) was the King of the Ostrogoths in Italy. He was a son of Eutharic and Amalasuntha. His maternal grandfather was Theoderic the Great. He succeeded his grandfather as king in 526.[1]

As Athalaric was only ten years old, the regency was assumed by his mother, Amalasuntha. His mother attempted to provide for him an education in the Roman tradition, but the Gothic nobles pressured her to allow them to raise him as they saw fit. As a result, Athalaric drank heavily and indulged in vicious excesses, which ruined his constitution.[1]