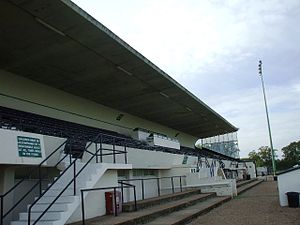 The one and only stand at Athletic Ground, Richmond

The Athletic Ground, Richmond is a rugby ground, managed by Richmond Athletic Association, home to National League One side Richmond F.C. and the RFU Championship side London Scottish. The first team pitch has a stand capable of seating around 1,000 people, though in the past temporary stands have been erected in the considerable space around the pitch to boost the seated capacity.

The original facilities include six other pitches and two bars which are available for hire, a canteen, changing rooms, a physio room, a shop and offices. Part of Old Deer Park, a huge continuous leisure area, the Athletic Ground was bordered by Richmond Swimming Pool, Royal Mid-Surrey Golf Club, a gym and health centre, and also a driving range. Three pitches have been marked out on the driving range which closed down in the 1990s as did Richmond Bowls Club which is now used as a play area for neighbouring Falcons School.

The complex has considerable parking facilities for its size, and is often used as a stop-off for fans on their way to Twickenham Stadium.

England played ten Test matches at the Athletic Ground between 1891 and 1909. In five of those matches against Scotland (listed below), England failed to win:

In the association football code England enjoyed more success against Scotland, playing one match here in 1893 as part of the 1893 British Home Championship and winning 5-2.[1]