From Infogalactic: the planetary knowledge core
Jump to: navigation, search
File:Atlantropa.jpg
An artist's conception of what Atlantropa might have looked like, as seen from space.

Atlantropa, also referred to as Panropa,[1] was a gigantic engineering and colonisation idea devised by the German architect Herman Sörgel in the 1920s and promoted by him until his death in 1952. Its central feature was a hydroelectric dam to be built across the Strait of Gibraltar, which would have provided enormous amounts of hydroelectricity[2] and would have led to the lowering of the surface of the Mediterranean Sea by up to 200 metres (660 ft), opening up large new lands for settlement, for example in the Adriatic Sea. The project proposed four additional major dams as well:[3][4][5]

Sörgel saw his scheme, projected to take over a century, as a peaceful European-wide alternative to the Lebensraum concepts which later became one of the stated reasons for Nazi conquest of new territories. Atlantropa would provide land and food, employment, electric power, and most of all, a new vision for Europe and neighbouring Africa.

The Atlantropa movement, through its several decades, was characterised by four constants:[6]

Active support was limited to architects and planners from Germany and a number of other primarily northern European countries. Critics derided it for various faults, ranging from lack of any actual cooperation of Mediterranean countries in the planning to the impacts it would have had on the historic coastal communities left stranded inland when the sea receded. The project reached great popularity in the late 1920s/early 1930s, and for a short period again, in the late 1940s/early 1950s, but soon disappeared from general discourse again after Sörgel's death.[8]

File:Map of the Atlantrop Projekt en.png
Outline map of the various hydroelectricity and land reclamation projects combined in Atlantropa. 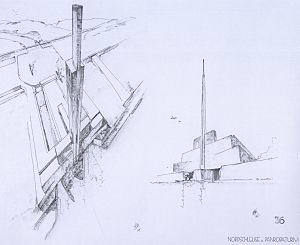 The plan was inspired by the coeval understanding of the Messinian salinity crisis,[9] a pan-Mediterranean geological event that took place 5 to 6 million years ago.[10] The contemporary geologists proposed that the large salt deposits surrounding the Mediterranean coast were the result of its partial isolation by a shrinking of the seaways connecting to the Atlantic. Today it is a majority opinion among geoscientists that the Mediterranean underwent a significant drawdown during that period.[11]

The Utopian goal was to solve all the major problems of European civilisation by the creation of a new continent, "Atlantropa", consisting of Europe and Africa and to be inhabited by Europeans (who were supposed to flourish under the effects of the climate changes, as opposed to Africa's native populations).[citation needed] Sörgel was convinced that to remain competitive with the Americas and an emerging Oriental "Pan-Asia", Europe must become self-sufficient, and this meant possessing territories in all climate zones. Asia would forever remain a mystery to Europeans, and the British would not be able to maintain their global empire in the long run – hence a common European effort to colonise Africa was necessary.[12] The lowering of the Mediterranean would enable the production of immense amounts of electric power, guaranteeing the growth of industry. Unlike fossil fuels, this power source would not be subject to depletion. Vast tracts of land would be freed for agriculture – including the Sahara desert, which was to be irrigated with the help of three sea-sized man-made lakes throughout Africa. The massive public works, envisioned to go on for more than a century, would relieve unemployment and the acquisition of new land would ease the pressure of overpopulation, which Sörgel thought were the fundamental causes of political unrest in Europe. Sörgel also believed the project's effect on the climate could only be beneficial.[13] The Middle East under the control of a consolidated Atlantropa would be an additional energy source and a bulwark against the Yellow Peril.[14]

The publicity material produced for Atlantropa by Sörgel and his supporters contain plans, maps, and scale models of several dams and new ports on the Mediterranean, views of the Gibraltar dam crowned by a 400-metre tower designed by Peter Behrens, projections of the growth of agricultural production, sketches for a pan-Atlantropan power grid, and even provision for the protection of Venice as a cultural landmark.[15] Concerns about climate change, earthquakes, attacks and the fate of African culture were often ignored as being unimportant.[citation needed] Sörgel's 1938 book Die Drei Grossen A has a quote from Hitler on the flyleaf, demonstrating that the concept was not inconsistent with Nazi ideology.

After the Second World War, interest was piqued again as the Western Allies sought to create closer bonds with Africa and combat communism, but the invention of nuclear power, the cost of rebuilding, and the end of colonialism left Atlantropa technologically unnecessary and politically unfeasible, although the Atlantropa Institute remained in existence until 1960.[15] It is now known that the result of such a plan would mostly be to create salt flats, unsuitable for growing crops.[citation needed]

Most proposals to dam the Strait of Gibraltar since that time have focused on the hydroelectric potential of such a project, and do not envisage any substantial lowering of the Mediterranean sea level. A new idea involving a tensioned fabric dam stretched between Europe and North Africa in the Gibraltar Strait could cope with any future global sea-level rise outside of the Mediterranean Sea Basin. And, the MOSE project to protect Venice, Italy would thereby be made obsolete and unnecessary.[16]

In Gene Roddenberry's novelisation of Star Trek: The Motion Picture, the Strait of Gibraltar has been dammed. Roddenberry may have borrowed the idea from Sörgel via the popular works of Willy Ley, whose book Engineers' Dreams describes both Atlantropa and Sörgel's other grand design, the forming of an inland sea in central Africa.[15]

In Philip K. Dick's 1962 prize-winning alternate history novel The Man in the High Castle, the Nazis, after winning World War II, embarked on "Project Farmland", wherein the Mediterranean Sea was dammed and drained. The project was completed under the direction of Baldur von Schirach, and was said to have reclaimed huge areas of farmland.[17]

In Arthur C. Clarke's novel Rendezvous with Rama, the Mediterranean is referenced to have been drained, providing a vast trove of archaeological finds, as well as land for new settlements.[18]

The video game Railroad Tycoon II: The Second Century features a series of futuristic scenarios set in the (at the time of the game's release) near future. Some of which centre on the construction of such a drainage project, the development of the new lands created by this, and later the management of a crisis that results in the basin becoming flooded again.