From Infogalactic: the planetary knowledge core
Jump to: navigation, search
For other uses, see Atlas (disambiguation). 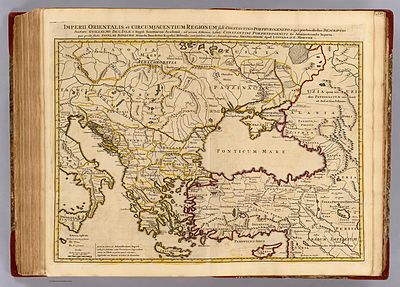 An atlas is a collection of maps; it is typically a map of Earth or a region of Earth, but there are atlases of the other planets (and their satellites) in the Solar System. Furthermore, atlases of anatomy exist, mapping out the human body or other organisms.[1] Atlases have traditionally been bound into book form, but today many atlases are in multimedia formats. In addition to presenting geographic features and political boundaries, many atlases often feature geopolitical, social, religious and economic statistics. They also have information about the map and places in it.

The word atlas dates from 1636, first in reference to the English translation of Atlas, sive cosmographicae meditationes de fabrica mundi (1585) by Flemish geographer Gerhardus Mercator, who might have been the first to use this word in this way. A picture of the Titan Atlas holding up the world appeared on the frontispiece of this and other early map collections.[2]

The first work that contained systematically arranged woodcut maps of uniform size, intended to be published in a book, thus representing the first modern atlas, was De Summa totius Orbis (1524–26) by the 16th-century Italian cartographer Pietro Coppo. Nonetheless, this distinction is conventionally awarded to the Flemish cartographer Abraham Ortelius who in 1570 published the collection of maps Theatrum Orbis Terrarum.[3]

A travel atlas is made for easy use during travel, and often has spiral bindings so it may be folded flat. It has maps at a large zoom so the maps can be reviewed easily. A travel atlas may also be referred to as a road map.[4]

A desk atlas is made similar to a reference book. It may be in hardback or paperback form.

With the coming of the global market, publishers in different countries can reprint maps from places made elsewhere. This means that the place names on the maps often use the designations or abbreviations of the language of the country in which the feature is located, to serve the widest market. For example, islands near Russia have the abbreviation "O." for "ostrov", not "I." for "island". This practice differs from what is standard for any given language, and it reaches its extremity concerning transliterations from other languages. In particular, German mapmakers use the transliterations from Cyrillic developed by the Czechs, which are hardly used in English-speaking countries. 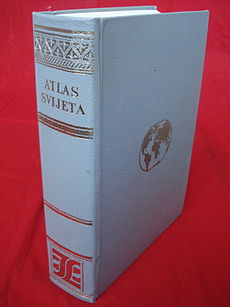 Some cartographically or commercially important atlases include the following: