From Infogalactic: the planetary knowledge core
Jump to: navigation, search
File:Klaus Fuchs ID badge.png
Klaus Fuchs, arguably the most important of the identified "atomic spies" for his extensive access to high-level scientific data and his ability to make sense of it through his technical training.

"Atomic spies" or "atom spies" were people in the United States, Great Britain, and Canada who are known to have illicitly given information about nuclear weapons production or design to the Soviet Union during World War II and the early Cold War. Exactly what was given, and whether everyone on the list gave it are still matters of some scholarly dispute, and in some cases, what were originally seen as strong testimonies or confessions were admitted as fabricated in later years. Their work constitutes the most publicly well-known and well-documented case of nuclear espionage in the history of nuclear weapons. There was a movement among nuclear scientists to share the information with the world scientific community, but it was firmly quashed by the U.S. government.

Confirmation about espionage work came from the Venona project, which intercepted and decrypted Soviet intelligence reports sent during and after World War II. They provided clues to the identity of several spies at Los Alamos and elsewhere, some of whom have never been identified. Some of this information was available but not usable in court for secrecy reasons during the 1950s trials. Additionally, records from Soviet archives, which were briefly opened to researchers after the fall of the Soviet Union, included more information about some spies.

Before the beginning of World War II, the theoretical possibility for nuclear fission was a highly discussed topic among the top physicists in the world. Scientists from the Soviet Union were later recognized for their contributions to the understanding of a nuclear reality, and were awarded several Nobel Prizes. Igor Kurchatov, L. D. Landau, and Kirill Sinelnikov were among those Soviet scientists that helped establish, and prove the existence of a splittable atom. Dwarfed by and lost upon the scale of the Manhattan Project, the significance of the contributions are rarely understood, and credited, outside of the field of physics. According to several sources, it was understood on a theoretical level that the atom provided for extremely powerful and novel releases of energy, and could possibly be utilized in the future for military purposes.[1] In recorded comments made by the physicists themselves, they lamented over their inability to achieve any kind of practical application from the discoveries. This would show that the scientists thought the creation of an atomic weapon was a pipe dream and untenable. According to a US Congressional joint committee, although the scientists could conceivably have been first to generate a man-made fission reaction, in reality they lacked the ambition, funding, engineering capability, leadership, and ultimately, the capability to do so. The undertaking would be of an unimaginable scale, and the resources required to engineer for such use as a nuclear bomb, and nuclear power were deemed too great to pursue.[2]

The United States, in collaboration with Britain and Canada, correctly recognized the significance of an atomic bomb at the urging of Albert Einstein and Leo Szilard through their Einstein–Szilárd letter of August 2, 1939, and embarked in 1942 upon a race to acquire a usable device. During the quest to create the atomic bomb it is estimated that $2 billion, eighty-six thousand tons of silver, and twenty-four thousand skilled workers drove the research and development phase of the project.[3] Those skilled workers included the people to maintain and operate the machinery necessary for research. The largest Allied facility had five hundred scientists working on the project as well as a team of fifty to derive the equations for the cascade of neutrons required to drive the reaction. The state of a fledgling Soviet program was quite different, and the program consisted of fifty scientists, and a mere two mathematicians trying to work out the equations for the particle cascade.[4] The research and development of techniques to produce sufficiently enriched uranium and plutonium were beyond the scope and efforts of the team. The knowledge of techniques and strategies that were being employed in the Allied programs that the Soviet Union procured intelligence on by means of espionage might have played a role in the rapid development of the Soviet bomb after the war.

The research and development of methods suitable for doping and separating the highly reactive isotopes needed to create the payload for a nuclear warhead took years, and consumed a vast amount of resources. The Allies of the United States and Great Britain dedicated their best scientists to this cause and constructed three plants, each with a different isotope extraction method.[5] The Allied program decided to use a gas phase extraction to obtain the pure uranium necessary for an atomic detonation.[2] To find this method it took large quantities of uranium ore and other rare materials such as graphite to successfully purify the U-235 isotope. The quantities required for the development were also beyond the scope and purview of the Soviet program.

The Soviet Union did not have natural uranium ore mines at the start of the nuclear arms race. A lack of materials made it very difficult to conduct novel research, and map out a clear pathway to achieving the fuel they needed. Efforts to produce Uranium fuel cheaply frustrated the scientists, and they found their industrial techniques for refinement lacking. The problem was eventually rectified through the use of information stolen from the Manhattan Project.[6] Without it, the problems the Soviet atomic team experienced would have taken many years to correct, affecting the end date of a Soviet atomic weapon significantly.

The missing link that explains the great leaps in the Soviets Union's atomic program is the espionage information and technical data Moscow was able to obtain from the Manhattan Project. Upon the realization of the American plans to develop an atomic bomb during the 1940s, Moscow began actively seeking agents to get information.[7] Moscow was very specific in asking for information from their intelligence cells in America and demanded updates on the progress of the Allied project. Moscow was also greatly concerned with the procedures being used for U-235 separation, what method of detonation was being used, and what industrial equipment was being used for these techniques.[8]

To obtain this information from the Manhattan Project, the Soviet Union needed spies that had security clearance high enough to have access to classified information and who could understand and interpret what they were stealing. Moscow also needed reliable spies who believed in the communist cause and would provide accurate information. One such Soviet spy was Theodore Hall, who had been a developer on the bombs dropped in Japan.[9] Hall gave up the specifications of the bomb dropped on Nagasaki. This information allowed the Soviet scientists a firsthand look at the successful set up of an atomic weapon built by the Allied team.

Although Hall's information was helpful to the Soviet cause, the most influential of the atomic spies was Klaus Fuchs. Fuchs was a German-born British physicist who was sent to America to work on the atomic project where he became one of the lead scientists. Fuchs became a member of the Communist Party while he was still a student in Germany. At the onset of World War II, Fuchs fled to Great Britain to escape the fighting, where he became one of the lead nuclear physicists in the British program and was later sent to collaborate on the Manhattan Project.[10] Due to Fuchs's position in the atomic program, he had access to most, if not all, of the material Moscow desired. Fuchs was also able to interpret and understand the information he was stealing, which made him an invaluable resource. Fuchs provided the Soviets with detailed information on the gas phase separation process. He also provided specifications for the pay load, calculations and relationships for setting of the fission reaction, and schematics for labs producing weapons grade isotopes.[11] This information helped the smaller under-manned and under-supplied Soviet scientists with a hard push in the direction of the successful detonation of a nuclear weapon.

The Soviet nuclear program would have eventually been able to develop a nuclear weapon without the aid of espionage.[citation needed] But a basic understanding of the usefulness of an atomic weapon, the sheer resources, and the talent weren't present until much later. The information passed helped the Soviet scientists identify which methods worked and prevented wasting valuable resources on techniques proven ineffective in the development of the American bomb. The speed at which the Soviet nuclear program achieved a working bomb with so few resources was driven by the amount of information acquired through espionage. During the Cold War trials it was touted as one of the most significant intelligence coups in the history of man.[12] 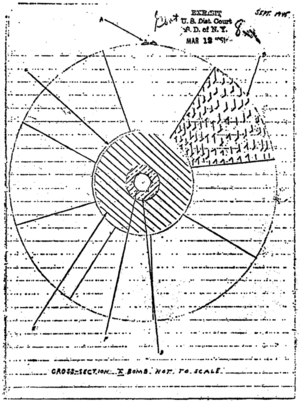 Sketch of an implosion-type nuclear weapon design made by David Greenglass as state's evidence, illustrating what he gave the Rosenbergs to pass on to the Soviet Union.