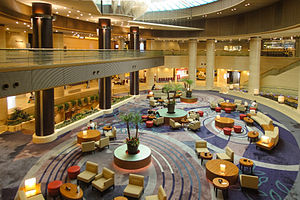 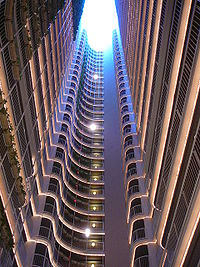 In architecture, an atrium (plural: atria or atriums) is a large open space located within a building.[1] Atria were a common feature in Ancient Roman dwellings, providing light and ventilation to the interior. Modern atria, as developed in the late 19th and 20th centuries, are often several stories high and having a glazed roof and/or large windows, and often located immediately beyond the main entrance doors (in the lobby).

Atria are a popular design feature because they give their buildings a "feeling of space and light".[quote without source] The atrium has become a key feature of many buildings in recent years.[when?] Atria are popular with building users, building designers and building developers. Users like atria because they create a dynamic and stimulating interior that provides shelter from the external environment while maintaining a visual link with that environment. Designers enjoy the opportunity to create new types of spaces in buildings, and developers see atria as prestigious amenities that can increase commercial value and appeal.[2] Fire control is an important aspect of contemporary atrium design due to criticism that poorly designed atria could allow fire to spread to a building's upper stories more quickly. 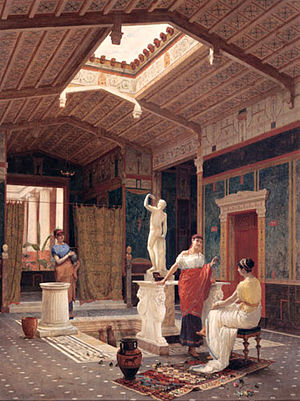 The Latin word atrium referred to the open central court, from which the enclosed rooms led off, in the type of large ancient Roman house known as a domus. The impluvium was the shallow pool sunken into the floor to catch the rainwater. Some surviving examples are beautifully decorated. The opening in the ceiling above the pool called for some means of support for the roof, and it is here where one differentiates between five different styles of atrium. As the centrepiece of the house, the atrium was the most lavishly furnished room. Also, it contained the little chapel to the ancestral spirits (lararium), the household safe (arca) and sometimes a bust of the master of the house.

The term was also used for a variety of spaces in public and religious buildings, mostly forms of arcaded courtyards, larger versions of the domestic spaces. Byzantine churches were often entered through such a space (as are many mosques, though the term is not usually used for Islamic architecture).

The 19th century brought the industrial revolution with great advances in iron and glass manufacturing techniques. Courtyards could then have horizontal glazing overhead, eliminating some of the weather elements from the space and giving birth to the modern atrium.

One of the main public spaces at Federation Square, in Melbourne, Australia, is called The Atrium and is a street-like space, five storeys high with glazed walls and roof. The structure and glazing pattern follow the system of fractals used to arrange the panels on the rest of the facades at Federation Square.

As of 2007, Dubai's Burj Al Arab, has the tallest atrium. The Burj Al Arab was built to impress and to iconize the urban development in the city of Dubai.