From Infogalactic: the planetary knowledge core
(Redirected from Atsugi Air Force Base)
Jump to: navigation, search

Naval Air Facility Atsugi (厚木海軍飛行場, Atsugi Kaigun-hikōjō?) (IATA: NJA, ICAO: RJTA) is a naval air base located in the cities of Yamato and Ayase in Kanagawa Prefecture, Japan. It is the largest United States Navy air base in the Pacific Ocean and houses the squadrons of Carrier Air Wing 5, which deploys with the aircraft carrier USS George Washington (CVN-73). Service members stationed at Atsugi also work in conjunction with the Kamiseya Naval Radio Receiving Facility. 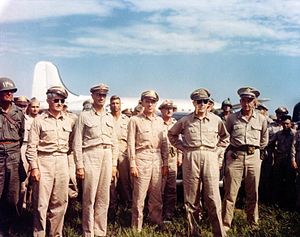 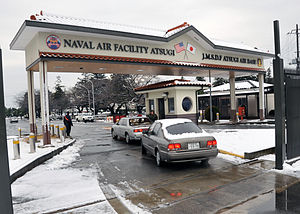 The Imperial Japanese Navy constructed the base in 1938 to house the Japanese 302 Naval Aviation Corps, one of Japan's most formidable fighter squadrons during World War II. Aircraft based at Atsugi shot down more than 300 American bombers during the firebombings of 1945[citation needed]. After Japan's surrender, many of Atsugi's pilots refused to follow Hirohito's order to lay down their arms, and took to the skies to drop leaflets on Tokyo and Yokohama urging locals to resist the Americans. Eventually, these pilots gave up and left Atsugi.

General Douglas MacArthur arrived at Atsugi on 30 August to accept Japan's surrender. Shortly afterwards, elements of the USAAF 3d Bombardment Group moved in about 8 September, being replaced by the USAAF 49th Fighter Group on 15 September which handled the initial cleanup of the heavily-damaged airfield along with the 1539th Army Air Forces Base Unit to provide station facilities. Minimal flight operations were restored by October which allowed the P-61 Black Widow-equipped 418th Night Fighter Squadron to operate from the airfield to provide air defense over the area, along with the P-38 Lightnings of the 49th FG. The 49th moved to Chitose Airfield on Hokkaido in mid February 1946, the 416th NFS to Okinawa in June, and on 31 December 1946 the 1539th AAFBU moved to Haneda Airfield.

During the occupation, the base housed the overflow from nearby Camp Zama; it was not refurbished to handle military air traffic until the Korean War. The Seabees (Navy construction battalions) came to the base in 1950 and prepared it for re-opening that December as Naval Air Station Atsugi.

NAF Atsugi was a major naval air base during both the Korean War and Vietnam War, serving fighters, bombers, and transport aircraft. One of the aircraft based at Atsugi at least since 1957[4] was the U-2 spy plane piloted by Gary Powers, which provoked an international incident when it was downed over the Soviet Union.

In 1964 a United States Marine Corps F8U-2 Crusader based at the airfield crashed in nearby Machida, Tokyo. The pilot ejected and was not seriously injured, but the crash killed four and injured 32 people on the ground and destroyed seven houses.[5]

In 1972, the U.S. and Japanese governments agreed to share ownership of the base.

On 2 November 1976, a US Navy Grumman C-1 Trader, piloted by Lt. Laury K. Backman, suffered a mechanical failure of the aileron system while maneuvering to land on runway 01, and crashed short of the runway. All six aboard were killed. [6]

In 1977, a McDonnell Douglas F-4 Phantom II based at the facility suffered a mechanical failure and crashed into a residential neighborhood in nearby Yokohama. The crew ejected and survived, but two young boys, aged 1 and 3, were killed and 7 others injured.[7]

Elements of the Naval Security Group and rotational squadrons of EP-3 Aries that are now stationed at Misawa Air Base were formerly stationed here until the 1990s.

On 14 November 2009 a fire in Hangar 183 at the base injured three Japanese employees of Obayashi Corporation. The fire was reported at 11:55 a.m. and was extinguished by 12:45 p.m. The hangar was moderately damaged.[8]

Personnel and aircraft from the base assisted with Operation Tomodachi following and during the March 2011 Tōhoku earthquake and tsunami and Fukushima I nuclear accidents. During the crisis, around 2,000 American family members voluntarily departed the base for locations outside Japan.[9]

Atsugi is named after the nearby city of Atsugi despite not actually being in Atsugi (it is separated from Atsugi by two other cities).

The name was chosen because Atsugi was the only large town in the area as of 1950, and the three farming villages surrounding the base at that time—Yamato Village, Ayase Village and Shibuya Village—shared names with better-known areas elsewhere in Japan. Yamato is an alternative name for the Nara region, Ayase is generally associated with the area around Ayase Station in northeast Tokyo, and Shibuya is generally associated with the ward of Shibuya in central Tokyo.

For more details on this topic, see Jinkanpo Atsugi Incinerator.

NAF Atsugi and the people stationed there gained notoriety in the 1990s (stemming from near-daily reports in the Pacific Stars and Stripes newspaper) due to their proximity to the Jinkanpo Atsugi Incinerator, which blew toxic and cancerous emissions over the high-rise buildings in its immediate vicinity. The incinerator's owners, arrested and jailed for charges of tax evasion, neglected the maintenance of the facility. The pollution had become so much of a health problem for residents that if they showed signs of adverse health effects, the base allowed them to leave early (usually servicemembers are stationed at the base for a tour of three years). Many servicemembers reported sickness and a few died from cancer shortly after moving back to the United States.[10] For a time, the base required servicemembers to undergo medical screenings before being stationed at the base in order to ensure that their bodies could handle the poor air quality. In spite of this, servicemembers still developed health problems, such as acute cases of asthma.

In May 2001 the Japanese government purchased the plant for nearly 40 million dollars and shut it down. Dismantling was completed by the end of that year.

Atsugi currently hosts Carrier Air Wing 5, part of aircraft carrier USS George Washington's air component. The wing includes about 70 aircraft and 2,000 military personnel who are stationed at Atsugi when the carrier is in port at Yokosuka. On 9 May 2008 the wing commander, Captain Michael P. McNellis, was relieved of command by Rear Admiral Richard B. Wren, commander of Commander Task Force 70, after the admiral said he lost confidence in McNellis' ability to command. McNellis was replaced by Captain Michael S. White.[11]

On 30 November 2010, the F/A-18C of VFA-195 had left NAF Atsugi, the squadron will start transition to Super Hornet. Carrier Air Wing Five will be the first wing totally equipped with Super Hornets without legacy Hornets.

In February 2012 the Gauntlets of VAQ-136 left Atsugi and relocated NAS Whidbey Island to transition to the EA-18G Growler. The Shadowhawks of VAQ-141, who previously deployed with Carrier Air Wing 8 in 2011 will redeploy to Atsugi with the EA-18G Growler to take the place of the Gauntlets. No word has been mentioned yet if the transfer will be permanent, or if the Gauntlets will return after switching to the Growler.

In September 2012, The U.S. Navy announced that HSM-77 Saberhawks and HSC-12 Golden Falcons will change their permanent duty stations from Naval Air Station (NAS) North Island, Calif., and become part of the FDNF at Naval Air Facility (NAF) Atsugi; HS-14 Chargers will change its permanent duty station from NAF Atsugi to NAS North Island; and HSL-51 Warlords will transition aircraft to a new airframe and remain in place at NAF Atsugi and be renamed HSM-51. The squadron changes of duty stations and aircraft transition began on 17 Sept. 2012 and is expected to be complete by December 2013.[12]