From Infogalactic: the planetary knowledge core
Jump to: navigation, search
Not to be confused with Squelch. For other uses, see Attenuator (disambiguation). 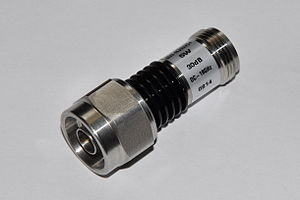 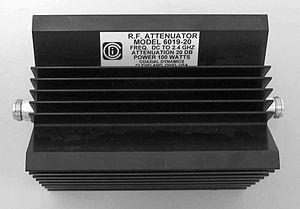 An attenuator is an electronic device that reduces the power of a signal without appreciably distorting its waveform.

Fixed attenuators in circuits are used to lower voltage, dissipate power, and to improve impedance matching. In measuring signals, attenuator pads or adapters are used to lower the amplitude of the signal a known amount to enable measurements, or to protect the measuring device from signal levels that might damage it. Attenuators are also used to 'match' impedance by lowering apparent SWR. 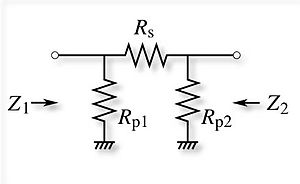 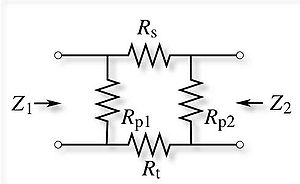 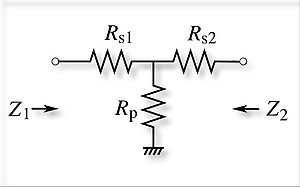 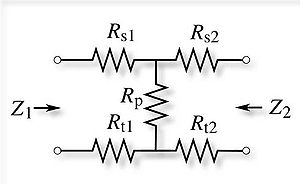 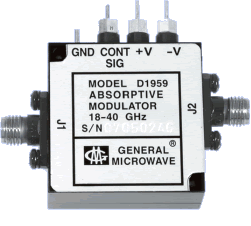 Key specifications for attenuators are:[1]

The size and shape of the attenuator depends on its ability to dissipate power. RF attenuators are used as loads for and as known attenuation and protective dissipation of power in measuring RF signals.[2]

A line-level attenuator in the preamp or a power attenuator after the power amplifier uses electrical resistance to reduce the amplitude of the signal that reaches the speaker, reducing the volume of the output. A line-level attenuator has lower power handling, such as a 1/2-watt potentiometer or voltage divider and controls preamp level signals, whereas a power attenuator has higher power handling capability, such as 10 watts or more, and is used between the power amplifier and the speaker.

This section concerns pi-pads, T-pads and L-pads made entirely from resistors and terminated on each port with a purely real resistance.

This circuit is used for the general case, all T-pads, all pi-pads and L-pads when the source impedance is greater than or equal to the load impedance.

The attenuator two-port is generally bidirectional. However, in this section it will be treated as though it were one way. In general, either of the two figures above applies, but the figure on the left (which depicts the source on the left) will be tacitly assumed most of the time. In the case of the L-pad, the right figure will be used if the load impedance is greater than the source impedance.

Each resistor in each type of pad discussed is given a unique designation to decrease confusion.

Passive, resistive pads and attenuators are bidirectional two-ports, but in this section they will be treated as unidirectional.

If a source and load are both resistive (i.e. Z1 and Z2 have zero or very small imaginary part) then a resistive L-pad can be used to match them to each other. As shown, either side of the L-pad can be the source or load, but the Z1 side must be the side with the higher impedance.

This is the Y-Δ transform

This is the Δ-Y transform

Conversion between two-ports and pads

The impedance parameters for a passive two-port are

It is always possible to represent a resistive t-pad as a two-port. The representation is particularly simple using impedance parameters as follows:

The preceding equations are trivially invertible, but if the loss is not enough, some of the t-pad components will have negative resistances.

The admittance parameters for a passive two port are

It is always possible to represent a resistive pi pad as a two-port. The representation is particularly simple using admittance parameters as follows:

The preceding equations are trivially invertible, but if the loss is not enough, some of the pi-pad components will have negative resistances.

Because the pad is entirely made from resistors, it must have a certain minimum loss to match source and load if they are not equal.

The minimum loss is given by

Although a passive matching two-port can have less loss, if it does it will not be convertible to a resistive attenuator pad.

Once these parameters have been determined, they can be implemented as a T or pi pad as discussed above.