Atum (/ɑ.tum/),[citation needed] sometimes rendered as Atem or Tem, is an important deity in Egyptian mythology.

Atum's name is thought to be derived from the word tem which means to complete or finish. Thus he has been interpreted as being the 'complete one' and also the finisher of the world, which he returns to watery chaos at the end of the creative cycle. As creator he was seen as the underlying substance of the world, the deities and all things being made of his flesh or alternatively being his ka.[2]

Atum is one of the most important and frequently mentioned deities from earliest times, as evidenced by his prominence in the Pyramid Texts, where he is portrayed as both a creator and father to the king.[2]

In the Old Kingdom the Egyptians believed that Atum lifted the dead king's soul from his pyramid to the starry heavens.[7] He was also a solar deity, associated with the primary sun god Ra. Atum was linked specifically with the evening sun, while Ra or the closely linked god Khepri were connected with the sun at morning and midday.[8]

In the Book of the Dead, which was still current in the Graeco-Roman period, the sun god Atum is said to have ascended from chaos-waters with the appearance of a snake, the animal renewing itself every morning.[9][10][11]

Atum is the god of pre-existence and post-existence. In the binary solar cycle, the serpentine Atum is contrasted with the ram-headed scarab Khepri—the young sun god, whose name is derived from the Egyptian hpr "to come into existence". Khepri-Atum encompassed sunrise and sunset, thus reflecting the entire solar cycle.[12]

Relationship to other gods

Atum was a self-created deity, the first being to emerge from the darkness and endless watery abyss that existed before creation. A product of the energy and matter contained in this chaos, he created his children—the first deities, out of loneliness. He produced from his own sneeze, or in some accounts, semen, Shu, the god of air, and Tefnut, the goddess of moisture. The brother and sister, curious about the primeval waters that surrounded them, went to explore the waters and disappeared into the darkness. Unable to bear his loss, Atum sent a fiery messenger, the Eye of Ra, to find his children. The tears of joy he shed on their return were the first human beings.[13]

He is usually depicted as a man wearing either the royal head-cloth or the dual white and red crown of Upper Egypt and Lower Egypt, reinforcing his connection with kingship. Sometimes he also is shown as a serpent, the form he returns to at the end of the creative cycle, and also occasionally as a mongoose, lion, bull, lizard, or ape.[2]

Atum's cult centered on the city of Heliopolis (Egyptian: Annu).[2] The only surviving remnant of Heliopolis is the Temple of Re-Atum obelisk located in Al-Masalla of Al-Matariyyah, Cairo. It was erected by Senusret I of the Twelfth dynasty, and still stands in its original position.[14] The 68 ft (20.73 m) high red granite obelisk weighs 120 tons (240,000 lbs). 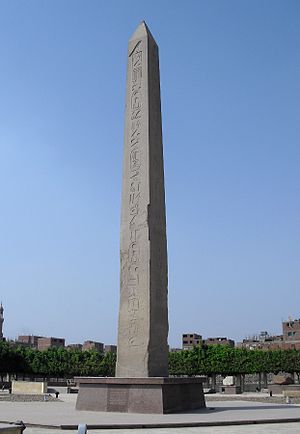 The Al-Masalla obelisk, the largest surviving monument from Heliopolis