The Au Sable River International Canoe Marathon is an annual 120 mi (193 km) canoe race in Michigan from Grayling to Oscoda. It first ran in 1947, is perhaps the oldest marathon canoe race in the United States, and is the longest, non-stop, canoe-only race in North America. The race has been billed as "The World's Toughest Spectator Race" as many of the spectators follow the racers overnight down the full 120 miles (190 km) to the finish.[1] 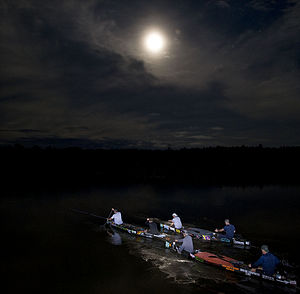 The race is always held the last full weekend in July during Grayling's annual Au Sable River Festival. To determine the order of the racers the night of the canoe marathon there is a sprint held to determine which of the teams is fastest or slowest. The sprint trials are held at Penrod's canoe livery. The trials are held the Wednesday, Thursday, and Friday before the race on Saturday. Each team will head downstream one quarter mile towards the east branch of the river. Once there you must complete a counter clockwise turn around a buoy. Then you must head back upstream to the starting point and the next team does not start until the team finishing reaches a point close to the start buoy. On average this can take from 2 minutes and 15 seconds to 5 minutes. The overall finish times range from about 5 minutes and 30 seconds to 13 minutes. While they are on their way back to the starting buoy they must maintain the amount of buoys on the left side of their canoe. Once all of the teams have finished the sprint trials they will be lined up in groups of five, from fastest to slowest, on the night of the marathon to make the four-block foot race.

The Marathon starts at 9pm in Grayling in a LeMans-style start where the competitors carry their canoes in a footrace four blocks through town to the Au Sable River entry point. Upon reaching the Au Sable River, they begin paddling non-stop throughout the night. In addition to paddling for 14–19 hours non-stop overnight, competitors must also make portages over six dams along the river race route.

The race relies on the efforts made by many volunteers.

The Triple Crown of Canoe Racing

This is the finish of the 2005 AuSable River Canoe Marathon - the closest finish in the history of The Marathon. After nearly 15 hours, more than 50,000 paddle strokes and racing overnight 120 miles on the AuSable River from Grayling to Oscoda, Michigan -- Serge Corbin & Jeff Kolka edged Andy Triebold & Matt Rimer in a sprint to the Finish Line by 1 second, finishing in 14:56:11 (14 hours, 56 minutes, 11 seconds).

The race record for the current course is 13:58:08 set by Serge Corbin of Quebec and Solomon Carriere of Saskatchewan.