From Infogalactic: the planetary knowledge core
Jump to: navigation, search
For other uses, see Aube (disambiguation).

Aube (French pronunciation: ​[ob]) is a French department in the Alsace-Champagne-Ardenne-Lorraine region of north-eastern France. As with sixty departments in France, this department is named after a river: the Aube. With 305,606 inhabitants (2012), Aube is 76th department in terms of population. The inhabitants of the department are known as Aubois or Auboises[1]

The department was constituted as it is today by a decree of the National Assembly of 15 January 1790. 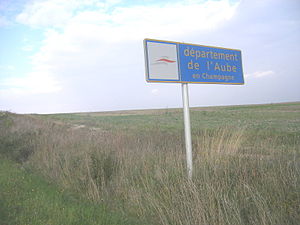 Entry to the Aube department from Route N77 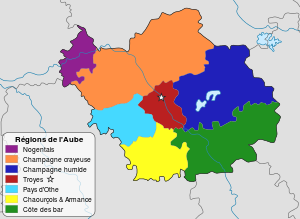 Map of natural and traditional regions of the department.

Within the department regions of natural or traditional countryside can be identified as follows:

Aube is divided into 433 communes totalling 308,503 inhabitants. Major cities with more than 10,000 inhabitants) are:

They are mostly located in the centre of the department. Four of those five cities are part of the Agglomeration of Troyes. 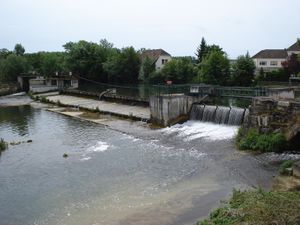 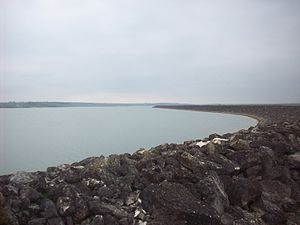 Temple Lake seen from the dam

Located in the Community of communes of Forests, lakes, and lands in Champagne, the Orient Forest Regional Natural Park was one of the first natural parks created in France.

In the same place, there is the Orient Lake and the Amance and Temple lakes where fishing, recreational water sports, and bathing are available. Each lake specialises in one or more of these activities.

The climate is moderate without intense cold or excessive heat which represents a climate similar to continental and oceanic.

Between 1950 and 1985 the average annual temperature recorded in the department was 10.1 °C[5] which is equivalent to the Paris basin and the cities of north-eastern France. The average sunshine hours per year is 1771.

Average annual rainfall is quite high (653.4 mm over 115 days of rain[5]). In general there is more rain in autumn than in winter but rainfall is highest during spring. In contrast summer is the season when rainfall is lowest. There is, however, more rain in the south-east than the north-west.

Snow is relatively infrequent. Prevailing wind is from the west.

Channels of communication and transport

In the Agglomeration of Troyes TCAT (Transport for the Communes of Troyes) provides a transport network between communes. Unlike many networks that are provided by other operators, the agglomeration community of the city is the owner of the company.[9] The network currently serves eleven communes including two outside the Troyes agglomeration. Other cities, including Romilly-sur-Seine, have no transport network.[10]

Aube also has intercity transport networks. 21 regular bus routes are operated between the major cities of the department. The use of these lines is entrusted to private coaches: Transdev - The Carriers of Aube has 15 routes,[11] Keolis Sud Lorraine has 4 routes,[12] Procars Champagne has 2 routes,[13] Autocars Bardy has one route.[14] 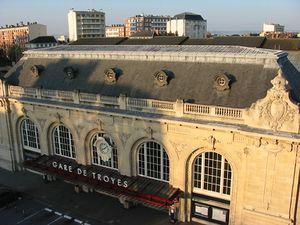 Aube does not have a strong rail coverage. Only one main non-electrified line passes through Aube - the line that connects Paris-Est to Mulhouse.

The department has 34.8 km of navigable waterways.[8] The city of Nogent-sur-Seine has two river ports for grain.[15]

The first inhabitants of Aube were the Tricasses and Lingones with a substantial human settlement around the year 400 BC.

Saints Potentian and Savinian,[16] Greek priests from Samos, came to preach the gospel from the middle of the 3rd century. Saint Patroclus was one of the first martyrs of the new faith in the year 259. Shortly after Saint Jule and some notables of the city of Tricasses also suffered martyrdom. Nevertheless, as elsewhere, the Christian community became large enough to accommodate a bishop. Saint Amateur was the first in 340. In the year 286 the Bagaudae ravaged the land which forms Aube. Emperor Julian came to Troyes with his army and rescued it.

The territory making up Aube was first attached to France in 843, following the Treaty of Verdun.

The 12th century and the monasteries 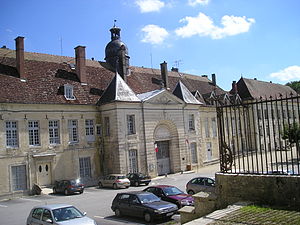 The Abbey of Clairvaux: today a prison

Two important monasteries were founded in the department: one at Clairvaux in 1114, created by Bernard of Clairvaux, the other at Paraclete, by his illustrious rival, Pierre Abélard and of which Héloïse d'Argenteuil was the first abbess. Bernard of Clairvaux was noted for his eloquence at the Council of Troyes and his preaching of the Second Crusade which had no result and whose outcome was disastrous.

The reunion of Champagne with the kingdom of France was finalised in 1361. Yet people wanted absolutely the incorporation of Champagne but in 1328 King Philip VI gave the city of Bar-sur-Seine to Philippe de Croy. The inhabitants, however, ransomed him to return it to the king on the condition that it become inalienable.

Definitive reunion with Kingdom of France

The decree of the National Assembly of 15 January 1790 formally established the department of Aube. Its first president was Augustin-Henri-Marie Picot[17] and his first deputy was Louis Antoine Joseph Robin. Jacques Claude Beugnot was elected Attorney-General and also MP.[17]

The 19th century marked the emergence of the Hosiery business in the department.

After the victory of the allies in the Battle of Waterloo on 18 June 1815, the department was occupied by Russian troops from June 1815 to November 1818.

In 1911 following the revolt of the vineyards of Champagne large Riots broke out in the department. The consequences of this were tragic because the clashes resulted in dozens of injuries.

In 1919, a decree allowed Aube department to produce champagne for the first time.[18]

In 1932 Turkish president Mustafa Kemal Atatürk visited Aube and signed a friendship treaty with France there on 4 July 1938.[19]

The General Council of Aube is located in Troyes. Its president has been DVD Senator Philippe Adnot since July 1990. It includes the 34 councillors of the 17 cantons of Aube. Of these, 32 are from the Right (mainly the UMP), the others are from the Miscellaneous left.[20] Currently the budget of the General Council is €329.8 million. Its main mission and expenditure on social activities and health.[8]

Aube returns three Deputies to the National Assembly, all of whom are from the Union for a Popular Movement (UMP), and two Senators: one UMP and one right-wing independent.

Distribution of the population

Population of the Main towns of Aube[21]

Sources : Historical data of Aube department on the SPLAF website Ldh/EHESS/Cassini until 1962, INSEE database from 1968 (population without double counting and municipal population from 2006) 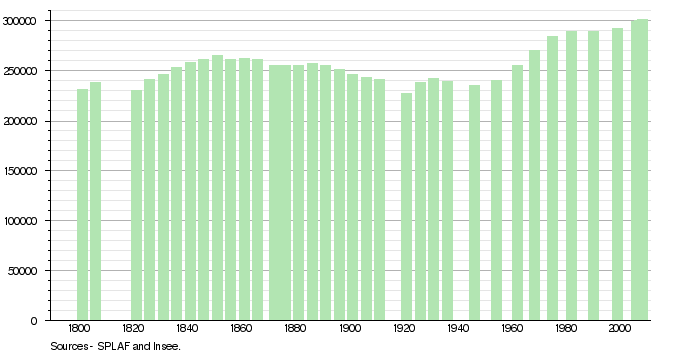 Breakdown of population by socio-professional categories

The economy of Aube has focused on the textile industry since the 19th century. This sector is now in crisis due to the department being in an area of real economic change.

The Aube department has a high rate of feminization in employment. Nearly half of people with active jobs (46% in 2007) are women. The main areas affected by the feminization are trade, transport, textiles, utilities, education, and health. Women are slightly more affected than men by unemployment (54.8% of the unemployed in 2007). This is mainly due to layoffs in the textile sector.

Distribution of Employment by Industry sector 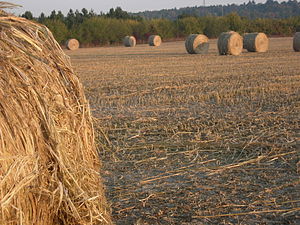 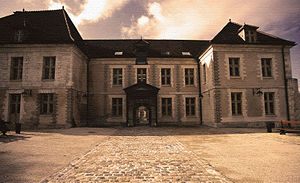 An old school at Troyes

In 2010 elementary and secondary education consisted of:

According to the latest census of the academic inspectorate of Aube in 2009 the department has 8,794 students in higher education.[8][Note 4]

The Aube Stadium is the residence of the ES Troyes AC football club.

There are 580 clubs and sports associations in the Aube department.[25] The main ones are:

At Troyes there are three independent local radio stations:

At Romilly-sur-Seine, in addition to Latitude Radio, there is a local independent radio broadcaster: Radio Aube et Seine.

French Christian Radio (RCF) Aube is located in the department.

All Aube jurisdictions are located in Troyes. The city has a Tribunal d'instance and a High Court, a commercial court and an Employment Tribunal for civil and criminal jurisdictions. There is also a Correctional court and a Juvenile court.

Appeals, however, are passed to the Court of Appeal in Reims.[27]

The four main theatres are: 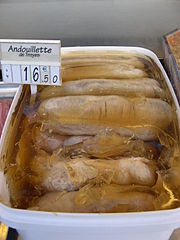 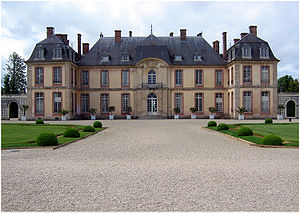 The castle of La Motte-Tilly 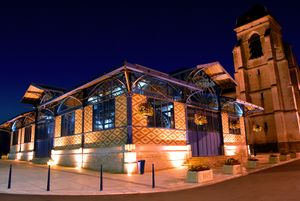 Hall in the style of Baltard d'Aix en Othe 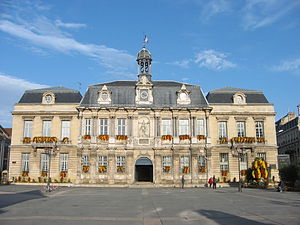 The Hôtel de Ville in Troyes

Notable People linked to the Department