From Infogalactic: the planetary knowledge core
Jump to: navigation, search
This article is about the auberge in Valletta. For the one in Birgu, see Auberge d'Italie, Birgu.

The Auberge d'Italie (Maltese: Berġa tal-Italja) is an auberge in Valletta, Malta. It was built in the 16th century to house knights of the Order of Saint John from the langue of Italy. The building was extensively modified in the Baroque style in the 1680s during the magistracy of Gregorio Carafa.

After the Order was expelled from Malta in 1798, the auberge was used for a number of purposes, housing a military headquarters, an officers' mess, a museum, a school of arts, a courthouse, the General Post Office and various government departments. It currently houses the Ministry of Tourism and the Malta Tourism Authority, but there are plans to move the National Museum of Fine Arts into the building.

Auberge d'Italie was the third Italian auberge to be built in Malta. The first auberge was built in Birgu in the 1550s, on the site of an earlier building which had been used by the Langue of Italy. Following the transfer of the capital city from Birgu to Valletta, a second auberge was built in the centre of the new city in 1570–71. This building was eventually incorporated into the Grandmaster's Palace, and the present auberge began to be built in Strada San Giacomo (now Merchants Street). The original designs of both Valletta auberges were made by the Maltese architect Girolamo Cassar.[1]

The Langue of Italy also built a Church of St. Catherine adjacent to the auberge. Construction of the church began in 1576, and it was enlarged and modified in 1683 and 1710.[3] 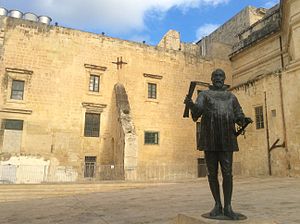 Side façade of Auberge d'Italie in Jean de Valette Square, which might have contained the main entrance prior to 1629

Some repair works were made in 1604 by Alessandro Stafrace, after cracks appeared in part of the Main Hall. The auberge had an entrance facing a square in South Street, but this was blocked in 1629 when the square was built up (the square was recreated in 2012 as Jean de Valette Square). Historian Giovanni Bonello suggests that this was the main entrance of the auberge, although it might have just been a side entrance.[2] In 1649–50, a mezzanine was built beneath the Admiral's Room, and a large room at the rear of the building was converted into four shops in 1654. The archives were constructed in 1678.[1]

A major renovation of the auberge in the Baroque style began in 1680. The façade was remodelled by Mederico Blondel, and a third floor was constructed at the expense of Grand Master Gregorio Carafa. An ornate centrepiece with a trophy of arms containing a bust of Carafa was added above the main entrance. The trophy was sculpted by La Fe’ out of marble taken from the ruins of the Temple of Proserpina, an ancient Roman temple in Mtarfa which had been discovered in 1613.[1]

The Order of St. John was expelled from Malta with the French invasion and occupation in 1798. Being located opposite Napoleon's residence at Palazzo Parisio, the auberge was converted into the French military command. After Malta fell under British rule in 1800, it was used by both the military and civil administrations. Until the 1920s, it served as a Corps Headquarters and an officers' mess. In the early 19th century, chemist John Davy, who was in Malta with the Army Medical Staff, established a public dispensary at the auberge for the treatment of the poor. The successor of this service, the Government Polyclinics, is still referred to as il-Berġa (the auberge), a legacy of the impact on the Maltese people.[1]

In the 1920s, Auberge d'Italie became a museum curated by Sir Themistocles Zammit. It was severely damaged by aerial bombardment in World War II, but the damaged parts were subsequently reconstructed. In the 1950s, it was used by the Department of Museums and as a school of art. It then became a temporary courthouse, after the courts had to vacate the war-damaged Auberge d'Auvergne due to its dilapidated state.[1] 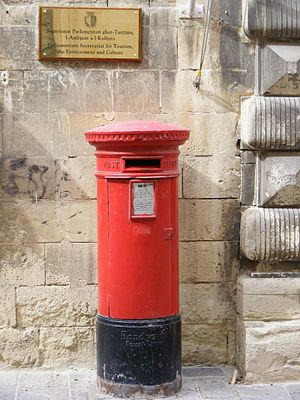 In March 1971, the Superior Courts of Justice vacated Auberge d'Italie after moving into a new courthouse was built on the site of Auberge d'Auvergne. The building was to be converted into an examination hall, but in August of that year, it was assigned to the Posts & Telephones Department. After extensive renovations, the auberge opened as the General Post Office on 4 July 1973, taking over the role from Palazzo Parisio. The auberge remained the GPO until Posta Limited opened a new complex at Marsa in October 1997.[4] The auberge was also used by the Water and Electricity Department, the Agricultural Department and the Central Office of Statistics.[1]

As of May 2016, the auberge's façade is undergoing restoration. There are plans to move the National Museum of Fine Arts into the building.[5]

The building was included on the Antiquities List of 1925 together with the other auberges in Valletta.[6] It is now scheduled as a Grade 1 national monument by the Malta Environment and Planning Authority, and it is also listed on the National Inventory of the Cultural Property of the Maltese Islands.[7] 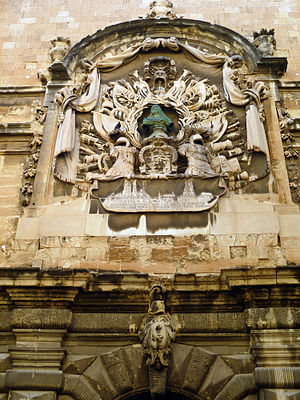 Ornate centrepiece of the façade

Auberge d'Italie was originally built in the Mannerist style, but the building acquired a mainly Baroque character due to the 1680s renovation. The building has a rectangular plan with its rooms are built around a central courtyard, a layout typical of Italian Renaissance palazzi and Cassar's other auberges in Valletta such as Auberge d'Aragon.[2] A triumphal arch is located within the courtyard.[7]

It has a symmetrical façade with an ornate Baroque centrepiece above the main entrance, containing a marble trophy-of-arms and inscription, together with a bronze bust of Carafa. The main entrance and the corners of the building are rusticated. Each of the three floors contains a set of six windows, and a cornice runs along the façade between the first and second floors.[7]