From Infogalactic: the planetary knowledge core
Jump to: navigation, search
This article is about the Auberge in Valletta which now houses the Office of the Prime Minister of Malta. For the Auberge in Birgu, see Auberge de Castille et Portugal.

Auberge de Castille (Maltese: Berġa ta' Kastilja) is one of the seven original auberges built in Valletta, Malta for the langues of the Order of Saint John. The Auberge originally housed the langue of Castile, León and Portugal. The building is currently the office of the Prime Minister of Malta.

The building is located in Castille Square, close to Saint James Cavalier, the Malta Stock Exchange and the Upper Barrakka Gardens. The Auberge is situated at the highest point of Valletta and overlooks Floriana and the harbour area.

Auberge de Castille was originally built between 1571 and 1574 to house the Langue of Castile, León and Portugal, one of the most powerful langues of the Order. The building was designed by the Maltese architect Girolamo Cassar, and it was regarded as the most innovative of his Auberge designs.

The Auberge was completely rebuilt from 1741 to 1745, during the grandmastership of Manuel Pinto da Fonseca to a Baroque design by another Maltese architect, Andrea Belli. The coats of arms of Castile and León and of Portugal, along with Pinto's personal coat of arms were sculpted on the facade of the building at this point. A bust of Pinto was also added.[1]

When the French occupation of Malta began, the knights were expelled from the Maltese islands. The Spanish knights moved out of Auberge de Castille with their movable property on 20 June 1798. Later that year, the Auberge was used as the Commission for National Property.

View of the Grand Harbour in World War I, with the signalling station on Auberge de Castille visible to the left. 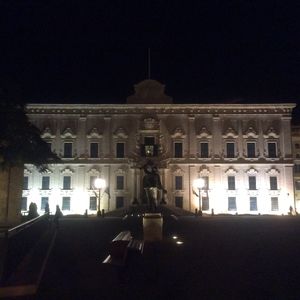 Castile at night after restoration and redesign of piazza in 2015

The Auberge then became the headquarters for the British armed forces in Malta in 1805. In 1814, a disabled contingent from the army of Egypt was accommodated in the Auberge. A Protestant chapel was opened in one of the rooms of the first floor in 1840. In 1889 a signalling station with a large aerial was installed on the roof to communicate with warships of the Mediterranean Fleet moored in the Grand Harbour. In World War II, the Auberge was bombed and sustained severe damage on the right side of the entrance. After the war, the damaged section was rebuilt and the aerial was removed.[2]

Over the years, some of the stonework began to crumble and the facades were blackened. Restoration of the Auberge started in 2009 and was completed in mid-2014.[3]

The auberge is listed on the National Inventory of the Cultural Property of the Maltese Islands.[4]

Auberge de Castille was depicted on two commemorative coins minted in 2008 by the Central Bank of Malta. The coins show the Auberge's portico on the reverse and the coat of arms of Malta on the obverse.[5]