From Infogalactic: the planetary knowledge core
Jump to: navigation, search
This article is about the Auberge in Valletta. For the one in Birgu, see Auberge d'Auvergne et Provence.

Auberge de Provence (Maltese: Berġa ta' Provenza) is an auberge in Valletta, Malta. It was built in the sixteenth century to house knights of the Order of Saint John from the langue of Provence. It now houses the National Museum of Archaeology. 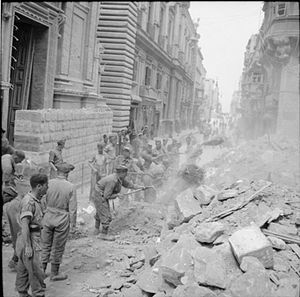 Auberge de Provence surrounded by rubble from bombed buildings, 11 May 1942. 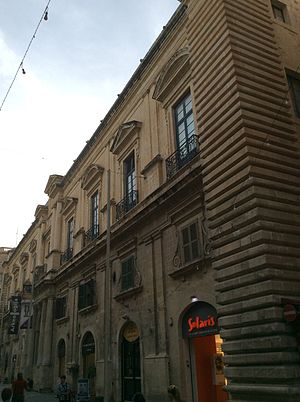 Auberge de Provence was first built in 1571 or 1574–75 to a design by Girolamo Cassar.[1] Prior to its construction, the Langue of Provence had been housed in the Auberge d'Auvergne et Provence in Birgu.

The building was extensively renovated in the 17th century. Its façade was redesigned in 1638 by the architect Mederico Blondel, and a new wing was built instead of a small square.[1]

In 1798, the Order lost Malta to the French, and the auberge was vacated. After the islands fell under British rule in 1800, it was used for a variety of purposes, including a hotel and a military barracks.[2] In 1826, the upper part of the auberge was leased to the Malta Union Club, and the lease was set to expire in 2002. The lease extended to the entire building in 1903.[3]

The building was included on the Antiquities List of 1925 together with the other auberges in Valletta.[4] In World War II, buildings located close to the auberge were destroyed by aerial bombardment, but the auberge itself was not hit. Since Auberge d'Auvergne and Auberge de France were both destroyed during the war, Auberge de Provence is the only surviving French auberge in Valletta.

The auberge is listed on the National Inventory of the Cultural Property of the Maltese Islands.[7] 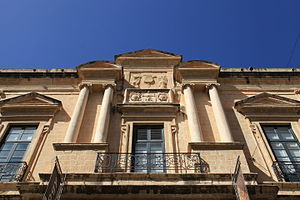 Top floor of the auberge's façade

Auberge de Provence was originally built with Mannerist characteristics typical of its architect Girolamo Cassar. However, very little of Cassar's original design has survived, due to the extensive renovation in the mid-17th century.

The auberge's interior consists of rooms roofed by diaphragm arches with wooden beamed ceilings and gilded panelling. The most ornate room is the Grand Salon on the first floor, which was used for business discussions, and as a refectory and banqueting hall, where knights sat at long tables according to seniority.

Auberge de Provence was depicted on two commemorative coins minted in 2013 by the Central Bank of Malta. The coins show the auberge's façade on the reverse and the coat of arms of Malta on the obverse.[2][8]