Aubrey Harold Brain was born in London in 1893. He came from a musical family. His father, A. E. Brain sr. was a member of the London Symphony Orchestra (LSO) horn quartet. His brother Alfred was for many years principal horn player in the Queen's Hall Orchestra under Sir Henry J. Wood. He went to the United States to join the Damrosch Orchestra in 1923, and remained permanently, becoming an American citizen.

In 1911 Aubrey Brain won a scholarship to the Royal College of Music. He was appointed principal horn of the New Symphony Orchestra that same year, and in 1912 he went on the LSO's tour of the United States under Arthur Nikisch. He was principal horn of Sir Thomas Beecham's opera company orchestra in 1913.

In 1923 he succeeded his teacher Borsdorf as professor of horn at the Royal Academy of Music, where his son Dennis was among his students. 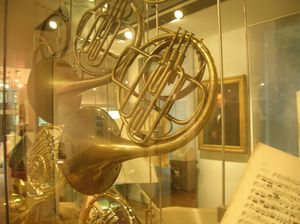 Aubrey Brain's Raoux piston-valve horn on display at the Royal Academy of Music.

Dame Ethel Smyth wrote her Concerto for Violin, Horn and Orchestra with Aubrey Brain in mind. He and Jelly d'Arányi premiered the work under Sir Henry Wood on 5 March 1927. He also played it in Berlin with Marjorie Hayward. He joined the BBC Symphony Orchestra as principal horn, and remained there until illness caused his premature retirement in 1943. He was often a soloist, and made a number of recordings

He had a marked preference for French instruments, and played a hand horn made by Labbaye in c. 1865, to which English-made valves had been added. He would never permit the use of large-bore German horns in the BBC Symphony.

He married Marion Beeley, a singer at Covent Garden. His two sons were Dennis Brain, even more famous as a horn player, and Leonard Brain, an oboist.

One recording by Aubrey Brain has been made available by the British classical record company Testament: