Auburn is a city in Cayuga County, New York, United States, located at the north end of Owasco Lake, one of the Finger Lakes, in Central New York. As of the 2010 census, the city had a population of 27,687.[1] It is the county seat of Cayuga County,[2] and the site of the maximum-security Auburn Correctional Facility, as well as the William H. Seward House Museum and the house of abolitionist Harriet Tubman. 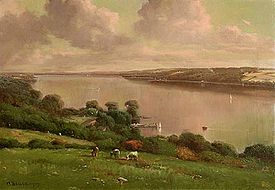 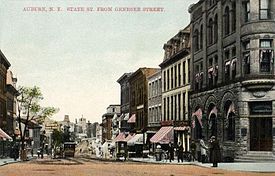 The region around Auburn had been Haudenosaunee territory for centuries before European contact and historical records.

Auburn was founded in 1793, during the post-Revolutionary period of settlement of western New York. The founder, John L. Hardenbergh, was a veteran of the Sullivan-Clinton campaign against the Iroquois during the American Revolution. Hardenbergh settled in the vicinity of the Owasco River with his infant daughter and two African-American slaves, Harry and Kate Freeman. After his death in 1806, Hardenbergh was buried in Auburn's North Street Cemetery, and was re-interred in 1852 in Fort Hill Cemetery – the first burial in the city's newly opened burial ground. The community grew up around Hardenbergh's gristmill and sawmill.[3]

Originally known as Hardenbergh's Corners in the town of Aurelius, the settlement was renamed Auburn in 1805 when it became the county seat.[4] It became an incorporated village in 1815, and was chartered as a city in 1848. It was only a few miles from the Erie Canal, which opened in 1825 and allowed local factories to inexpensively ship goods north or south. In 1871, the Southern Central Railroad, financed by the Lehigh Valley Railroad, completed a line primarily to carry coal from Athens, Pennsylvania, through Auburn to wharves on Lake Ontario at Fair Haven.[5]

From 1818 to 1939, Auburn was home to Auburn Theological Seminary, once one of the preeminent theological seminaries in the United States. In 1939, facing financial difficulties as a result of the Great Depression, the seminary moved to the campus of Union Theological Seminary in New York City. The only building from the Auburn Theological Seminary that stands today is Willard Memorial Chapel and the adjacent Welch Memorial Hall on Nelson Street, designed by Andrew Jackson Warner of Rochester, with stained-glass windows and interior decoration by Louis Comfort Tiffany. It is the only complete and unaltered Tiffany chapel interior known to exist.

In 1816, Auburn Prison (now the Auburn Correctional Facility) was founded as a model for the contemporary ideas about treating prisoners, known now as the Auburn system. Visitors were charged a fee for viewing the facility and its inmates. On August 6, 1890, the first execution by the electric chair was carried out at Auburn Prison. In 1901 Leon Czolgosz, assassin of President William McKinley, was executed there. Although the ideas of the Auburn System have been abandoned, the prison continues to serve as a maximum security facility, and is one of the most secure prisons in the continental United States.

Auburn is located at the north end of Owasco Lake, one of the Finger Lakes, which is drained by the Owasco Outlet – also known as the Owasco River – which runs north through the city on its way to the Seneca River. A dam, owned and operated by the city, controls the outflow of the lake, which is used for drinking water and recreation. The city is required to keep a sufficient amount of water in the river to deal with the effluent from its waste disposal treatment facility.[6]

This climatic region is typified by large seasonal temperature differences, with warm to hot (and often humid) summers and cold (sometimes severely cold) winters. According to the Köppen Climate Classification system, Auburn has a humid continental climate, abbreviated "Dfb" on climate maps.[8]

The Auburn Enlarged City School District is the public school system serving Auburn. It currently operates eight schools covering grades K–12. West Middle School was closed over the summer of 2011 to save funds, with the student population merged into East Middle School.

The only college in Auburn is Cayuga Community College, a two-year school. C.C.C., as it is known locally, is located on Franklin Street. The city had been the home of Auburn Theological Seminary, a Presbyterian institution established in 1818, which relocated to New York City in 1939.[14] 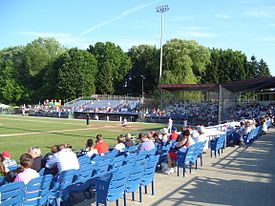 Auburn has had a long association with professional baseball:

In late 1901, Auburn became the headquarters of the National Association of Professional Baseball Leagues (NAPBL), which is now known simply as Minor League Baseball and based in St. Petersburg, Florida. John H. Farrell, who served as secretary-treasurer of the league for many years, was a local resident, and the league's offices remained in the city while he remained in that role.

Auburn Community Baseball, which is owned by the City of Auburn, is the parent organization of the Auburn Doubledays and its predecessor Auburn entries in the Class A short-season New York–Penn League dating back to 1958. The team plays its home games at Leo Pinckney Field at Falcon Park, and is an affiliate of the Washington Nationals.

Since 1978, on the second Sunday of every August, Auburn hosts "The Great Race", a three- or four-person relay race involving running, cycling, and canoeing (or kayaking). The race begins and ends in the area of Owasco Lake on the southern outskirts of Auburn. With between 2,000 and 2,500 people participating in an average year, it is one of the largest relay races in the United States.[15]

The daily newspaper published in Auburn is The Citizen, which dates back to 1816, and had previously been published as The Daily Advertiser and The Citizen-Advertiser. It serves Auburn and Cayuga County, as well as other parts of Central New York. A morning paper, published seven days a week, it has a circulation of 10,000 for the daily and Saturday editions, and 12,000 on Sunday. It is owned by Lee Enterprises. 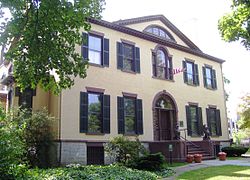 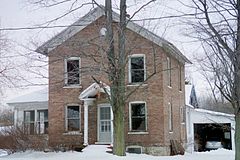 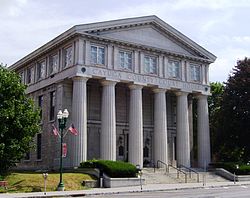 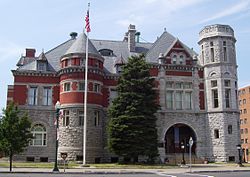 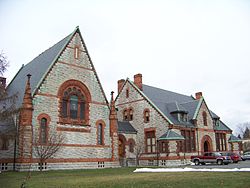 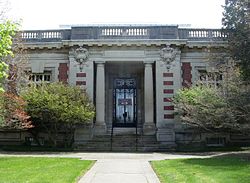 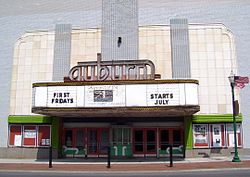 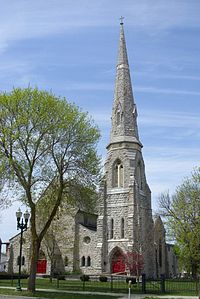 Seward – who served as a New York state senator, the governor of New York, a U.S. senator, a presidential candidate, and then Secretary of State under presidents Abraham Lincoln and Andrew Johnson, in which role he negotiated the 1867 purchase from Russia of Alaska, which became known as "Seward's Folly" – lived in Auburn from 1823 until his death in 1872, and was opposed to slavery. In 1859 he sold a plot of land to abolitionist Tubman, who used it to create a safe haven for her family and friends and other black Americans seeking a better life in the north.[16]

Seward's house is now a historical museum, and both it and Tubman's house are on the National Register of Historic Places.