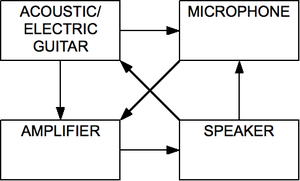 "Block diagram of the signal-flow for a common feedback loop."[1]

The conditions for feedback follow the Barkhausen stability criterion, namely that, with sufficiently high gain, a stable oscillation can (and usually will) occur in a feedback loop whose frequency is such that the phase delay is an integer multiple of 360 degrees and the gain at that frequency is equal to 1. If the small signal gain is greater than 1 for some frequency then the system will start to oscillate at that frequency because noise at that frequency will be amplified. Sound will be produced without anyone actually playing. The sound level will increase until the output starts clipping, reducing the loop gain to exactly unity. This is the principle upon which electronic oscillators are based; although in that case the feedback loop is purely electronic, the principle is the same. If the gain is large, but slightly less than 1, then high-pitched slowly decaying feedback tones will be created, but only with some input sound.

Early academic work on acoustical feedback was done by Dr. C. Paul Boner. Boner reasoned that when feedback happened, it did so at one precise frequency. He also reasoned that it could be stopped by inserting a very narrow notch filter at that frequency in the loudspeaker's signal chain.[2] He worked with Gifford White, founder of White Instruments to hand craft notch filters for specific feedback frequencies in specific rooms. Boner was responsible for establishing basic theories of acoustic feedback, room-ring modes, and room-sound system equalizing techniques.[3]

To maximize gain before feedback, the amount of sound energy that is fed back to the microphones has to be reduced as much as is practical. As sound pressure falls off with 1/r with respect to the distance r in free space, or up to a distance known as reverberation distance in closed spaces (and the energy density with 1/r²), it is important to keep the microphones at a large enough distance from the speaker systems.

Additionally, the loudspeakers and microphones should have non-uniform directivity and should stay out of the maximum sensitivity of each other, ideally at a direction of cancellation. Public address speakers often achieve directivity in the mid and treble region (and good efficiency) via horn systems. Sometimes the woofers have a cardioid characteristic.

Professional setups circumvent feedback by placing the main speakers a far distance from the band or artist, and then having several smaller speakers known as monitors pointing back at each band member, but in the opposite direction to that in which the microphones are pointing. This allows independent control of the sound pressure levels for the audience and the performers.

If monitors are oriented at 180 degrees to the microphones that are their sources, the microphones should have a cardioid pickup pattern. Super- or hypercardioid patterns are suitable if the monitor speakers are located at a different angle on the back side of the microphones, they also better cancel reverberations coming from elsewhere. Almost all microphones for sound reinforcement are directional.

Almost always, the natural frequency responses of sound reinforcement systems is not ideally flat. This leads to acoustical feedback at the frequency with the highest loop gain, which may be much higher than the average gain over all frequencies (resonance). It is therefore helpful to apply some form of equalization to reduce the gain of this frequency.

Feedback can be reduced manually by "ringing out" a sound system in advance of a performance. The sound engineer can increase the level of a microphone or guitar pickup until feedback occurs. The engineer can then attenuate the relevant frequency on an equalizer preventing feedback at that frequency but allowing sufficient volume at other frequencies. Many professional sound engineers can identify feedback frequencies by ear but others use a real time analyzer to identify the ringing frequency.

To avoid feedback, automatic anti-feedback devices can be used. (In the marketplace these go by the name "feedback destroyer" or "feedback eliminator".) Some of these work by shifting the frequency slightly, resulting in a "chirp"-sound instead of a howling sound due to the upshifting the frequency of the feedback. Other devices use sharp notch-filters to filter out offending frequencies. Adaptive algorithms are often used to automatically tune these notch filters.

According to AllMusic's Richie Unterberger, the very first use of feedback on a rock record is the introduction of the song "I Feel Fine" by the Beatles, recorded in 1964.[4] Jay Hodgson agrees that it was the first chart-topper to showcase feedback distortion, created by John Lennon leaning a semi-acoustic guitar against an amplifier.[5] The Who's 1965 hits "Anyway, Anyhow, Anywhere" and "My Generation" featured feedback manipulation by Pete Townshend, with an extended solo in the former and the shaking of his guitar in front of the amplifier to create a throbbing noise in the latter. Canned Heat's "Fried Hockey Boogie" (off of their 1968 album Boogie with Canned Heat) also featured guitar feedback produced by Henry Vestine during his solo to create a highly amplified distorted boogie style of feedback. In 1963, the teenage Brian May and his father custom-built his signature guitar Red Special, which was purposely designed to feed back.[6][7]

Feedback was used extensively after 1965 by the Monks,[8] Jefferson Airplane, the Velvet Underground and the Grateful Dead, who included in many of their live shows a segment named Feedback, a several-minutes long feedback-driven improvisation. Feedback has since become a striking characteristic of rock music, as electric guitar players such as Jeff Beck, Pete Townshend, Dave Davies, Steve Marriott and Jimi Hendrix deliberately induced feedback by holding their guitars close to the amplifier. Lou Reed created his 1975 album Metal Machine Music entirely from loops of feedback played at various speeds. A perfect example of feedback can be heard on Hendrix's performance of "Can You See Me?" at the Monterey Pop Festival. The entire guitar solo was created using amplifier feedback.[9]

Examples of feedback combined with a quick volume swell used as a transition include Weezer's "My Name Is Jonas" and "Say It Ain't So"; the Stroke's "Reptilia", "New York City Cops", and "Juicebox"; as well as numerous tracks by Meshuggah and Tool.[11]

Cacophonous feedback fade-outs ending a song are most often used to generate rather than relieve tension, often cross-faded too after a thematic and musical release. Examples include Modwheelmood's remix of Nine Inch Nail's "The Great Destroyer"; and the Jesus and Mary Chain's "Teenage Lust", "Tumbledown", "Catchfire", "Sundown", and "Frequency".[12]

Though closed circuit feedback was a prominent feature in many early experimental electronic music compositions, it was contemporary American composer Robert Ashley who first used acoustic feedback as sound material in his work The Wolfman (1964). Steve Reich makes extensive use of audio feedback in his work Pendulum Music (1968) by swinging a series of microphones back and forth in front of their corresponding amplifiers.

Pitched melodies may be created entirely from feedback through changing the angle between a guitar and amplifier after establishing a feedback loop. Examples include Tool's "Jambi", Robert Fripp's guitar on David Bowie's "Heroes" (album version), and Jimi Hendrix's "Third Stone From The Sun" and his live performance of "Wild Thing" at the Monterey Pop Festival.[13]

Regarding Fripp's work on "Heroes":

Fripp [stood] in the right place with his volume up at the right level and getting feedback...Fripp had a technique in those days where he measured the distance between the guitar and the speaker where each note would feed back. For instance, an 'A' would feed back maybe at about four feet from the speaker, whereas a 'G' would feed back maybe three and a half feet from it. He had a strip that they would place on the floor, and when he was playing the note 'F' sharp he would stand on the strip's 'F' sharp point and 'F' sharp would feed back better. He really worked this out to a fine science, and we were playing this at a terrific level in the studio, too.

Audio feedback became a signature feature of many underground rock bands during the 1980s. American noise-rockers Sonic Youth melded the rock-feedback tradition with a compositional/classical approach (notably covering Reich's "Pendulum Music"), and guitarist/producer Steve Albini's group Big Black also worked controlled feedback into the makeup of their songs. With the alternative rock movement of the 1990s, feedback again saw a surge in popular usage by suddenly mainstream acts like Nirvana, the Red Hot Chili Peppers, Rage Against the Machine and the Smashing Pumpkins.

The principle of feedback is used in many guitar sustain devices. Examples include handheld devices like the EBow, built-in guitar pickups that increase the instrument's sonic sustain, string drivers mounted on a stand such as the Guitar Resonator, and sonic transducers mounted on the head of a guitar. Intended closed-circuit feedback can also be created by an effects unit, such as a delay pedal or effect fed back into a mixing console. The feedback can be controlled by using the fader to determine a volume level.