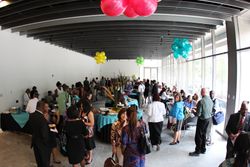 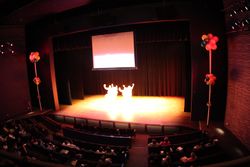 August Wilson Center for African American Culture is a U.S. nonprofit arts organization based in Pittsburgh, Pennsylvania that presents performing and visual arts programs that celebrate the contributions of African Americans in Western Pennsylvania.

The August Wilson Center for African American Culture building is on Liberty Avenue in Downtown Pittsburgh's Cultural District. It includes galleries, classrooms, a 500-seat theater, a gift shop, a cafe, and many multi-purpose spaces for visual and performing art. The museum opened in 2009.

The August Wilson Center was part of a plan drawn up by Pittsburgh NAACP President Tim Stevens in 1996 in order to try and bring the National NAACP Convention to Pittsburgh. In the plan, there was a statement that urged the Mayor of Pittsburgh to provide financial backing for an African American Museum. Later in 1996, then-Mayor Tom Murphy charged two City Council Members, Sala Udin and Valerie McDonald with bringing stakeholders together to discuss the museum's future. Funding from various sources, including the URA, State of Pennsylvania, and The Heinz Endowments came together to begin construction of the center. The land on which the center sits was taken by eminent domain and sold to the museum for $1. The center celebrated its "topping off" ceremony on August 12th, 2008 at 12:30 PM. Construction was completed shortly thereafter and the museum was open to the full public on September 17th and 19th of 2009. [1]

In February 2014 concerned stakeholders started a website to raise funds for the center.[4] After numerous court cases, the center was sold at a sheriff's sale on November 3rd 2014 to the mortgage holder, Dollar Bank.[5] On November 5, 2014 Dollar Bank sold the center to a nonprofit consortium for $7.9 million. The consortium includes: the Pittsburgh Foundation, the Heinz Endowments, and the Richard King Mellon Foundation. The consortium's mission is to preserve the center as a focal point for African American art and culture.[6]