Augusta–Richmond County US /ə.ˈɡʌs.tə/ is a consolidated city-county in the U.S. state of Georgia, located at the fall line of the Savannah River, at the head of its navigable portion.

The city was named after Princess Augusta of Saxe-Gotha (1719-1772), wife of Frederick, Prince of Wales. She was the mother of King George III of the United Kingdom.

According to 2012 US Census estimates, the Augusta-Richmond County population was 197,872, not counting the unconsolidated cities of Hephzibah and Blythe.

Augusta is the principal city of the Augusta-Richmond County Metropolitan Statistical Area, which as of 2012 had an estimated population of 580,270, making it the third-largest city and the second-largest metro area in the state after Atlanta. It is the 116th-largest city in the United States. Internationally, Augusta is best known for hosting The Masters golf tournament each spring.

The area along the river was long inhabited by varying cultures of indigenous peoples, who relied on the river for fish, water and transportation. The site of Augusta was used by Native Americans as a place to cross the Savannah River, because of its location on the fall line.

In 1735, two years after James Oglethorpe founded Savannah, he sent a detachment of troops to explore up the Savannah River. He gave them an order to build at the head of the navigable part of the river. The expedition was led by Noble Jones, who created the settlement to provide a first line of defense for coastal areas against potential Spanish or French invasion from the interior. Oglethorpe named the town Augusta, in honor of Princess Augusta, wife of Frederick, Prince of Wales and mother of the future King George III of the United Kingdom. Oglethorpe visited Augusta only once, which was in September, 1739. He did so while returning to Savannah from a perilous visit to Coweta Town where he had met with a convention of seven thousand Native American soldiers and obtained peaceful relations with several Native American groups in what is today the northern and western part of Georgia.[9] Augusta was the second state capital of Georgia from 1785 until 1795 (alternating for a period with Savannah, the first).

Augusta developed rapidly as a market town along with the development of the Black Belt in the Piedmont of Georgia; large cotton plantations for short-staple cotton were developed and generated great revenue from slave labor after the invention of the cotton gin made cultivation of short-staple cotton more profitable. Many of the slaves were brought from the Lowcountry, where their Gullah culture had developed on the large Sea Island cotton and rice plantations.

A riot in 1970 involving 500 people began when a mentally disabled teenager, Charles Oatman, was killed by his cellmates in an Augusta jail. Six black men were killed by police,[10] each shot in the back.[11] James Brown was called in to quell lingering tensions, was misquoted, but still succeeded where the mayor did not.[10] 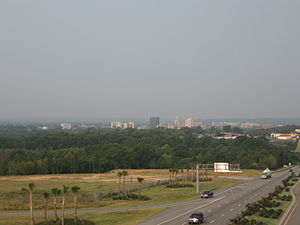 The Augusta skyline, as seen from North Augusta, South Carolina

Augusta is located about halfway up the Savannah River on the fall line, which creates a number of small falls on the river. The city marks the end of a navigable waterway for the river and the entry to the Georgia Piedmont area. 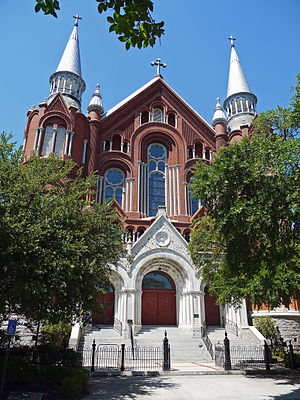 Augusta Downtown Historic District is a historic district that encompasses most of downtown Augusta and its pre-Civil War area. It was listed on the National Register of Historic Places in 2004.[15]

Augusta is a regional center of medicine, biotechnology, and military. Georgia Regents University, the state's only public health sciences graduate university, employs over 7,000 people. Along with University Hospital, the Medical District of Augusta employs over 25,000 people and has an economic impact of over $1.8 billion.[23] Within the next few years, the city is expected to have rapid population growth of 10,000+ residents due to the announcement of the United States Army Cyber Command that will be located in Fort Gordon.

According to the Augusta Economic Development Authority,[28] the top manufacturing employers in the city are:

The top public sector employers are:

Augusta also has its own all female flat track roller derby team, The Soul City Sirens. Founded in 2008, this league is all volunteer and skater owned. [31] 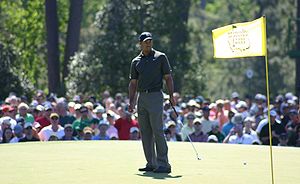 Tiger Woods at the practice rounds for the 2006 Masters Tournament

The city’s famous golf course, the Augusta National Golf Club, hosts the first major golf tournament of each year, The Masters. This tournament is one of the most prestigious in the sport[32] and is one of the four major championships. The best professional and amateur golfers in the world come to Augusta during the first full week of April every year. The grounds of Augusta National are known for being pristine, and the course was ranked in 2009 as the 3rd best golf course in the world by Golf Magazine.[33] Augusta is also home to Augusta Golf Instruction created by Master swing & mental coach B. J. Hathaway.

The city also has disc golf facilities. The Augusta Top Gun Series is a series of tournaments sanctioned by the Professional Disc Golf Association. These tournaments are held at various venues in Augusta, including Pendleton King Park and Lake Olmstead.[34] Also, Augusta hosted the 2006 Professional Disc Golf World Championships. Along with Pendleton King and Lake Olmstead, two courses in N. Augusta, SC were used for the tournament. 299 disc golfers from around the world attended the event, with Ken Climo winning the tournament and his 12th world championship.

Augusta is the host of the World's Richest Drag Boat Race, held on the Savannah River (Augusta Southern Nationals). The race is part of the IHBA Lucas Oil Drag Boat Racing Series and is sanctioned by the International Hot Boat Association (held on July 18–20). The event benefits the Augusta Chapter of the Georgia Special Olympics. Over 100 racing teams from 25 states will compete for $140,000 in purse and prizes as they try to beat the record of 252.94 MPH in the ‘World’s Richest Drag Boat Race". 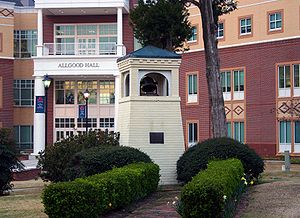 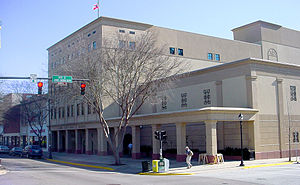 Augusta is linked to Atlanta to the west and Columbia, South Carolina, to the east by Interstate 20. Interstate 520 (Bobby Jones Expressway) runs from I-20 Exit 196 through Augusta's western and southern suburban areas, eventually crossing the Savannah River to South Carolina where it becomes the Palmetto Parkway.

Parts of Augusta are served by city transit service Augusta Public Transit (APT), but the main mode of transportation within the city is by car. The city has two airports: Augusta Regional Airport and Daniel Field. Augusta is also served by a number of taxi companies.

See also: List of twin towns and sister cities in the United States

Augusta is twinned with: