Augustus Henry Lane-Fox Pitt Rivers (14 April 1827 – 4 May 1900) was an English army officer, ethnologist, and archaeologist.[1] He was noted for innovations in archaeological methodology, and in the museum display of archaeological and ethnological collections. His international collection of about 22,000 objects was the founding collection of the Pitt Rivers Museum at the University of Oxford [2] while his collection of English archaeology from the area around Stonehenge forms the basis of the collection at The Salisbury Museum in Wiltshire.[3] Throughout most of his life he used the surname Lane Fox, under which his early archaeological reports are published. In 1880 he adopted the Pitt Rivers name on inheriting from Lord Rivers an estate of more than 32000 acres in Cranborne Chase.[4]

In 1880, Lane-Fox inherited the estates of his cousin, Horace Pitt-Rivers, 6th Baron Rivers and with it the remainder of the Richard Rigby fortune. It was "an event that transformed his life."[2] He was required to adopt the surname Pitt-Rivers as part of the bequest.[2] In Q1, 1853,[6] Pitt-Rivers (still under the surname Fox) married The Honourable Alice Margaret Stanley (1828–1910), daughter of the politician Edward Stanley, 2nd Baron Stanley of Alderley and of the women's education campaigner Henrietta Stanley, Baroness Stanley of Alderley.

Pitt-Rivers and Alice had 9 children who reached adulthood, they were born between 1855 and 1866.[7] As they were all born before Augustus took the new surname in 1880, their births are registered under the name of Fox (or Lane-Fox):-

Three notable descendants of Augustus are his grandson, the anthropologist, eugenicist, anti-Semite and detainee in 1940 under Defence Regulation 18B George Pitt-Rivers,[8] his great-grandson, the anthropologist and ethnographer, Julian A. Pitt-Rivers, and his great-great-grandson, William Fox-Pitt, the equestrian. Another grandson was Michael Pitt-Rivers who gained notoriety in Britain in the 1950s when he was put on trial charged with "buggery".[9]

Lane-Fox had a long and successful military career as a staff officer. He was educated at the Royal Military College, Sandhurst, for six months at the age of fourteen and was commissioned into the Grenadier Guards on 16 May 1845 as an ensign.[10] In the course of a thirty-two year military career, albeit much leave-interrupted, he only once saw major front line action, at the Alma in 1854. In 1851 he became a member of the committee to experiment and report on the respective merits of the army’s smoothbore muskets. He was appointed to Woolwich to instruct in the use of the new Minié rifle in 1852. Subsequently, he was largely responsible for founding the Hythe school of Musketry in Kent and became its principle instructor, revising its "Instruction of Musketry Manuel". The remainder of his service career revolved around musketry instruction and in 1858 he published a paper‘On the improvement of the rifle as a weapon for general use’.[11] He bought a promotion to Captain on 2 August 1850.[12] He was promoted to the brevet rank of lieutenant-colonel of the army "for distinguished Service in the Field" during the Crimean War.[13] On 15 May 1857, he bought the rank of lieutenant-colonel in the Grenadier Guards.[14] The then Brevet-Major Lane-Fox, was appointed a member of the Fifth Class of the Order of the Medjidie in 1858 for "distinguished services before the enemy during the [Crimean War]".[15] He was promoted to colonel on 22 January 1867.[16] Pitt Rivers retired in 1882 and was accorded the honorary rank of Lt General.

Pitt Rivers' interests in archaeology and ethnology began in the 1850s, during postings overseas, and he became a noted scientist while he was a serving military officer. He was elected, in the space of five years, to the Ethnological Society of London (1861), the Society of Antiquaries of London (1864) and the Anthropological Society of London (1865). By the time he retired he had amassed ethnographic collections numbering tens of thousands of items from all over the world. Influenced by the evolutionary writings of Charles Darwin and Herbert Spencer, he arranged them typologically and (within types) chronologically. He viewed archaeology as an extension of anthropology and, as consequence, built up matching collections of archaeological and ethnographic objects to show longer developmental sequences – to support his views on cultural evolution.[17] This style of arrangement, designed to highlight evolutionary trends in human artefacts, was a revolutionary innovation in museum design. Pitt Rivers' ethnological collections form the basis of the Pitt Rivers Museum which is still one of Oxford's attractions. His researches and collections cover periods from the Lower Paleolithic to Roman and Medieval times, and extend all over the world.[18] The Pitt Rivers Museum curates more than half a million ethnographic and archaeological artifacts, photographic and manuscript collections from all parts of the world. The museum was founded in 1884 when the university accepted the gift of more than 20,000 artifacts from Pitt Rivers. The collections continue to grow, and the museum has been described as one of the “six great ethnological museums of the world”.[19] Pitt Rivers' Wessex Collection is housed in The Salisbury Museum in the city of Salisbury near Stonehenge. The new Wessex Gallery of archaeology opened there in 2014, funded by the Heritage Lottery Fund, and other sources. Pitt Rivers and other early archaeologists such as William Stukeley who first investigated the prehistory of Wiltshire, Cranborne Chase, Avebury and Stonehenge, are celebrated in the new Wessex Gallery.

The estates Pitt Rivers inherited in 1880 contained a wealth of archaeological material from the Roman and Saxon periods. He excavated these over seventeen seasons, from the mid-1880s until his death. His approach was highly methodical by the standards of the time, and he is widely regarded as the first scientific archaeologist to work in Britain. His most important methodological innovation was his insistence that all artefacts, not just beautiful or unique ones, be collected and catalogued. This focus on everyday objects as the key to understanding the past broke decisively with past archaeological practice, which verged on treasure hunting. It is Pitt Rivers' most important, and most lasting, scientific legacy. His work inspired Mortimer Wheeler among others to add to the scientific approach of archaeological excavation techniques.

Pitt Rivers created the Larmer Tree Gardens, a public pleasure garden, on the Rushmore estate near Tollard Royal in Wiltshire.

From 1882 Pitt Rivers was Britain's first Inspector of Ancient Monuments: a post created by anthropologist and parliamentarian John Lubbock who married Pitt Rivers' daughter, Alice. Charged with cataloguing archaeological sites and protecting them from destruction, he worked with his customary methodical zeal but was hampered by the limitations of the law, which gave him little real power over the landowners on whose property the sites stood. 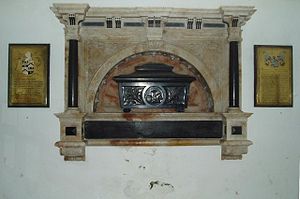 Pitt Rivers was an advocate for cremation at a time when such a practice was illegal in England.[21] Even though many people believed that it was immoral to destroy a corpse, the cremation movement favored a practical way to dispose of bodies. Pitt Rivers was cremated after his death in 1900.