Auray (Breton: An Alre) is a commune in the Morbihan department in Brittany in northwestern France.

Inhabitants of Auray are called Alréens.

The city is surrounded by the communes of Crac'h to the south and west, Brech to the north and Pluneret to the east. It is crossed by the Loch, a small coastal river which flows into the Gulf of Morbihan. The town is high on the west bank of the river Auray on the edge of the Armorican plateau which is cut deeply by the river. The port of Saint-Goustan is also in the valley, east of the River.

The port of Saint-Goustan is the site of the original town. It is located on the River Auray at the highest tidal reach of the river that ships can access. It was open to ships until the nineteenth century and was also a trading port which was particularly active in its routes with Spain and Britain. The decline of trade in the port began with the arrival of the railway in 1862 and today it is a marina and port of call on tours of the Gulf of Morbihan.[1]

Saint-Goustan, located in the lower town, was the first point at which the river could be bridged on the coastal road between Vannes and Quimper. Downstream, the River Auray is wide and steep.[2] Upstream, the marshes of the Loch valley makes passage difficult to Tréauray which is 4 km to the north. The Roman road from Lyon to Gésocribate (Le Conquet) via Nantes, passes the commune.

In the mid-19th century, the construction of a new road on an embankment on the marshes of Loch allowed direct access to the town from Vannes. In 1950, the Vannes-Lorient route nationale bypassed the centre of Auray to the north. In 1989, the four-carriageway Kerplouz viaduct was built on the RN165 over the Auray river downstream from St. Goustan. This rid the town of transit traffic, and created an industrial area south of the city centre.

On 18 December 1864, a rail link to Pontivy was opened. The building of the Pontivy - Saint-Brieuc section in 1872 completed a route that crosses Brittany from the south to the north. The Pontivy - Auray section was closed to passenger traffic on 2 October 1949 but is still used for transporting goods.[3]

On 24 July 1882, the Auray-Quiberon line was opened. This line, known as the Tire-bouchon (French: Corkscrew) is currently only operated in the summer. 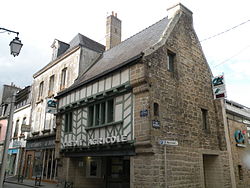 Timbered house in the town centre

Auray train station is located more than 2 km north of the town centre because of the problem of building a viaduct crossing the Loch valley. A new area was developed in the late 19th century along the road from Brech which has a junction with the Lorient road at the northern exit of the town next to the station. In particular, the Saint-Goustan port trading companies created premises there. The establishment of a train depot and a maintenance workshop for locomotives in the early 20th century attracted a greater workforce.[4]

Today, the station is served by the Paris - Rennes - Quimper TGV and Brittany TER. In the summer, the station experiences a significant increase in activity; it is one of the boarding points for the car-train service and the Auray - Quiberon line has been reopened to passenger traffic. The freight business is very small as it is everywhere in Morbihan.[5] 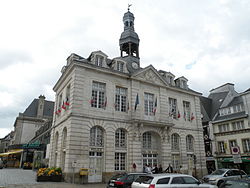 The Battle of Auray on 29 September 1364 was the last battle of the Breton War of Succession. Kerblois, the place in Brech at which the defeated Charles de Blois was killed is marked by a crucifix.

In 1632, sailors departed from the port of Saint-Goustan to re-capture the town of Port Royal in Acadia on behalf of Cardinal Richelieu.

Benjamin Franklin arrived at the port of Saint-Goustan on 3 December 1776 at the beginning of the US War of Independence to seek military aid from Louis XVI.

In 1795, after the failure of the Quiberon Expedition, part of the royalist Chouannerie rebellion, and the surrender of the Armée des émigrés ordered by Sombreuil on 21 July, most prisoners were transferred to Auray. After a summary trial by a military commission made up of citizens of the town, 750 people were shot and buried in a meadow in Brech on the western shore of the Loch, now called the Champ des martyrs (French: Martyrs' field). In 1829, their bones were exhumed and deposited in the vault of a memorial chapel at the Auray monastery.

The railway station was strategically important during the Second World War. Concrete used to build bunkers on the region's beaches travelled through the station. After the war, the collection of military scrap material led to the creation of business in Pi-park.

Auray's historic coat of arms: A shield of or and azure lozenges.

Auray's modern coat of arms: A field of gules, a stoat running with a floating scarf of ermine. A charge of azure with three fleur-de-lis of or.

Historically, the people of Auray have spoken the Vannes dialect of Breton but the citizens spoke French from the eighteenth century onwards. Breton was used for preaching in Auray parishes until the 1930s. In September 2008, 3.27% of children enrolled in primary schools in the town were bilingual.[6] 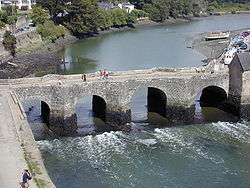 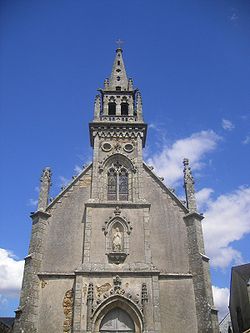 The Chapel of Notre-Dame-de-Lourdes

Auray is twinned with:[9]

Auray received the start of the second stage of the Tour de France 6 July 2008.