Austin, located on the West Side of Chicago, Illinois, is the largest (by population) of the city's 77 officially defined community areas, followed by Lake View. Its eastern boundary is the Belt Railway located just east of Cicero Avenue. Its northernmost border is the Milwaukee District/West Line. Its southernmost border is at Roosevelt Road from the Belt Railway west to Austin Boulevard. The northernmost portion, north of North Avenue, extends west to Harlem Avenue, abutting Elmwood Park. Other suburbs bordering Austin are Cicero and Oak Park. Also nearby is Berwyn.

Austin is also one of Chicago's largest community areas by land area. Several distinctive areas within Austin include Midway Park, a historic district of restored 19th-century single-family homes in the core of the original Austin subdivision; Galewood, the northernmost section of Austin along the northern border with Oak Park but south of the Galewood railyards; and The Island, Chicago a square mile in the extreme southwest corner of Austin, which is bordered by Cicero to the south and Oak Park to the west and which is isolated from other residential area in the city by the Eisenhower Expressway and Columbus Park to the north and an industrial area to the east.[citation needed] 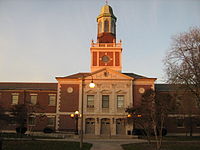 Henry W. Austin, a businessman and real estate speculator, created the 280-acre (1.1 km2) Austin subdivision,located at Lua error in Module:Coordinates at line 668: callParserFunction: function "#coordinates" was not found. (41.9, -87.76), in 1865. Austin included wide, tree-lined streets and a park originally named Holden Park. Originally Austin was within the Township of Cicero. Cicero decided to place its seat of government in Austin, and in 1870 a town hall opened in Austin. In 1898 Austinites had a majority of Cicero's town council and used the political influence to approve an extension of the Lake Street elevated line into the community. People from other parts of Cicero Township, including Berwyn and Oak Park, resented the influence and the dominance of Austinites and began an election to have Austin annexed into Chicago. In 1899 the annexation succeeded; Austinites opposed the annexation.[3]

Austin was a predominantly white neighborhood until the late 1960s (99.83% white in the 1960 census). It faced numerous infrastructure problems before the arrival of black residents. White residents of Austin in the early 1960s were against leaving their neighborhood for the suburbs, but a combination of events occurred in the years afterward changed that. City of Chicago officials were not responsive to the neighborhood's demands for improving neighborhood infrastructure. Residents felt the need to move elsewhere because of disinvestment, mortgage redlining, and blockbusting throughout the neighborhoods of Austin.[4] The suburbs gradually became better supported through an increased transportation system between Chicago and its suburbs, and many jobs left the city for the suburbs and overseas locations.

Significant riots began to occur on Chicago's West Side starting in 1965, and an especially damaging riot in 1968 (after Martin Luther King's death) prompted many white residents to leave. The West Side experienced a further declining infrastructure and lack of local jobs after this.

On June 6, 2013 a lesbian couple was beaten by around 10 men on North Leclaire Ave in Austin. Chicago Police Department officials labeled the attack a hate crime, and one man received criminal charges.[7]

°Midway Park Despite the massive scale change, the nineteenth-century village residential core is still visible in the Midway Park area north of Central and Lake, a designated National Register historic district (1985). This neighborhood boasts stately neoclassical and Queen Anne–style homes, many designed by architect Frederick Schock, as well as several structures by Frank Lloyd Wright and his students. 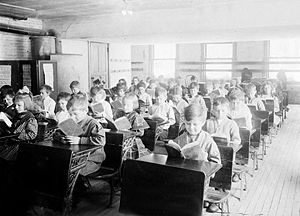 Children reading at desks in a classroom at the "Robert Emmet School" in 1911. The school was located at 5500 West Madison Street in the Austin community area of Chicago, Illinois

Other portions of the community area are zoned to Manley H.S., Marshall H.S., and Orr Campus

Austin is served by two free weekly newspapers. The Austin Voice[14] has been published in Austin since 1988. The Austin Weekly News,[15] founded in 2005, is published by The Wednesday Journal, a publisher of free weekly newspapers based on Oak Park, Illinois. Both papers are published on Wednesdays and distributed in stores, office buildings and recreational venues throughout the community. Austin is also served by Austin Talks,[16] an online publication maintained by journalism students at Chicago's Columbia College and underwritten in part by the Chicago Community Trust.