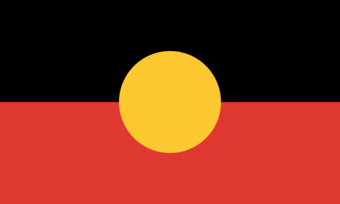 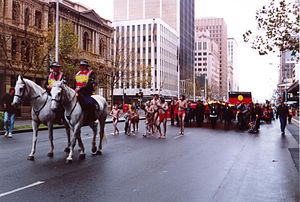 Marching from Parliament House down King William Street to Victoria Square, Adelaide, to celebrate the 30th anniversary of the Aboriginal Flag, 8 July 2001.

The Australian Aboriginal Flag is a flag that represents Aboriginal Australians. It is one of the official "Flags of Australia", and holds special legal and political status, but it is not the "Australian National Flag". It is often flown together with the national flag and with the Torres Strait Islander Flag, which is also an official flag of Australia.

The Australian Aboriginal Flag was designed in 1971 by Aboriginal artist Harold Thomas, who is descended from the Luritja people of Central Australia and holds intellectual property rights to the flag's design. The flag was originally designed for the land rights movement, and it became a symbol of the Aboriginal people of Australia.

The flag's width is 1.5 times its height. It is horizontally divided into a black region (above) and a red (Pantone 179) region (below). A yellow (Pantone 123) disc is superimposed over the centre of the flag.[1]

The Government of Australia granted it Flag of Australia status, under the Flags Act 1953, by proclamation on 14 July 1995.[2]

Due to an "administrative oversight",[3] the 1995 proclamation was not lodged so that it would continue in force indefinitely; hence it automatically expired on 1 January 2008. It was therefore almost identically replaced, on 25 January 2008, with effect as from 1 January.[4]

The symbolic meaning of the flag colours (as stated by Harold Thomas) is:[5] 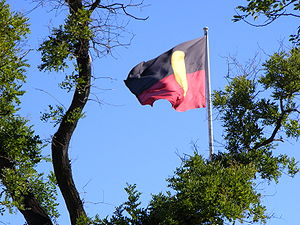 Aboriginal flag flying in Victoria Square, Adelaide (2008); near where the flag was first flown

The flag was first flown on National Aborigines Day in Victoria Square in Adelaide on 12 July 1971.[5] It was also used in Canberra at the Aboriginal Tent Embassy from late 1972. In the early months of the embassy—which was established in February that year—other designs were used, including a black, green and red flag made by supporters of the South Sydney Rabbitohs rugby league club, and a flag with a red-black field containing a spear and four crescents in yellow.

Cathy Freeman caused controversy at the 1994 Commonwealth Games by carrying the Aboriginal flag as well as the Australian national flag during her victory lap of the arena, after winning the 200 metres sprint; only the national flag is meant to be displayed. Despite strong criticism from both Games officials and Australian team president Arthur Tunstall, Freeman carried both flags again after winning the 400 metres. 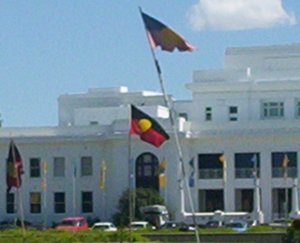 The decision in 1995 by Labor Prime Minister Paul Keating that the Aboriginal and Torres Strait Islander flags should be given the status of national flags was opposed by the Liberal Opposition at the time, Opposition Leader John Howard stating that "any attempt to give the flags official status under the Flags Act would rightly be seen by many in the community not as an act of reconciliation but as a divisive gesture".[6] Nonetheless, since Howard became Prime Minister in 1996 and under subsequent Labor governments, these flags have remained national flags. However, this decision was differently criticised by Thomas himself, who said that the Aboriginal flag "doesn't need any more recognition".[7]

In 1997, in the case Thomas v Brown and Tennant,[8] the Federal Court of Australia declared that Harold Thomas was the owner of copyright in the design of the Australian Aboriginal flag, and thus the flag has protection under Australian copyright law.[9][10] Thomas had sought legal recognition of his ownership and compensation following the Federal Government's 1995 proclamation of the design. His claim was contested by two others, George Brown and James Tennant.[11] Since then, Thomas has awarded rights solely to Carroll & Richardson – Flagworld Pty Ltd and Birubi Art Pty Ltd for the manufacture and marketing of the flag and of products featuring the flag's image.[12]

On the 30th anniversary of the flag in 2001, thousands of people were involved in a ceremony where the flag was carried from the Parliament of South Australia to Victoria Square. Since 8 July 2002, after recommendations of the Council's Reconciliation Committee, the Aboriginal Flag has been permanently flown in Victoria Square and the front of the Town Hall.[15]

The Aboriginal flag is sometimes substituted for the Union Flag in the canton of Australia's flag in proposed new Australian flag designs. Such flags have been presented in science fiction as futuristic Australian flags, as in the film Event Horizon, where it was worn by Sam Neill.[18] Many Aboriginal people object to this use, including Harold Thomas, who said "Our flag is not a secondary thing. It stands on its own, not to be placed as an adjunct to any other thing. It shouldn't be treated that way."[19]

The Australian Aboriginal Flag is celebrated in the controversial painting The First Supper (1988) by Susan Dorothea White where the central figure is an Aboriginal woman who displays the flag on her T-shirt.

The Australian Aboriginal Flag is the default flag in the web game NationStates.

The sale of condoms in the colours of the Aboriginal flag won a public health award in 2005 for the initiative's success in improving safe sex practices among young Indigenous people.[20]

The flag was to be part of the logo on Google Australia's home page on Australia Day 2010, but the company was forced to modify the design due to Harold Thomas demanding payment if Google were to use it.[21]