The history of the Australian Army can be divided into two periods:

Soldiers of the Australian 39th Battalion in September 1942 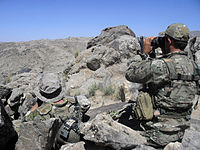 During its history the Australian Army has fought in a number of major wars, including: Second Boer War (1899–1902), First World War (1914–18), the Second World War (1939–45), Korea War (1950–53), Malayan Emergency (1950–60), Indonesia-Malaysia Confrontation (1962–66), Vietnam War (1962–73),[6] and more recently in Afghanistan (2001 – present) and Iraq (2003–2009).[7] Since 1947 the Australian Army has also been involved in many peacekeeping operations, usually under the auspices of the United Nations, however the non United Nations sponsored Multinational Force and Observers in the Sinai is a notable exception. Australia's largest peacekeeping deployment began in 1999 in East Timor, while other ongoing operations include peacekeeping on Bougainville, in the Sinai, and in the Solomon Islands. Humanitarian relief after 2004 Indian Ocean earthquake in Aceh Province, Indonesia, Operation Sumatra Assist, ended on 24 March 2005.[8] 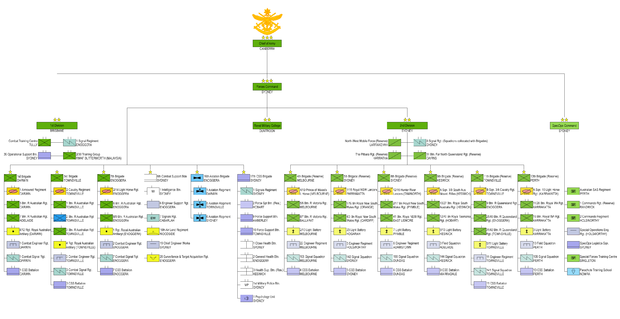 The Australian Army's structure from 2016

The 1st Division comprises a deployable headquarters, while 2nd Division under the command of Forces Command is the main home-defence formation, containing Army Reserve units. 2nd Division's headquarters only performs administrative functions. The Australian Army has not deployed a divisional-sized formation since 1945 and does not expect to do so in the future.[9]

1st Division carries out high-level training activities and deploys to command large-scale ground operations. It does not have any combat units permanently assigned. 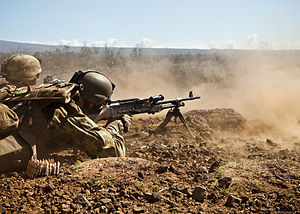 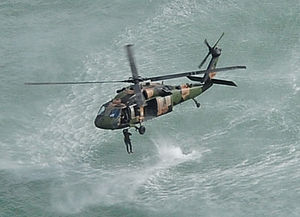 Forces Command controls for administrative purposes all non-special-forces assets of the Australian Army. It is neither an operational nor a deployable command.

Special Operations Command comprises a command formation of equal status to the other commands in the ADF. It is a brigade-sized formation responsible for all of Australia's special-forces assets.

Under a restructuring program known as Plan Beersheba announced in late 2011, the 1st, 3rd and 7th Brigades will be re-formed as combined-arms multi-role manoeuvre brigades with the 2nd Battalion, Royal Australian Regiment (part of the 3rd Brigade) forming the core of a future amphibious force[11] The force will be known as an Amphibious Ready Element and will utilise the former Royal Navy 16,000-tonne auxiliary Bay class landing ship RFA Largs Bay (L3006), bought for $100 million to become HMAS Choules.[12]

Main article: Colours, standards and guidons
File:AustArmyColours.jpg
All colours of the Army were on parade for the centenary of the Army, 10 March 2001.
File:Australian and Afghan soldiers wait for US Black Hawks.jpg
Australian soldiers wearing the Disruptive Pattern Combat Uniform alongside Afghan National Army soldiers in Afghanistan

Infantry, and some other combat units of the Australian Army carry flags called the Queen's Colour and the Regimental Colour, known as "the Colours".[13] Armoured units carry Standards and Guidons – flags smaller than Colours and traditionally carried by Cavalry, Lancer, Light Horse and Mounted Infantry units. The 1st Armoured Regiment is the only unit in the Australian Army to carry a Standard, in the tradition of heavy armoured units. Artillery units' guns are considered to be their Colours, and on parade are provided with the same respect.[14] Non-combat units (combat service support corps) do not have Colours, as Colours are battle flags and so are only available to combat units. As a substitute, many have Standards or Banners.[15] Units awarded battle honours have them emblazoned on their Colours, Standards and Guidons. They are a link to the unit's past and a memorial to the fallen. Artillery do not have Battle Honours – their single Honour is "Ubique" which means "Everywhere" – although they can receive Honour Titles.[16]

The Army is the guardian of the National Flag and as such, unlike the Royal Australian Air Force, does not have a flag or Colours. The Army, instead, has a banner, known as the Army Banner. To commemorate the centenary of the Army, the Governor General Sir William Deane, presented the Army with a new Banner at a parade in front of the Australian War Memorial on 10 March 2001. The Banner was presented to the Regimental Sergeant Major of the Army (RSM-A), Warrant Officer Peter Rosemond.

The Army Banner bears the Australian Coat of Arms on the obverse, with the dates "1901–2001" in gold in the upper hoist. The reverse bears the "rising sun" badge of the Australian Army, flanked by seven campaign honours on small gold-edged scrolls: South Africa, World War I, World War II, Korea, Malaya-Borneo, South Vietnam, and Peacekeeping. The banner is trimmed with gold fringe, has gold and crimson cords and tassels, and is mounted on a pike with the usual British royal crest finial.[17] 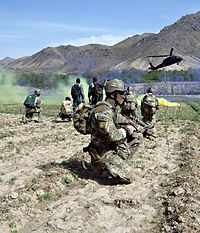 Other important Army bases include the Army Aviation Centre near Oakey, Queensland, Holsworthy Barracks near Sydney, Lone Pine Barracks in Singleton, New South Wales and Woodside Barracks near Adelaide, South Australia. The SASR is based at Campbell Barracks Swanbourne, a suburb of Perth, Western Australia.

Since 1948, the Australian Army has published its own journal titled the Australian Army Journal. Covering a broad range of topics including essays, book reviews and editorials, with submissions from serving members as well as professional authors, the journal's stated goal is to provide "...the primary forum for Army's professional discourse... [and to facilitate]... debate within the Australian Army ...[and raise] ...the quality and intellectual rigor of that debate by adhering to a strict and demanding standard of quality".[27] In 1976, the journal was placed on hiatus; however, publishing began again in 1999 and since then the journal has been published largely on a quarterly basis, with only minimal interruptions.[28]