The Australian dollar (sign: $; code: AUD) is the currency of the Commonwealth of Australia, including Christmas Island, Cocos (Keeling) Islands, and Norfolk Island, as well as the independent Pacific Island states of Kiribati, Nauru and Tuvalu. Within Australia, it is almost always abbreviated with the dollar sign ($), with A$ sometimes used to distinguish it from other dollar-denominated currencies.[2][3] It is subdivided into 100 cents.

As of 2011, the Australian dollar is the fifth most traded currency in the world, accounting for 7.6% of the world's daily share.[4] It trades in the world foreign exchange markets behind the US dollar, the euro, the yen and the pound sterling.[5] The Australian dollar is popular with currency traders, because of the comparatively high interest rates in Australia, the relative freedom of the foreign exchange market from government intervention, the general stability of Australia's economy and political system, and the prevailing view that the Australian dollar offers diversification benefits in a portfolio containing the major world currencies, especially because of its greater exposure to Asian economies and the commodities cycle.[6] The currency is commonly referred to by foreign-exchange traders as the "Aussie dollar".

With pounds, shillings and pence to be replaced by decimal currency on 14 February 1966, many names for the new currency were suggested. In 1965, the Prime Minister, Sir Robert Menzies, a monarchist, wished to name the currency the royal. Other proposed names included more exotic suggestions such as the austral, the oz, the boomer, the roo, the kanga, the emu, the digger, the quid, the dinkum and the ming (Menzies' nickname). Menzies' influence resulted in the selection of the "royal," and trial designs were prepared and printed by the Reserve Bank of Australia. The name for the currency proved unpopular and was later dropped in favour of the dollar.[7]

On 27 September 2012, the Reserve Bank of Australia stated that they had ordered work on a project to upgrade the current banknotes. The upgraded banknotes will incorporate a number of new features so that they remain secure into the future. [10] The new banknotes will be issued in the coming years.[11]

In 1966, coins were introduced in denominations of 1, 2, 5, 10, 20 and 50 cents. The initial 50-cent coins contained high silver (80%) content and were withdrawn after a year after the intrinsic value of the silver content was found to exceed the face value of the coins. One-dollar coins were introduced in 1984, followed by two-dollar coins in 1988. The one- and two-cent coins were discontinued in 1991 and withdrawn from circulation. In commemoration of the 40th anniversary of decimal currency, the 2006 mint proof and uncirculated sets included one- and two-cent coins. In early 2013, Australia's first triangular coin was introduced, to mark the 25th anniversary of the opening of Parliament House. The silver $5 coin is 99.9% silver and depicts Parliament House as viewed from one of its courtyards.[12] Cash transactions are rounded to the nearest five cents. As with most public changes to currency systems, there has been a great amount of seignorage of the discontinued coins. All coins portray the reigning Australian Sovereign, Queen Elizabeth II, on the obverse, and are produced by the Royal Australian Mint.

Australia has regularly issued commemorative 50-cent coins. The first was in 1970, commemorating James Cook's exploration along the east coast of the Australian continent, followed in 1977 by a coin for Queen Elizabeth II's Silver Jubilee, the wedding of Charles, Prince of Wales and Lady Diana Spencer in 1981, the Brisbane Commonwealth Games in 1982, and the Australian Bicentenary in 1988. Issues expanded into greater numbers in the 1990s and the 21st century, responding to collector demand. Australia has also made special issues of 20-cent, one-dollar and two-dollar coins.

Current Australian 5-, 10- and 20-cent coins are identical in size to the former Australian, New Zealand, and British sixpence, shilling, and two shilling (florin) coins. In 1990, the UK replaced these coins with smaller versions, as did New Zealand in 2006 – at the same time discontinuing the five-cent coin. With a mass of 15.55 g and a diameter of 31.51 mm, the Australian 50-cent coin is one of the largest coins used in the world today. In circulation, the old New Zealand 5-, 10- and 20-cent coins were often mistaken for Australian coins of the same value, owing to their identical size and shape. Until the size of the New Zealand coins was changed in 2004, Australian coins below the dollar in value were in circulation in both countries. Still, some confusion occurs with the larger-denomination coins in the two countries; Australia's $1 coin is similar in size to New Zealand's $2 coin, and the New Zealand $1 coin is similar in size to Australia's $2 coin. As such, Australian coins are occasionally found in New Zealand and vice versa.

The first polymer banknotes were issued in 1988[14] by the Reserve Bank of Australia, specifically polypropylene polymer banknotes (produced by Note Printing Australia), to commemorate the bicentenary of European settlement in Australia. All Australian notes are now made of polymer. 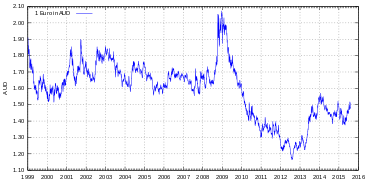 The cost of one Euro in Dollar.

In 1966, when the dollar was introduced, the international currency relationships were maintained under the Bretton Woods system, a fixed exchange rate system using a U.S. dollar standard. The Australian dollar, however, was effectively pegged to the British pound at an equivalent value of approximately 1 gram of gold.

On 12 December 1983, the dollar was floated, allowing its value to fluctuate dependent on supply and demand on international money markets. The decision was made on 8 December 1983 and announced on 9 December 1983.[19]

On 15 October 2010, the dollar reached parity with the US dollar for the first time since becoming a freely traded currency, trading above US$1 for a few seconds.[22] The currency then traded above parity for a sustained period of several days in November, and fluctuated around that mark into 2011.[23] On 27 July 2011, the dollar hit a record high since floating. It traded at a $1.1080 against the US dollar.[24]

Some commentators speculated that the value of the dollar in 2011 was related to Europe's sovereign debt crisis, and Australia's strong ties with material importers in Asia and in particular China.[25]

Economists posit that commodity prices are the dominant driver of the Australian, and this means changes in exchange rates of the Australian occur in ways opposite to many other currencies.[26] For decades, Australia's balance of trade has depended primarily upon commodity exports such as minerals and agricultural products. This means the varies significantly during the business cycle, rallying during global booms as Australia exports raw materials, and falling during recessions as mineral prices slump or when domestic spending overshadows the export earnings outlook. This movement is in the opposite direction to other reserve currencies, which tend to be stronger during market slumps as traders move value from falling stocks into cash.

The Australian is a reserve currency and one of the most traded currencies in the world.[6] Other factors in its popularity include a relative lack of central bank intervention, and general stability of the Australian economy and government.[27] In January 2011 at the World Economic Forum in Davos, Switzerland, Alexei Ulyukayev announced that the Central Bank of Russia would begin keeping Australian dollar reserves.[28]

1983 ABC news report on the first day of trading with a floating Dollar.

Prior to 1983, Australia maintained a fixed exchange rate. The first peg was between the Australian and British pounds, initially at par, and later at 0.8 GBP (16 shillings sterling). This reflected its historical ties as well as a view about the stability in value of the British pound. From 1946 to 1971, Australia maintained a peg under the Bretton Woods system, a fixed exchange rate system that pegged the U.S. dollar to gold, but the Australian dollar was effectively pegged to sterling until 1967.

With the breakdown of the Bretton Woods system in 1971, Australia converted the traditional peg to a fluctuating rate against the US dollar. In September 1974, Australia valued the dollar against a basket of currencies called the trade weighted index (TWI) in an effort to reduce the fluctuations associated with its tie to the US dollar.[29] The daily TWI valuation was changed in November 1976 to a periodically adjusted valuation.

On 12 December 1983, the Australian Labor government led by Prime Minister Bob Hawke and Treasurer Paul Keating floated the dollar, with the exchange rate reflecting the balance of payments and other market drivers.

Australia was the first country in the world to have a complete system of bank notes made from plastic (polymer). These notes provide much greater security against counterfeiting. The polymer notes are cleaner than paper notes, are more durable and easily recyclable.

Many forms of currency were used in the Australian colonies after the arrival of the first European settlers in 1788. In the rough early conditions barter was necessary, and payment in commodities like rum sometimes replaced money in transactions. Some of the first official notes used in Australia were Police Fund Notes, issued by the Bank of New South Wales in 1816.

After 1901, when the Australian colonies federated into a single Commonwealth, the federal government became responsible for the currency. The Australian Notes Act was passed in 1910. In 1913 the first series of Australian notes was issued, based on the old British system of 12 pence to a shilling, 20 shillings to a pound.

In 1963, Australia initiated the change to decimal currency. More than 1000 submissions were made about the name of the new currency unit. The Prime Minister of the day, Sir Robert Menzies, proposed the 'royal'. The 'dollar' was eventually chosen as the name, and decimal currency was introduced on 14 February 1966.

Shortly after the changeover, substantial counterfeiting of $10 notes was detected. This provided an impetus for the Reserve Bank of Australia to develop new note technologies jointly with the Commonwealth Scientific and Industrial Research Organisation.

The revolutionary polymer notes were first introduced in 1988 with the issue of a commemorative $10 note,[30] marking Australia's bicentenary by featuring the theme of settlement. The note depicted on one side a young Aborigine in body paint, with other elements of Aboriginal culture. On the reverse side was the ship Supply from the First Fleet, with a background of Sydney Cove, as well as a group of people to illustrate the diverse backgrounds from which Australia has evolved over 200 years.

Polymer note technology was developed by Australia, and Australia prints polymer banknotes for a number of other countries. In 1988, Australia introduced its first polymer bank note and in 1996, Australia became the first country in the world to have a complete series of polymer notes. Australia's notes are printed by Note Printing Australia, a wholly owned subsidiary of the Reserve Bank of Australia. Note Printing Australia prints polymer notes or simply supplies the polymer substrate[36] for a growing number of other countries including Bangladesh, Brunei, Canada, Chile, Indonesia, Kuwait, Malaysia, Mexico, Nepal, New Zealand, Papua New Guinea, Romania, Western Samoa, Singapore, Solomon Islands, Sri Lanka, Thailand and Vietnam. Many other countries are showing a strong interest in the new technology.

All Australian coins depict Queen Elizabeth II on the obverse, with different images on the reverse of each coin.

Australia's coins are produced by the Royal Australian Mint, which is located in the nation's capital, Canberra. Since opening in 1965, the Mint has produced more than 14 billion circulating coins, and has the capacity to produce more than two million coins per day, or more than 600 million coins per year. The Royal Australian Mint has an international reputation for producing quality numismatic coins, and won an international award for 'Best Silver Coin 2006' for its Silver Kangaroo coin design.

In early 2015 the Reserve Bank of Australia announced that a tactile feature will be added to all new notes.[37] The tactile feature is an embossed feature to assist the vision-impaired in identifying the denomination. A similar feature is used on the Canadian currency.[38]