The Australian property market comprises the trade of land and its permanent fixtures located within Australia. The market has shown steady growth of around 3% per annum since the 1970s. Since the 1990s, however, prices have risen by around 6% per annum.[1] House prices in Australia receive considerable attention from the media and the Reserve Bank.[2]

In 2011 there were 8.6m households with an average household size of 2.6 persons per household.[3] Freestanding houses have historically comprised most building approvals, but recent data shows a trend towards higher density housing such as townhouses and units.[4] Turnover rates vary across market cycles, but typically average 6% per year.[5]

The Australian property market is non-uniform, with high variation observed across the major cities and regional areas.[6]

In Sydney, as of March 2010, the Property Market's vacancy rate reached 0.53% signalling that the market is recovering, as these rates had reached 2% in August 2009. As of July 2015, the Property Market in Sydney has surged in the first Q of 2015, up 3.1%.[7] Sydney's eastern and northern suburbs typically attract the highest prices.[8] 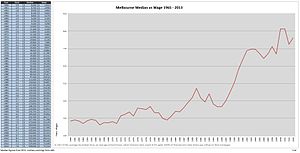 In the late 2000s, housing prices in Australia, relative to average incomes, were among the highest in the world. As at 2011, house prices were on average six times average household income, compared to four times in 1990.[9] This prompted speculation that the country was experiencing a real estate bubble, like many other countries.[10]

Australian property investors often apply the practice of negative gearing. This occurs when the investor borrows money to fund the purchase of the property, and the income generated by the property is less than the cost of owning and managing the property including interest.[12] The investor is expecting that capital gains will compensate for the shortfall. Negative gearing receives considerable media and political attention due to the perceived distortion it creates on residential property prices.