Australians (/əˈstreɪljənz/), colloquially known as Aussies (/ɒziːz/), are a people associated with the continent of Australia, sharing a common history, culture, and language (Australian English). Present-day Australians are citizens of the Commonwealth of Australia, governed by its nationality law.

The majority of Australians descend from the peoples of the British Isles. The Colony of New South Wales was established by the Kingdom of Great Britain in 1788, with the arrival of the First Fleet, and five other colonies were established in the early 19th century, now forming the six present-day Australian states. Many early settlements were penal colonies, and transported convicts (and, later, ex-convicts) made up a significant proportion of the population in most colonies. Large-scale immigration did not occur until the 1850s, following a series of gold rushes. Further waves of immigration occurred after the First and Second World Wars, with many post-World War II migrants coming from southern and eastern Europe, the Middle East, south and east Asia, and the Pacific islands. Prior to British settlement, Australia was inhabited by various indigenous peoples – Aboriginal Australians, Aboriginal Tasmanians, and Torres Strait Islanders, a Melanesian people. A small percentage of present-day Australians descend from these peoples.

The development of a separate Australian identity and national character is most often linked with the period surrounding the First World War, which gave rise to the concept of the Anzac spirit. The Eureka Rebellion of 1854 and various events of the Second World War, most notably the Kokoda Track campaign, are also frequently mentioned in association with Australian identity. However, Australian culture predates the federation of the Australian colonies by several decades – Australian literature, most notably the work of the bush poets, dates from colonial times, while sporting teams representing the whole of Australia have been in existence since the 1870s. As a result of many shared linguistic, historical, cultural and geographic characteristics, Australians have often identified closely with New Zealanders in particular along with, to a lesser extent, other Anglosphere nations.

The majority of Australians or their ancestors immigrated within the past three centuries, with the exception of the Indigenous population and other outer lying islands who became Australian through expansion of the country. Despite its multi-ethnic composition, the culture of Australia held in common by most Australians can also be referred to as mainstream " Australian culture", a Western culture largely derived from the traditions of British and Irish colonists, settlers, and immigrants. Large-scale immigration occurred after the First and Second World Wars, with many post-World War II migrants coming from Southern and Eastern Europe introducing a variety of elements. Immigration from the Middle East, south and east Asia, and the Pacific islands has also been having an impact.

The predominance of the English language, the existence of a democratic system of government drawing upon the British traditions of Westminster Government, Parliamentarianism and constitutional monarchy, American constitutionalist and federalist traditions, Christianity as the dominant religion, and the popularity of sports originating in (or influenced by) the British Isles, are all evidence of a significant Anglo-Celtic heritage. Australian culture has diverged significantly since British settlement.

Today, Australians of Anglo and other European descent are the dominant majority in Australia, estimated at 85–92% of the total population.[24][25] Historically, European immigrants had great influence over Australian history and society, which resulted in the perception of Australia as a Western country.[26][27]

Since soon after the beginning of British settlement in 1788, people of European descent have formed the majority of the population in Australia. The majority of Australians are of British – English, Scottish, Welsh, Cornish, or Manx – and Irish ancestral origin (grouped together as "Anglo-Celtic").

Although some observers stress Australia's convict history, the vast majority of early settlers came of their own free will.[28] Far more Australians are descended from assisted immigrants than from convicts, the majority were British and Irish.[29] About 20% of Australians are descendants of convicts.[30] Most of the first Australian settlers came from London, the Midlands and the North of England, and Ireland.[31][32][33] Settlers that arrived throughout the 19th century were from all parts of the United Kingdom and Ireland, a significant proportion of settlers came from the Southwest and Southeast of England, from Ireland and from Scotland.[34] Anglo-Celtic Australians (Northern European settlers from England, Scotland, Wales, and Ireland) have been highly influential in shaping the nation's culture. By the mid-1840s, the numbers of freeborn settlers had overtaken the convict population. In 1888, 60 percent of the Australian population had been born in Australia, and almost all had British ancestral origins. Out of the remaining 40 percent, 34 percent had been born in the British Isles, and 6 percent were of European origin, mainly from Germany and Scandinavia.[35] In the 1840s, Scots-born immigrants constituted 12 percent of the Australian population. There were 1.3 million British migrants to Australia in the period from 1861–1914, of which 13.5 percent were Scots. 5.3 percent of the convicts transported to Eastern Australia between 1789 and 1852 were Scots.[36] By 1850, there were 290,000 Aboriginal Australians. The European population grew from 0.3 percent of the population of the continent at 1800 to 58.6 percent at 1850.[37] Germans formed the largest non-British community for most of the 19th century.[38] The census of 1901 showed that 98 percent of Australians had British ancestral origins, which was considered as "more British than Britain itself".[39] Between 1901 and 1940, 140,000 non-British European immigrants arrived in Australia (about 16 percent of the total intake).[40] Before World War II, 13.6 percent were born overseas, and 80 percent of those were British.[41] In 1939 and 1945, still 98 percent of Australians had British/Anglo-Celtic ancestral origins.[42] Until 1947, the vast majority of the population were of British origin.[43] During the 1950s, Australia was the destination of 30 per cent of Dutch emigrants and the Netherlands-born became numerically the second largest non-British group in Australia.[44] In 1971, 70 percent of the foreign born were of European origin. Abolition of the White Australia Policy in the mid-1970s led to a significant increase in non-European immigration, mostly from Asia and the Middle East. 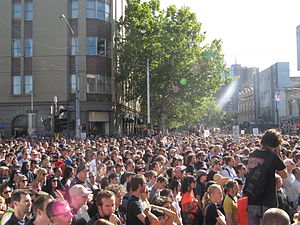 Melbournians during the live music rally in 2010

Almost one Australian in four was born elsewhere. In 1981, around 50 percent of immigrants were from Europe, and 2.7 percent were from Asia.[45] In 1998 about 40 percent of all immigrants to Australia had been born in Asia.[46] People from the United Kingdom remain the largest group amongst those born overseas.[47] In 2001 were 51 percent from Europe, 29 percent from Asia, 11 percent from Oceania, and 4 percent came from the Americas.[48] In 1996, over 8 million Australians had at least three ancestries, and over 3 million had four or more.[49]

By 2000, a majority of Australia's population was native born, and over 90 percent were descended from people from the British Isles.[50] In 2007, more than 92 percent of all Australians descended from Europeans.[51] In the 2006 Census 455,026 people (or 2.3% of the total Australian population) reported they were of Aboriginal and/or Torres Strait Islander origin.[52] 28 percent of the Australian population reported mixed or multiple ancestries in the 2006 census.[53] In 2006, 63% of the population had reported British ancestry, although many others reported their ancestry as simply "Australian".[54]

Indigenous Australians are descendants of the original inhabitants of the Australian continent.[58] Their ancestors are believed to have migrated from Africa to Asia around 70,000 years ago[59] and arrived in Australia around 50,000 years ago.[60][61] The Torres Strait Islanders are a distinct people of Melanesian ancestry, indigenous to the Torres Strait Islands, which are at the northernmost tip of Queensland near Papua New Guinea, and some nearby settlements on the mainland. The term "Aboriginal" is traditionally applied to only the indigenous inhabitants of mainland Australia and Tasmania, along with some of the adjacent islands. Indigenous Australians is an inclusive term used when referring to both Aboriginal and Torres Strait islanders, i.e.: the "first peoples".

Dispersing across the Australian continent over time, the ancient peoples expanded and differentiated into hundreds of distinct groups, each with its own language and culture.[62] More than 400 distinct Australian Aboriginal peoples have been identified across the continent, distinguished by unique names designating their ancestral languages, dialects, or distinctive speech patterns.[63]

James Cook claimed the east coast for Great Britain in 1770; also the west coast was later settled by Britain. At that time, the indigenous population was estimated to have been between 315,000 and 750,000,[64] divided into as many as 500 tribes[citation needed] speaking many different languages. In the 2006 Census, 407,700 respondents declared they were Aboriginal, 29,512 declared they were Torres Strait Islanders, and a further 17,811 declared they were both Aboriginal and Torres Strait Islander.[52] After adjustments for undercount, the indigenous population as of end June 2006 was estimated to be 517,200, representing about 2.5% of the population.[64]

A census in 2011 showed 60.2% of Australia's population declared themselves as having European ancestry. In addition, many other respondents described themselves as simply "Australian", which does not imply Indigenous descent. The total indigenous population is estimated to be about 520,000 individuals, including people of mixed descent.[64] In the 2011 Census, Australians reported around 300 different ancestries. The most commonly reported ancestries were English (33.7 per cent) and Australian (33 per cent). A further 6 of the leading 10 ancestries reflected the European heritage in Australia – Irish (9.7 per cent), Scottish (8.3 per cent), Italian (4.3 per cent), German (4.2 per cent), Greek (1.8 per cent) and Dutch (1.6 per cent). Other most common ancestries in the top 10 were Chinese (4.0 per cent) and Indian (1.8 per cent).[65]

In the 2011 Census residents were asked to describe their ancestry, in which up to two could be nominated. Proportionate to the Australian resident population, the most commonly nominated ancestries were:[66][67]

Statistics do not exist as to the number of Australians who currently are dual citizens. In 2000, it was estimated to be 4 to 5 million people.[72]

The current Australian population is estimated at 27,152,000 (15 May 2021).[73] This does not include an estimated 1 million Australians living overseas, but it includes the estimated 24% of Australians born overseas (in various nations, but predominantly the United Kingdom, New Zealand, Italy, China, Vietnam, Pakistan, India, the Philippines, and Greece).[74][75] There are an estimated 1 million Australians (approximately 5% of the population) residing outside Australia. The Trans-Tasman Travel Arrangement facilitates open migration to and from New Zealand.[76]

Australians have various religions and spiritual beliefs, with the majority (61%) being Christian according to the 2011 census.[78] As in many Western countries, the level of active participation in church worship is lower than would be indicated by the proportion of the population identifying themselves as Christian; weekly attendance at church services was about 1.5 million in 2001,[79] about 7% of the population (21.5 million[80]) that year.