From Infogalactic: the planetary knowledge core
Jump to: navigation, search
Not to be confused with Australia, Australasia, or Austria.

Austrasia formed the northeastern section of the Merovingian Kingdom of the Franks during the 6th to 8th centuries.

Austrasia, which was centred on the Middle Rhine and the Moselle, was the original territory of the Frankish tribes prior to their unification under Clovis I. In AD 567, it became a separate kingdom within the Frankish Empire and was ruled by Sigebert I. It eventually lost its territorial character in the Carolingian Empire in the 8th century.

The name Austrasia is not well attested in the Merovingian period. It is a latinisation of an Old Frankish name recorded first by Gregory of Tours in c. AD 580 and then by Aimoin of Fleury in c. AD 1000. As with the name Austria, it contains the word for "east", i.e. meaning "eastern land" to designate the original territory of the Franks in contrast to Neustria, the "new western land" in northern Gaul conquered in the wake of the Battle of Soissons of 486.

The area of Austrasia was centred on the Middle Rhine and included the basins the Moselle, Main and Meuse rivers. It bordered on Frisia and Saxony to the north, Thuringia to the east, Swabia and Burgundy to the south and to Neustria and Flanders to the west.

Metz served as the Austrasian capital, although some Austrasian kings ruled from Reims, Trier, and Cologne. Other important cities included Verdun, Worms and Speyer. Fulda monastery was founded in eastern Austrasia in the final decade of the Merovingian period.

In the High Middle Ages, its territory became divided among the duchies of Lotharingia and Franconia in Germany, with its some western portions including Reims and Rethel passing to France.

Its exact boundaries were somewhat fluid over the history of the Frankish sub-kingdoms, but Austrasia can be taken to correspond roughly to the territory of present-day Luxembourg, parts of eastern Belgium, north-eastern France (Lorraine and Champagne-Ardenne), west-central Germany (the Rhineland, Hesse and Franconia) and the southern Netherlands (Limburg, North Brabant, with a salient north of the Rhine including Utrecht and parts of Gelderland).

File:Metz st pierre nonnains.jpg
Ancient basilica of Saint-Pierre-aux-Nonnains from the 4th century in Metz, capital of the kingdom of Austrasia

After the death of the Frankish king Clovis I in 511, his four sons partitioned his kingdom amongst themselves, with Theuderic I receiving the lands that were to become Austrasia. Descended from Theuderic, a line of kings ruled Austrasia until 555, when it was united with the other Frankish kingdoms of Chlothar I, who inherited all the Frankish realms by 558. He redivided the Frankish territory amongst his four sons, but the four kingdoms coalesced into three on the death of Charibert I in 567: Austrasia under Sigebert I, Neustria under Chilperic I, and Burgundy under Guntram. These three kingdoms defined the political division of Francia until the rise of the Carolingians and even thereafter.

From 567 to the death of Sigbert II in 613, Neustria and Austrasia fought each other almost constantly, with Burgundy playing the peacemaker between them. These struggles reached their climax in the wars between Brunhilda and Fredegund, queens respectively of Austrasia and Neustria. Finally, in 613, a rebellion by the nobility against Brunhilda saw her betrayed and handed over to her nephew and foe in Neustria, Chlothar II. Chlothar then took control of the other two kingdoms and set up a united Frankish kingdom with its capital in Paris. During this period the first majores domus or mayors of the palace appeared. These officials acted as mediators between king and people in each realm. The first Austrasian mayors came from the Pippinid family, which experienced a slow but steady ascent until it eventually displaced the Merovingians on the throne.

In 623, the Austrasians asked Chlothar II for a king of their own and he appointed his son Dagobert I to rule over them with Pepin of Landen as regent. Dagobert's government in Austrasia was widely admired. In 629, he inherited Neustria and Burgundy. Austrasia was again neglected until, in 633, the people demanded the king's son as their own king again. Dagobert complied and sent his elder son Sigebert III to Austrasia. Historians often categorise Sigebert as the first roi fainéant or do-nothing king of the Merovingian dynasty. His court was dominated by the mayors. In 657, the mayor Grimoald the Elder succeeded in putting his son Childebert the Adopted on the throne, where he remained until 662. Thereafter, Austrasia was predominantly the kingdom of the Arnulfing mayors of the palace and their base of power. With the Battle of Tertry in 687, Pepin of Heristal defeated the Neustrian king Theuderic III and established his mayoralty over all the Frankish kingdoms. This was even regarded by contemporaries as the beginning of his "reign". It also signalled the dominance of Austrasia over Neustria, which would last until the end of the Merovingian era. 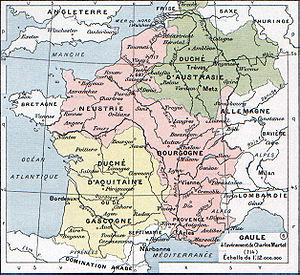 Map of Francia in 714 (Austrasia shown in green)

In 718, Karl Martel, with Austrasian support in his war against Neustria – each territory struggling to unite Francia under their hegemony – appointed Chlothar IV to rule in Austrasia. This was the last Frankish ruler who did not rule over all the Franks. In 719, Francia was united permanently under Austrasian hegemony.

Under the Carolingians and subsequently, Austrasia is sometimes used as a denominator for the east of their realm, the Carolingian Empire. It has been used as a synonym for East Francia, though this is somewhat inaccurate.