Russian diplomacy before the war

By the outbreak of the Russo–Turkish war, Russia had managed to secure a favorable international situation by signing treaties with the Persian Empire in 1732–1735 (which was at war with Turkey in 1730–1736) and supporting the accession to the Polish throne of Augustus III in 1735 instead of the French protégé Stanislaw I Leszczynski, nominated by pro-Turkish France. Austria had been Russia's ally since 1726.

The casus belli were the raids of the Crimean Tatars on Cossack Hetmanate (Ukraine) in the end of 1735 and the Crimean khan's military campaign in the Caucasus. In 1736, the Russian commanders envisioned the seizure of Azov and the Crimea.

In 1735, on the eve of the war, the Russians made peace with Persia, giving back all the remaining territory conquered during the Russo–Persian War (Treaty of Ganja).[2] 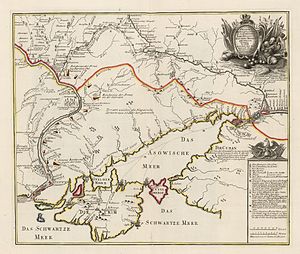 On May 20, 1736, the Russian Dnieper Army (62,000 men) under the command of Field Marshal Burkhard Christoph von Munnich took by storm the Turkish fortifications at Perekop and occupied Bakhchisaray on June 17.[3] However, lack of supplies coupled with the outbreak of an epidemic forced Münnich to retreat to Ukraine. On June 19, the Russian Don Army (28,000 men) under the command of General Peter Lacy with the support from the Don Flotilla under the command of Vice Admiral Peter Bredahl seized the fortress of Azov.[3] In July 1737, Münnich's army took by storm the Turkish fortress of Ochakov. Lacy's army (already 40,000 men strong) marched into the Crimea the same month and captured Karasubazar. However, Lacy and his troops had to leave the Crimea due to lack of supplies. The Crimean campaign of 1736 ended in Russian withdrawal into Ukraine, after an estimated 30,000 deaths; only 2,000 died in battle and the rest of hunger, famine and disease.[4]

In July 1737, Austria entered the war against Ottoman Empire, but was defeated a number of times, among others in the Battle of Banja Luka on August 4, 1737,[5] Battle of Grocka at 18, 21–22 July 1739,[6] and then lost Belgrade after an Ottoman siege from July 18 to September 1739. In August, Russia, Austria and Ottoman Empire began negotiations in Nemirov, which would turn out to be fruitless. There were no significant military operations in 1738. The Russian Army had to leave Ochakov and Kinburn due to the plague outbreak.

The final stage of the war

In 1739, the Russian army, commanded by Field Marshal Münnich, crossed the Dnieper, defeated the Turks at Stavuchany and occupied the fortress of Khotin (August 19) and Iaşi. However, Austria was defeated by the Turks at Grocka and signed a separate treaty in Belgrade with the Ottoman Empire on August 21.[7] This, coupled with the imminent threat of a Swedish invasion, forced Russia to sign the Treaty of Niš with Turkey on September 29, which ended the war.[8]

For Austria, the war proved a stunning defeat, and revealed the decay of its long-successful army. The Russian forces were more successful on the field, but they suffered huge losses (about 100,000 men, mainly of disease[9]) for limited gains.