From Infogalactic: the planetary knowledge core
Jump to: navigation, search
For other uses, see Auto-da-fé (disambiguation). 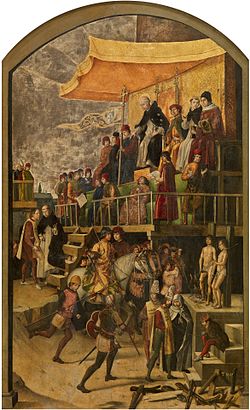 Saint Dominic presiding over an auto-da-fé, by Pedro Berruguete (around 1495[1]).

An auto-da-fé or auto-de-fé (from Portuguese auto da fé, meaning "act of faith") was the ritual of public penance of condemned heretics and apostates that took place when the Spanish Inquisition, Portuguese Inquisition or the Mexican Inquisition had decided their punishment, followed by the execution by the civil authorities of the sentences imposed.

The most extreme punishment imposed on those convicted was execution by burning. In popular usage, the term auto-da-fé, the act of public penance, came to mean the burning at the stake.

On 1 November 1478, King Ferdinand and Queen Isabella received permission from Pope Sixtus IV to name Inquisitors throughout their domains, to protect Catholicism as the true faith. It originally applied to the Crown of Castile, the domain of Isabella, but in 1483, Ferdinand extended it to his domain of the Crown of Aragon. Ferdinand's action met great resistance, and resulted in the assassination by conversos in 1485 of Pedro de Arbués. In spite of this social discontent it is considered that between 1487 and 1505 the Chapter of Barcelona processed more than 1000 people, of which only 25 were absolved.[3]

The monarchs immediately began establishing permanent trials and developing bureaucracies to carry out investigations in most cities and communities in their empire. The first Iberian auto-da-fé took place in Seville, Spain, in 1481; six of the men and women who participated in this first religious ritual were later executed.[4] Later, Franciscan missionaries brought the Inquisition to the New World.

The exact number of people executed by the Inquisition is not known. Juan Antonio Llorente, the ex-secretary of the Holy Office, gave the following numbers for the Spanish Inquisition excluding the American colonies, Sicily and Sardinia: 31,912 burnt, 17,696 burned in effigy, and 291,450 reconciled de vehementi (required to perform an act of penance).[5] Later in the nineteenth century, José Amador de los Ríos gave even higher numbers, stating that only between the years 1484 and 1525, 28,540 were burned in person, 16,520 burned in effigy and 303,847 penanced.[5] However, after extensive examinations of archival records, modern scholars provide lower estimates, indicating that fewer than 10,000 were actually executed during the whole history of the Spanish Inquisition,[6] perhaps around 3,000.[7]

The Portuguese Inquisition was established in 1536 and lasted officially until 1821. Its influence was much weakened by the late 18th century under the government of the Marquês of Pombal. They were also held in the Portuguese colony of Goa, India, following the establishment of the Inquisition there in 1562–1563.

Autos-da-fé also took place in Mexico, Brazil, and Peru.[8] Contemporary historians of the Conquistadors, such as Bernal Díaz del Castillo, recorded them. Although records are incomplete, one historian estimates that about 50 people were executed by the Mexican Inquisition.[9] 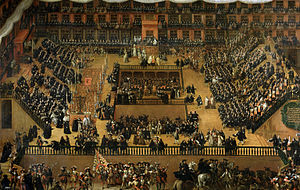 1683 painting by Francisco Rizi depicting the auto-da-fé held in Plaza Mayor, Madrid in 1680.

The auto-da-fé was a major aspect of the tribunals,[10] and the final step in the Inquisition process. It involved a Catholic Mass, prayer, a public procession of those found guilty, and a reading of their sentences.[11]

An Inquisition usually began with the public proclamation of a grace period of 40 days. Anyone who was guilty or knew of someone who was guilty was urged to confess. If the accused were charged, they were presumed guilty. Officials could apply torture during the trial. Inquisitors were required to hear and record all testimony.[citation needed] Proceedings were to be kept secret, and the identity of witnesses was not known to the accused.

After the trial, officials proclaimed the prisoner's sentence and administered in an auto-da-fé. The auto-da-fé was not an impromptu event, but thoroughly orchestrated. Preparations began a month in advance, and only occurred when the inquisition authorities believed there were enough prisoners in a given community or city. The ritual took place in public squares or esplanades and lasted several hours with ecclesiastical and civil authorities in attendance.[12]

Bordering the city's plaza, an all-night vigil would be held with prayers, ending in Mass at daybreak and a breakfast feast prepared for all who joined in.[13]

The ceremony of public penitence then began with a procession of prisoners, who bore elaborate visual symbols on their garments and bodies. These symbols were called sanbenito, and were made of yellow sackcloth. They served to identify the specific acts of treason of the accused, whose identities were kept secret until the very last moment. In addition, the prisoners usually had no idea what the outcome of their trial had been or their sentencing..[citation needed]

The prisoners were taken outside the city walls to a place called the quemadero or burning place. There the sentences were read. Prisoners who were acquitted or whose sentence was suspended would fall on their knees in thanksgiving,[14] but the condemned would be punished. Artistic representations of the auto-da-fé usually depict physical punishment such as whipping, torture, and burning at the stake.

The auto-da-fé was also a form of penitence for the public viewers, because they too were engaging in a process of reconciliation and by being involved were given the chance to confront their sins and be forgiven by the Church.[citation needed]

The auto-da-fé, usually represented as a heretic being burned at the stake, is a symbol used widely in the arts, especially in Europe.