The Autodromo Internazionale Enzo e Dino Ferrari is an auto racing circuit near the Italian town of Imola, 40 kilometres (24.9 mi) east of Bologna and 80 kilometres (49.7 mi) east of the Ferrari factory in Maranello. The circuit is named after Ferrari's late founder Enzo and his son Dino who had died in the 1950s. Before Enzo Ferrari's death in 1988 it was called 'Autodromo Dino Ferrari'. The circuit has FIA Grade 1 license.[1]

It was the venue for the Formula One San Marino Grand Prix (for many years two Grands Prix were held in Italy every year, so the race held at Imola was named after the nearby state) and it also hosted the 1980 edition of the Italian Grand Prix, which usually takes place in Monza. When Formula One visits Imola, it is seen as the 'home circuit' of Ferrari and masses of tifosi (Ferrari supporters) come out to support the local team.

Imola, as it is colloquially known, is one of the few major international circuits to run in an anti-clockwise direction. (Istanbul Park, Korea International Circuit, Marina Bay Street Circuit, Autódromo José Carlos Pace, Circuit of the Americas, and the Yas Marina Circuit are other anti-clockwise circuits used recently by Formula One.)

The track was inaugurated as a semi- permanent venue in 1953, and it had no chicanes, so the run from Rivazza all the way to Tosa, through the pits and the Tamburello was totally flat out, as was the run from Acque Minerali all the way to Rivazza was just a long straight with a few small bends; and the circuit remained in this configuration until 1972.

In April 1953, the first motorcycle races took place, while the first car race took place in June 1954. In April 1963, the circuit hosted its first Formula One race, as a non-championship event, won by Jim Clark for Lotus. A further non-championship event took place at Imola in 1979, which was won by Niki Lauda for Brabham-Alfa Romeo. In 1980 Imola officially debuted in the Formula One calendar by hosting the 50th Italian Grand Prix. It was the first time since the 1948 Edition held at Parco del Valentino that the Autodromo Nazionale Monza did not host the Italian Grand Prix. The race was won by Nelson Piquet and it was such a success that a new race, the San Marino Grand Prix, was established especially for Imola in 1981. The race was held over 60 laps of the 5 kilometre circuit for a total race distance of 300 kilometres.

The track was also used as part of the finishing circuit for the 1968 UCI Road World Championships, which saw Italian cyclist Vittorio Adorni winning with a lead of 10 minutes and 10 seconds over runner up Herman Van Springel, the second largest winning margin in the history of the championships, after Georges Ronsse's victory in 1928. In addition Adorni's countryman Michele Dancelli took the bronze and five of the top six finishers were Italian.[2] The circuit was also used for stage 11 of the 2015 Giro d'Italia, which was won by Ilnur Zakarin.[3]

Despite the addition of the chicanes, the circuit was subject to constant safety concerns, mostly regarding the flat-out Tamburello corner, which was very bumpy and had dangerously little room between the track and a concrete wall which protects the Santerno river that runs behind it. In 1987, Nelson Piquet had an accident there during practice and missed the race due to injury. In the 1989 San Marino Grand Prix, Gerhard Berger crashed his Ferrari at Tamburello after a front wing failure. The car caught fire after the heavy impact but thanks to the quick work of the firefighters and medical personnel Berger survived and missed only one race (the 1989 Monaco Grand Prix) due to burns to his hands. Michele Alboreto also had a fiery accident at the Tamburello corner testing his Footwork Arrows at the circuit in 1991 but escaped injury. Riccardo Patrese also had an accident at the Tamburello corner in 1992 while testing for the Williams team. 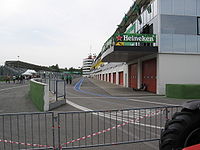 In the 1994 San Marino Grand Prix, during Friday practice Rubens Barrichello was launched over a curb and into the top of a tyre barrier at the Variante Bassa, knocking the Brazilian unconscious though quick medical intervention saved his life. During Saturday qualifying Austrian Roland Ratzenberger crashed head-on into a wall at over 310 km/h at the Villeneuve corner after his Simtek lost the front wing, dying instantly from a basilar skull fracture. The tragedy continued the next day, when the three-time World Champion Ayrton Senna lost control of his car and crashed into the concrete wall at the Tamburello corner on Lap 7. He succumbed shortly after impact as a piece of the car had pierced his helmet and skull. In two unrelated incidents, several spectators and mechanics were also injured during the event. 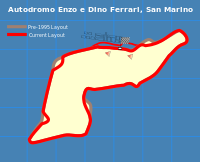 Diagram showing the differences between the 1994 and 2006 circuit layouts.

In the aftermath, the circuit continued to host Grands Prix, but revisions were immediately made in an attempt to make it safer. The flat-out Tamburello corner was reduced to a 4th gear left-right sweeper, and a gravel trap was added to the limited space on the outside of the corner. Villeneuve corner, previously an innocuous 6th gear right-hander into Tosa, was made a complementary 4th gear sweeper, also with a gravel trap on the outside of the corner. In an attempt to retain some of the quickness and character of the old circuit, the arduous chicane at Acqua Minerali was eliminated, and the Variante Bassa was straightened into a single chicane. Many say that the new circuit configuration is not as good as it used to be as a result of the new chicanes at Tamburello and Villeneuve.[4][5]

Another modification made to the Imola track is that of Variante Alta, which is situated at the top of the hill leading down to Rivazza and has the hardest braking point on the lap. The Variante Alta, formerly a high-kerbed chicane, was hit quite hard by the drivers which caused damage to the cars and occasionally was the site of quite a few accidents. Before the 2006 Grand Prix, the kerbs were lowered considerably and the turn itself was tightened to reduce speeds and hopefully reduce the number of accidents at the chicane. 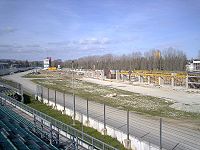 The Grand Prix was removed from the calendar of the 2007 Formula One season.[6] SAGIS, the company that owns the circuit, hoped that the race would be reinstated at the October 2006 meeting of the FIA World Motorsport Council and scheduled for the weekend of 29 April 2007, providing renovations to the circuit were completed in time for the race, but the reinstatement was denied.[7] 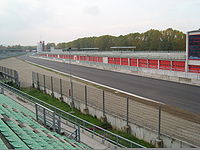 The old pit garages and paddock have been demolished and completely rebuilt while the pitlane was extended and resurfaced. The reconstruction overseen by German track architect Hermann Tilke.

In June 2008, with most of the reconstruction work completed, The FIA gave the track a "1T" rating, meaning that an official Formula One Test can be held at the circuit; circuits require the "1" homologation to host a Formula One Grand Prix.[8] However, as of August 2011, the track received a '1' FIA homologation rating after a recent inspection by Charlie Whiting.[9]

In 2011, the 6 Hours of Imola was revived and added to the Le Mans Series and Intercontinental Le Mans Cup as a season event.

During June of 2015, the owners of the circuit confirmed they were in talks to return to the Formula 1 World Championship calendar should Monza, whose contract runs out after the 2016 season, be unable to make a new deal to keep hosting a round of the world championship.[10]

In 2010, Jeremy Clarkson filmed his DVD, The Italian Job at the Imola circuit as well as Lydden Hill Race Circuit in England, and the Fiorano Circuit, Ferrari's test track.