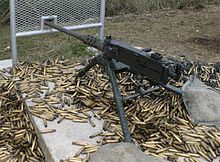 An automatic firearm continuously fires rounds as long as the trigger is pressed or held and there is ammunition in the magazine/chamber. In contrast, a semi-automatic firearm fires one round with each individual trigger-pull.[1]

Automatic and semi-automatic firearms can be divided into six main categories:

Automatic weapons tend to be restricted to military and police organizations in most developed countries that permit the use of semi-automatic firearms. Where automatic weapons are permitted, restrictions and regulations on their possession and use may be much more severe than for other firearms.[1] In the United States, taxes and strict regulations affect the manufacture and sale of fully automatic firearms under the National Firearms Act. A prospective user must go through an application process administered by the Bureau of Alcohol, Tobacco, Firearms and Explosives (ATF), which requires a federal tax payment of $200 and a thorough criminal background check. The tax payment buys a revenue stamp, which is the legal document allowing possession of an automatic firearm. The use of a gun trust to register with the BATFE has become an increasingly popular method of acquisition and ownership of automatic firearms.[3]

Other similar weapons not usually called automatic firearms are the following: