From Infogalactic: the planetary knowledge core
Jump to: navigation, search
For the German ATS Formula One team that operated from 1977 to 1984, see ATS (wheels).

ATS (Automobili Turismo e Sport) was an Italian automotive constructor and racing team that operated between 1963 and 1965, formed after the famous "Palace Revolution" at Ferrari.

The company was formed by Carlo Chiti and Giotto Bizzarrini, among others – intending for it to be a direct competitor to Ferrari both on the race track and on the street. Chiti and Bizzarrini built, with sponsorship from the Scuderia Serenissima's Count Giovanni Volpi, a road-going sports car and a Formula One racing car. 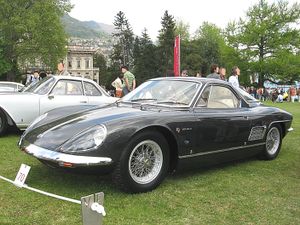 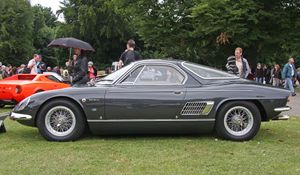 The sports car was the ATS 2500 GT, a small coupé developed by Chiti and Bizzarrini with a Franco Scaglione-designed bodywork built by Allemano. The engine was a mid-mounted 2.5 L V8 engineered by Chiti, capable of achieving 245 hp (180 kW) and accelerating to 257 km/h (160 mph).[citation needed] Only 12 cars were reportedly built, and few exist today. Apart from being one of the first mid-engine sports cars[citation needed] (the René-Bonnet Djet in France is said[by whom?] to have beaten it to the market by a few months), 2500 GT never gained fame or popularity, but its 90 degree DOHC V8 with a flatplane crankshaft was later developed into Alfa Romeo Tipo 33 engine in 2 L, 2.5 L and 3 L formats by Carlo Chiti at Autodelta.

The F1 car was the Tipo 100, a 1.5 L V8 engine powering a chassis that was a virtual copy of the outdated Ferrari 156. Drivers Phil Hill and Giancarlo Baghetti, also fleeing from Ferrari during a period of political turmoil, were signed to drive the new car, but a dismal 1963 Formula One season forced Chiti to close the door on the racing team. The ATS would later be used in the Derrington-Francis project spearheaded by the Rob Walker Racing Team's former chief mechanic, Alf Francis.

Count Volpi subsequently backed the Serenissima marque which used much technology similar to ATS. Bruce McLaren used a Serenissima engine for a few Grands Prix in 1966.

After the demise of ATS, Bizzarrini moved to Lamborghini before building his own cars as Bizzarrini, while Chiti founded Autodelta, which would work closely with Alfa Romeo for the following decades.

In 2013, the new ATS Leggera , a 2-seater spider with retro style, was announced.[1] The car was later renamed Stile50, and offered in two versions: the Speedster and the Spoon.[citation needed]