In 2014 Spain produced over 2.4 million cars which made it the 9th largest automobile producer country in the world and the 2nd largest car manufacturer in Europe after Germany.[1] Its car market stands among the largest in Europe. In 2009 LLAMA, the automotive industry was generating the 3.5 per cent of Spain's GDP,[2] employing about nine per cent of the manufacturing industry.

By the first half of the 20th century, Spain's economy was relatively underdeveloped compared to other western European countries. Things started to change for the Spanish car industry in the 1960s when an industrial policy was launched with measures which contributed the Spanish miracle. Later on, in the 1980s the Spanish automotive flagship, SEAT, was sold to the Volkswagen group, but by then the manufacturing cluster had already been consolidated and other international manufacturers were already producing in Spain.

SEAT is the sole active Spanish brand with a mass production potential and capability of developing its own models in-house. Today it operates as a subsidiary of the Volkswagen Group, formed in 1950 by the Instituto Nacional de Industria (INI) and six Spanish banks with Fiat assistance, under a name that stands for Sociedad Española de Automóviles de Turismo (Spanish Saloon/Sedan Car Company). In 1953 the company produced their first model, the SEAT 1400. This 44 hp (33 kW) four-door saloon car had a top speed of 75 mph (120 km/h). When production ceased in 1964 over 98,000 had been made. Models produced licensed by Fiat in the 1960s include the 600, 850, 1500 and 124. 815,319 of the 800 models were made between 1964 and 1967. SEAT produced its one millionth car in 1968. By 2003 this figure had risen to more than 14 million.

The SEAT 1200 Sport was a 2-door coupé produced by SEAT from 1975 to 1979. The car was known as the "Bocanegra" because of the shape of its always black plastic nose panel, which embraced the front grille and the headlights and incorporated, by 1970s standards, a prominent front bumper. "Boca negra" means "black mouth" in Spanish.

Up to 1981 most SEAT cars resembled Fiat models. The 1982 Ronda model was the first car produced by SEAT without assistance from Fiat. SEAT became a subsidiary of the Volkswagen Group in 1986.

Other cars produced during the 1980s include the Fura (1981–86), Marbella (1986–98), Málaga (1985–92) and Ibiza. The Marbella was a re-badged Fiat Panda, while the Giugiaro styled Ibiza (launched in 1984) was the company's first new product after the split from Fiat. The Malaga was the saloon version of the Ibiza, but the Ibiza was far more popular.

Models produced between 1990 and 2007 include the Arosa, León, Córdoba, Toledo, Alhambra and the Altea. In 2008 the company introduced the 1.4-litre, 170 hp (127 kW) Bocanegra (4th generation Ibiza) concept car. The Ibiza was in its fourth generation by 2008. The Toledo, launched in 1991, was SEAT's first large family car since its split from Fiat. The Cordoba, which ran between 1993 and 2008, was the saloon version of the second and third generation Ibiza hatchbacks, and was slightly more popular than the earlier Malaga. The Alhambra was SEAT's first MPV, launched in 1996 and based on the Volkswagen Sharan and Ford Galaxy. The Leon, launched in 1999, was a small family hatchback aimed at the likes of the Ford Focus and Opel Astra. SEAT's replacement for the long-running Marbella was the SEAT Arosa, launched in 1997; it formed the basis of the Volkswagen Lupo which was launched over a year later.

2009 models include the León Mk2, Córdoba Mk2, Toledo Mk3, Alhambra Mk1, Ibiza Mk4 and Altea and the new flagship sedan model Exeo. The Exeo being derived from the Audi A4, shares the same fundamental powertrain layout and platform.

Francisco Abadal, who used to work for Hispano-Suiza, produced two luxury models between 1912 and 1923. They were fitted with either a 3,104cc four-cylinder engine or a 4,521 cc six-cylinder engine. From about 1917 Buick engines were fitted and these cars were called Abadal- Buicks. Approximately 170 Imperia-Abadals were built in Belgium, including a 2,992 cc sports model. 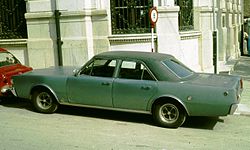 The company was founded in 1954 as Barreiros Diesel S.A and initially it produced diesel engines. In 1963 a licensing agreement was reached with Chrysler to build the Dodge Dart in Spain. Between 1965 and 1977 a total of 17,589 Barreiros Darts were produced. These were based on the Dodge Dart GL, the Dodge Dart GT (“sporty" version) and the Dodge 3700GT (using the body of the argentinian Dodge Polara/Coronado). A diesel version called the “Barreiros Diesel" was also produced. In 1969 Chrysler Europe took over the company. From the mid-1970s Barreiros started manufacturing the Chrysler 180 and later the Simca 1307 (called the Chrysler 150 in Spain) and the Simca Horizon. In 1978, PSA Peugeot Citroën purchased Chrysler Europe and former models were renamed; the Chrysler 150 becoming the Talbot 150. Barreiros later produced the Talbot Solara and Talbot Samba.

In the late 1940s Gabriel Voisin (French) designed a small car called the Biscooter. The license to build the vehicle was obtained by Autonacional S.A. The first Biscuter car was launched in Spain in 1953 and was called the Series 100 or the Zapatilla (little shoe). The original models did not have doors, windows or a reverse gear. It was powered by a one-cylinder, 197 cc, two-stroke 9 hp (7 kW) engine which supplied power only to the right front wheel. The Biscúter car was produced for about ten years.

In 1909 Arturo Elizalde Rouvier started a company was called "Sociedad Mercantil J. M. Vallet y Cia" to manufacturer car parts. A prototype called the Tipo 11 was launched in mid-1914. In 1915, King Alfonso XIII owned a 20cv Biada-Elizalde cabriolet Tipo 20. A 25cv sports version of the Tipo 20 was produced in 1919 as the Reine Victoria (name of the Queen consorts). It is believed to be the first Spanish car to feature four-wheel brakes. In 1920 the company started production of the four-cylinder, 3,817 cc, Model 29. Variants of this model were built until 1927. Production of the 8,143 cc straight-eight model, known as the Tipo 48, also began in 1920. The car had a built in tire pump which could also be used as a vacuum cleaner. A 5,181 cc straight-eight Gran Sport version of the Tipo 48 model, capable of 100 mph (160 km/h), was also produced. Production of Elizalde cars ceased in 1928.

ENASA sort of (Empresa Nacional de Autocamiones S.A.) was a Spanish truck manufacturing company, incorporated in 1946 having bought the automotive assets of the Spanish arm of Hispano-Suiza. It produced trucks, buses sport-cars and military armored vehicles under the Pegaso brand and, for a short while, Sava brands. Pegaso built about a hundred high-end Z-102 sports cars in the 1950s. The cars were in many ways advanced for the time, as they had all-wheel independent suspension, a five-speed gearbox, very powerful supercharged engines, and were offered with the choice of Touring, Saoutchik, Serra or Enasa's own luxury bodies. Enasa belonged to the state-owned INI industrial holding. In 1990 Enasa was sold to Iveco.

The Eugenio Cortes SA (company) manufactured cars from 1945 to 1951.Or 1953? The first Eucort model, which was based on a pre WW2 Germany Dampf Kraft Wagen (DKW) design, was fitted with 764 cc twin-cylinder two-stroke engine. Four-door sedan and a three-door estate versions were available. In 1950 the company started production of its final model, the two-stroke 1,034 cc Victoria. By the time the company ceased car production in 1951 (1953?) about 1,500 Eucort cars (including taxis) had been built. 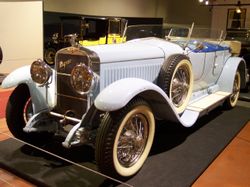 In 1898 Emilio de la Cuadra started a company in Barcelona called “La Cuadra” to produce electric cars. Four years later it was acquired by J. Castro. He changed the name to “Fábrica Hispano-Suiza de Automóviles” (Spanish-Swiss Car Factory). By the end of 1903 this company went bankrupt, re-emerging in 1904 as “La Hispano-Suiza Fábrica de Automóviles”. In 1906 Hispano-Suiza produced two models of 3.8 and 7.4 litres. Between 1907 and 1914 the company mass-produced a range of cars, plus a number of hand-built racing models, including the Type A (1907), Type 15 (1910) and the four-cylinder 3,620 cc 65 hp (48 kW) Alphonse XIII (1911–14). In 1911 a factory called “Hispano France” was established just outside Paris, moving to another location in 1914, when they took the name "Hispano-Suiza”. The Stork statuette fitted on top of each car’s radiator was based on the squadron emblem painted on the side of the aircraft used by a WWI French ace, who owned a Hispano-Suiza car.

The first model was a three-wheeled two-door car that was powered by a 125 cc single-cylinder two-stroke engine.

Other models include the Chiqui, a three-wheeler with single wheel at the rear, the Platillo Volante, a four-wheel coupé and the M190 with miniature Mercedes 190 body.

Many foreign car and truck makers - like Volkswagen, Nissan, Daimler AG, Ford, Renault, Opel, PSA Peugeot/Citroën, Iveco etc. - as well as suppliers have facilities and plants in Spain today developing and producing vehicles and components, not only for the needs of the internal market but also for exportation purposes,[3] with the contribution of the automobile industry in 2008 rising up to the second place with 17,6% out of the country's total exports.[4]