The Autonomous Region of Bougainville, previously known as the North Solomons Province, is an autonomous region in Papua New Guinea. The largest island is Bougainville Island (also the largest of the Solomon Islands archipelago), and the province also includes Buka Island and assorted outlying nearby islands including the Carterets. The capital is temporarily Buka, though it is expected that Arawa will be the permanent provincial capital. The population of the province is 249,358 (2011 census).

The island was named after the French explorer Louis Antoine de Bougainville, who made expeditions to the Pacific. (He is the namesake of the tropical flowering vines of the genus Bougainvillea). In 1885, the island was taken over by German administration as part of German New Guinea. Australia occupied it in 1914 during World War I. At the end of the war it was designated by the League of Nations as a mandatory power; it administered the island from 1918 until the Japanese invaded in 1942 during World War II.

Australia took over administration with the end of that war in 1945, managing until Papua New Guinea independence in 1975. It was appointed as a United Nations mandatory power, Australia having accepted dominion sovereignty under the Statute of Westminster 1931 in the Statute of Westminster Adoption Act 1942 and therefore being formally empowered to do so. It administered British and German New Guinea, but it was not the official colonial power.

During World War II, the island was occupied by Australian, American and Japanese forces. It was an important base for the RAAF, RNZAF and USAAF. On 8 March 1944, during the Pacific War, American forces were attacked by Japanese troops on Hill 700 on this island. The battle lasted five days, ending with a Japanese retreat.

The island is rich in copper and gold. A large mine was established at Panguna in the early 1970s by Bougainville Copper Limited, a subsidiary of Rio Tinto. Disputes by regional residents with the company over adverse environmental impacts, failure to share financial benefits, and negative social changes brought by the mine resulted in a local revival for a secessionist movement that had been dormant since the 1970s. Activists proclaimed the independence of Bougainville (Republic of North Solomons) in 1975 and in 1990, but at both times government forces suppressed the separatists.

In 1988, the Bougainville Revolutionary Army (BRA) increased their activity significantly. Prime Minister Sir Rabbie Namaliu ordered the Papua New Guinea Defence Force (PNGDF) to put down the rebellion, and the conflict escalated into a civil war. The PNGDF retreated from permanent positions on Bougainville in 1990, but continued military action. The conflict involved pro-independence and loyalist Bougainvillean groups as well as the PNGDF. The war claimed an estimated 15,000 to 20,000 lives.[1][2]

In 1996, Prime Minister Sir Julius Chan hired forces of Sandline International, a private military company previously involved in supplying mercenaries in the civil war in Sierra Leone, to put down the rebellion. The Sandline affair was a controversial incident that resulted from use of these mercenary troops. 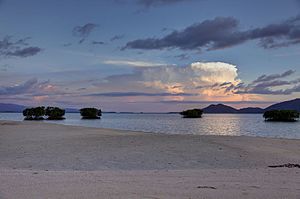 The conflict ended in 1997, after negotiations brokered by New Zealand. A peace agreement was completed in 2000 and, together with disarmament, provided for the establishment of an Autonomous Bougainville Government. The parties agreed to have a referendum in the future on whether the island should become politically independent.[3]

Elections for the first autonomous government were held in May and June 2005; Joseph Kabui, an independence leader, was elected President. He died in office on 6 June 2008. After interim elections to fill the remainder of his term, John Momis was elected as president in 2010 for a five-year term. He supports autonomy within a relationship with the national government of Papua New Guinea.

On 25 July 2005 rebel leader Francis Ona died after a short illness. A former surveyor with Bougainville Copper, Ona was a key figure in the secessionist conflict and had refused to formally join the island's peace process.

In 2015 Australia announced it will establish a diplomatic post in Bougainville for the first time.[4]

Bougainville has one of the world's largest copper deposits. This had been under development since 1972; one of its reserves has almost 915 million tonnes of copper with an average grade of 0.46% Cu. Mining and export of copper was the basis of the economy. 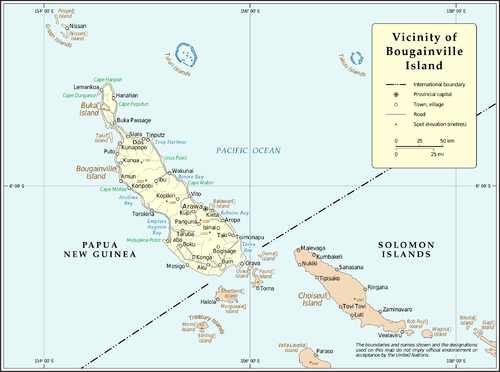 Each province in Papua New Guinea has one or more districts, and each district has one or more Local Level Government (LLG) areas. For census purposes, the LLG areas are subdivided into wards, and those into census units.[5]