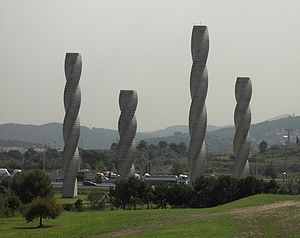 The UAB Columns, monument of the university

As of 2012[update], it consists of 57 departments in the experimental, life, social and human sciences, spread among 13 faculties/schools. All these centers together award a total of 85 qualifications in the form of first degrees, diplomas, and engineering degrees. Moreover, almost 80 doctoral programs, and more than 80 other postgraduate programs are offered. UAB has more than 40,000 students and more than 3,600 academic and research staff. The UAB is a pioneering institution in terms of fostering research. There are many research institutes in the campus, as well as other research centers, technical support services and service-providing laboratories. It should be noted that ALBA (synchrotron) located in the Barcelona Synchrotron Park is very close to the UAB. The UAB is considered to be the best University in Spain by the 2012 QS World University Rankings,[1] which ranked the university 176th overall in the world. Its subject rankings were: 144th in Life Sciences & Biomedicine, 92th[clarification needed] in Arts & Humanities, 106th in Natural Sciences, 95th in Social Sciences and 203rd in Engineering & IT.

The UAB campus is about 20 km away from the centre of Barcelona. It is accessible by air (flights to Barcelona, Girona, or Reus), by train (Ferrocarrils de la Generalitat, Renfe), by coach (SARBUS), or by car (AP-7 and C-58 motorways).

The Autonomous University of Barcelona was officially created by legislative decree on June 6, 1968. Previously, during the Second Spanish Republic, there had been plans for constituting a second university in Barcelona, but the Civil War and the following years of poverty under the early dictatorship did not allow these plans to become a reality until that year.

In 1969, an agreement was signed for the acquisition of the land where the university campus is currently located. During that year, the Faculty of Sciences and the Faculty of Economical Sciences started running. During the following three years, several faculties and professional schools were created, and the construction works on the campus land took place. At the end of this period, most existing Faculties and Schools are settled in the campus.

At the end of the dictatorship in 1976, the University introduced a plan to create a model of a democratic, independent university, described in a document known as Bellaterra Manifesto, which included a declaration of principles. Two years later, after the approval of the Catalan Statute, the University Council agreed to recourse to the Generalitat de Catalunya.

During the period between 1985 and 1992, the University underwent several faculty reforms and the creation of several new faculties. In 1993, the University Ville was inaugurated as a student residence integrated inside the Campus complex.

Vila Universitària is the residential complex of the Universitat Autònoma de Barcelona, located on its campus, which has 812 apartments with a total accommodation capacity for 2193 persons. The apartments at Vila Universitària enjoy a very privileged setting: they are located between the campus and the forest and have beautiful views, good train and bus connections and are about 35 minutes from the centre of Barcelona. [2]