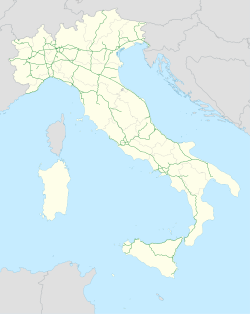 Map of the autostrade of Italy

The Autostrade (Italian: [autoˈstraːde]; singular Autostrada [autoˈstraːda]) are roads forming the Italian national system of motorways. The total length of the system is about 6,758 km.[1] In North and Central Italy this is mainly as tollways, with the biggest portion in concession to the Atlantia group (Autostrade per l'Italia) which operates some 3,408 km. Other operators include ASTM and ATP in the north-west, Serenissima and Autovie Venete in the north-east, SALT and Autocisa in the center, all under the control of the state-owned ANAS.

Italy was the first country in the world to build motorways, i.e., fast roads, reserved for motor vehicles.[citation needed] The Milano-Laghi motorway (connecting Milan to Varese) was devised by Piero Puricelli, a civil engineer and entrepreneur. He received the first authorization to build a public-utility fast road in 1921, and completed the construction (one lane each direction) between 1924 and 1926. By the end of the 1930s, over 400 kilometers of multi- and dual-single-lane motorways were constructed throughout Italy, linking cities and rural towns.

Italy's autostrade have a standard speed limit of 130 km/h (81 mph) for cars. Limits for other vehicles (or during foul weather and/or low visibility) are lower. Legal provisions allow operators to set the limit to 150 km/h (93 mph) on their concessions on a voluntary basis if these conditions are met: three lanes in each direction and a working SICVE, or Safety Tutor, speed-camera system that measure the average speed.

This is a list of tangenziali classified as autostrada.

Some autostrade are called bretelle, diramazioni or raccordi because they are short and have few exits.

Important alpine tunnels ((Italian) trafori) are identified by the capital letter "T" followed by a single digit number. Currently there are only three T-classified tunnels: Mont Blanc Tunnel (T1), Great St Bernard Tunnel (T2) and Frejus Road Tunnel (T4). Tunnels that cross the border between Italy and France (T1, T4) or Switzerland (T2), are treated as motorways (green signage, access control, and so on), although they are not proper motorways. The code T3 was once assigned to the Bargagli-Ferriere Tunnel in Ligurian Appennines before it was reclassified as SP 226.

RA stands for Raccordo autostradale (translated as "motorway connection"), a relatively short spur route that connects an autostrada to a nearby city or tourist resort not directly served by the motorway. These spurs are owned and managed by ANAS (with some exceptions, such as the RA7 that became A53 when assigned to a private company for maintenance). Some spurs are toll-free motorways (type-A), but most are type-B or type-C roads. All RA have separate carriageways with two lanes in each direction. Generally, they do not have an emergency lane.