An equinox is an astronomical event in which the plane of Earth's equator passes the center of the Sun,[2] making night and day of approximately equal length all over the planet. The equinoxes are the only times when the solar terminator (the "edge" between night and day) is perpendicular to the equator. As a result, the northern and southern hemispheres are equally illuminated.

The oldest meaning of the word "equinox" is the day when daytime and night are of approximately equal duration.[3] The word equinox comes from this definition, derived from the Latin aequinoctium, aequus (equal) and nox (genitive noctis) (night). The equinox is not exactly the same as the day when period of daytime and night are of equal length for two reasons.[2] First, sunrise, which begins daytime, occurs when the top of the Sun's disk rises above the eastern horizon. At that instant, the disk's center is still below the horizon. Second, Earth's atmosphere refracts sunlight. As a result, an observer sees daylight before the Sun's disk rises above the horizon geometrically. To avoid this ambiguity, the word equilux is sometimes used to mean a day on which the periods of daylight and night are equal.[4][note 1] Times of sunset and sunrise vary with an observer's location (longitude and latitude), so the dates when day and night are closest together in length depend on location.

Equinoxes on the Earth

When Julius Caesar established his calendar in 45 BC he set 25 March as the spring equinox.[citation needed] Because a Julian year (365.25 days) is slightly longer than the tropical year the calendar drifted with respect to the equinox, such that the equinox was occurring on about 21 March in AD 300 and by AD 1500 it had reached 11 March.

This drift induced Pope Gregory XIII to create a modern Gregorian calendar. The Pope wanted to continue to conform with the edicts concerning the date of Easter of the Council of Nicaea of AD 325, which means he wanted to move the vernal equinox to 21 March, which is the day allocated to it in the Easter table of the Julian calendar. However, the leap year intervals in his calendar were not smooth (400 is not an exact multiple of 97). This causes the equinox to oscillate by about 53 hours around its mean position. This in turn raised the possibility that it could fall on 22 March, and thus Easter Day might theoretically commence before the equinox. The astronomers chose the appropriate number of days to omit so that the equinox would swing from 19 to 21 March but never fall on the 22nd (although it can in a handful of years fall early in the morning of that day in the Far East).

Length of equinoctial day and night 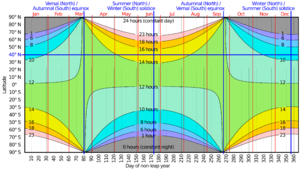 On the day of the equinox, the center of the Sun spends a roughly equal amount of time above and below the horizon at every location on the Earth, so night and day are about the same length. The word equinox derives from the Latin words aequus (equal) and nox (night). In reality, the day is longer than the night at an equinox. Day is usually defined as the period when sunlight reaches the ground in the absence of local obstacles. From the Earth, the Sun appears as a disc rather than a point of light, so when the center of the Sun is below the horizon, its upper edge is visible. Furthermore, the atmosphere refracts light, so even when the upper limb of the Sun is 0.4 degrees[citation needed] below the horizon, its rays curve over the horizon to the ground. In sunrise/sunset tables, the assumed semidiameter (apparent radius) of the Sun is 16 minutes of arc and the atmospheric refraction is assumed to be 34 minutes[citation needed] of arc. Their combination means that when the upper limb of the Sun is on the visible horizon, its center is 50 minutes of arc below the geometric horizon, which is the intersection with the celestial sphere of a horizontal plane through the eye of the observer. These effects make the day about 14 minutes longer than the night at the equator and longer still towards the poles. The real equality of day and night only happens in places far enough from the equator to have a seasonal difference in day length of at least 7 minutes, actually occurring a few days towards the winter side of each equinox.

Because the Sun is a spherical (rather than a single-point) source of light, the actual crossing of the Sun over the equator takes approximately 33 hours.[citation needed]

At the equinoxes, the rate of change for the length of daylight and night-time is the greatest. At the poles, the equinox marks the start of the transition from 24 hours of nighttime to 24 hours of daylight (or vice versa). Far north of the Arctic Circle, at Longyearbyen, Svalbard, Norway, there is an additional 15 minutes more daylight every day about the time of the spring equinox, whereas in Singapore (which is just one degree of latitude north of the equator), the amount of daylight in each daytime varies by just a few seconds.[citation needed]

Geocentric view of the astronomical seasons

In the half-year centered on the June solstice, the Sun rises north of east and sets north of west, which means longer days with shorter nights for the northern hemisphere and shorter days with longer nights for the southern hemisphere. In the half-year centered on the December solstice, the Sun rises south of east and sets south of west and the durations of day and night are reversed.

Also on the day of an equinox, the Sun rises everywhere on Earth (except at the poles) at about 06:00 and sets at about 18:00 (local time). These times are not exact for several reasons:

Day arcs of the Sun

Some of the statements above can be made clearer by picturing the day arc (i.e., the path the Sun tracks along the celestial dome in its diurnal movement). The pictures show this for every hour on equinox day. In addition, some 'ghost' suns are also indicated below the horizon, up to 18° below it; the Sun in such areas still causes twilight. The depictions presented below can be used for both the northern hemisphere and the southern hemisphere. The observer is understood to be sitting near the tree on the island depicted in the middle of the ocean; the green arrows give cardinal directions.

The following special cases are depicted:

The vernal equinox occurs in March, about when the Sun crosses the celestial equator south to north. The term "vernal point" is used for the time of this occurrence and for the direction in space where the Sun is seen at that time, which is the origin of some celestial coordinate systems: 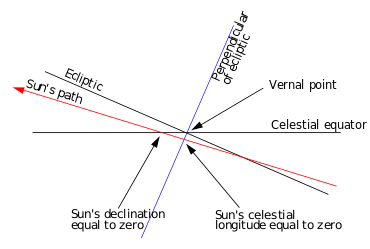 Strictly speaking, at the equinox the Sun's ecliptic longitude is zero. Its latitude will not be exactly zero since the Earth is not exactly in the plane of the ecliptic. Its declination will not be exactly zero either. (The ecliptic is defined by the center of mass of the Earth and Moon combined.) The modern definition of equinox is the instants when the Sun's apparent geocentric longitude is 0° (northward equinox) or 180° (southward equinox).[5][6][7] See the diagram to the right.

The autumnal equinox is at ecliptic longitude 180° and at right ascension 12h.

The same is true in western tropical astrology: the vernal equinox is the first point (i.e. the start) of the sign of Aries. In this system, it is of no significance that the equinoxes shift over time with respect to the fixed stars.

Using the current official IAU constellation boundaries – and taking into account the variable precession speed and the rotation of the celestial equator – the equinoxes shift through the constellations as follows[9] (expressed in astronomical year numbering in which the year 0 = 1 BC, −1 = 2 BC, etc.):

A number of traditional spring and autumn (harvest) festivals are celebrated on the date of the equinoxes.

Equinoxes of other planets

When the planet Saturn is at equinox, its rings reflect little sunlight, as seen in this image by Cassini in 2009.

Equinox is a phenomenon that can occur on any planet with a significant tilt to its rotational axis. Most dramatic of these is Saturn, where the equinox places its ring system edge-on facing the Sun. As a result, they are visible only as a thin line when seen from Earth. When seen from above – a view seen by humans during an equinox for the first time from the Cassini space probe in 2009 – they receive very little sunshine, indeed more planetshine than light from the Sun.[10]

This lack of sunshine occurs once every 14.7 years. It can last a few weeks before and after the exact equinox. The most recent exact equinox for Saturn was on 11 August 2009. Its next equinox will take place on 30 April 2024.[citation needed]

One effect of equinoctial periods is the temporary disruption of communications satellites. For all geostationary satellites, there are a few days around the equinox when the sun goes directly behind the satellite relative to Earth (i.e. within the beam-width of the ground-station antenna) for a short period each day. The Sun's immense power and broad radiation spectrum overload the Earth station's reception circuits with noise and, depending on antenna size and other factors, temporarily disrupt or degrade the circuit. The duration of those effects varies but can range from a few minutes to an hour. (For a given frequency band, a larger antenna has a narrower beam-width and hence experiences shorter duration "Sun outage" windows.)[citation needed]