From Infogalactic: the planetary knowledge core
Jump to: navigation, search
This article is about the French administrative région of Auvergne. For the historical county and province of Auvergne, see Auvergne (province).

listen); Occitan: Auvèrnhe / Auvèrnha) is a former administrative region of France. Since 1 January 2016, it is part of the new region Auvergne-Rhône-Alpes.[2] It comprises the four departments of Allier, Puy-de-Dôme, Cantal and Haute-Loire.

The administrative region of Auvergne is larger than the historical province of Auvergne, and includes provinces and areas that historically were not part of Auvergne. The Auvergne region is composed of the following old provinces:

The region contains many volcanoes, although the last confirmed eruption was around 6,000 years ago. They began forming some 70,000 years ago, and most have eroded away leaving plugs of unerupted hardened magma that form rounded hilltops known as puys.[3] 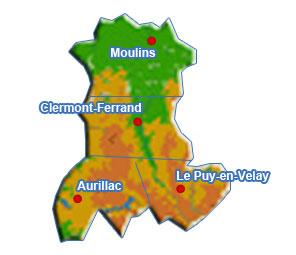 The "Chaîne des Puys" in Puy-de-Dôme

Auvergne has a surface area of 26,013 km² equivalent to 4.8% of France's total surface area. Auvergne is one of the smallest regions in France.

Auvergne is known for its mountain ranges and dormant volcanoes. Together the Monts Dore and the Chaîne des Puys include 80 volcanoes. The Puy de Dôme is the tallest volcano in the region with an altitude of 1,465 m. The Sancy Massif in the Monts Dore is the highest point in Auvergne (1,886 m).

The northern region is covered in hills while the southern portion is mountainous and dotted with pastures. The Domanial Forest of Tronçais covers nearly 11,000 hectares (27,170 acres)and is the largest oak forest in Europe.

There are two major rivers in Auvergne. The Loire, which runs through the southeast and borders the northeast, and the Allier which runs from north to south down the center of Auvergne with branches going east and west. Over many years the Allier river has created what are known as the Allier gorges. Auvergne has about 50 freshwater ponds and lakes. Some are high in the mountains and have volcanic origins. Guéry Lake is the highest lake in Auvergne.

Auvergne is bordered to the east by the Rhône-Alpes region, to the south by the Languedoc-Roussillon and Midi-Pyrenees regions, to the north by the Centre-Val de Loire and Burgundy regions, and to the west by the Limousin region.

The region is altogether very dry, and has very long winters paired with short summers.

The land of the Arverni

The region of Auvergne was named after the Arverni, one of the most powerful Gallic tribes. It was composed of the Gabali, the Vellavi, and the Cadurci whose sphere of influence included the regions of Languedoc and Aquitaine. Vercingetorix was granted the title of king in 52 BC. His father, Celtillos, had been elected as a king before him and he had been killed by his companions because he wanted the title to be hereditary. In the winter of 53/52 BC, Vercingetorix managed to enter into an alliance with all the Celtic tribes surrounding him by holding hostages of the king’s daughters or sons of each tribe, which gave him a guarantee for faithfulness and alliance. Following recent digging of archaeologists (radio programme of Yves Calvi with researchers in October 2007), the capital of the Arverni would have been situated between Gergovie, Corent, Aulnat and several other significant areas within 35 km. This gives us an estimation of a population of 150,000 inhabitants living in the centre and a total of more than 400,000 inhabitants living in the whole territory.

The Arverni were one of the most powerful and rich tribes in the antic Gaul because of:

One of the shrines of Auvergne is the battle of Gergovia, which would have taken place about 12 km away from Clermont-Ferrand, following the non proven interpretation made of the books of Caesar. Gergovia was the place where Vercingetorix beat Julius Caesar in 52 BC/ before he started chasing Caesar’s troops. Roman victory in Alesia (Alise-sainte-Reine) in Bourgogne, following the setting of several traps and fortifications over several hundreds of metres by the roman legionaries, which led to the imprisonment of Vercingetorix in Rome and to the creation of the city of Augustonemetum (former name of Clermont-Ferrand), probably onto one of the existing Arverni places. Recently, a foot made of stone, measuring 60 cm, has been found from a statue of 4,5 metres high, probably representing a god or roman emperor. In the 5th century, Sidonius Apollinaris, an Arverni nobleman and first bishop of Clermont-Ferrand, gave a testimony about the end of the Antiquity of the Auvergne.

In the 7th century, there was a dispute between the Franks and the Aquitani about the Auvergne. Conquered by the Carolingians, it was integrated for a certain time into the kingdom of Aquitania, except from one part called the county of Aurillac which was given to the father of Géraud d’Aurillac and which did not depend from the county of Auvergne, but directly from the king. The counts of Auvergne, the Guilhemides, slowly obtained their independence. In the 10th century, Auvergne was subject to rivalry between the counts of Poitiers and Toulouse. Under the reign of the Carolingians, the Auvergne included five secondary earldoms with a particular administrative system (Clermont, Turluron, Brioude, Tallende, Carlat (comitatus Cartladensis)) During the Middle Age, the earldom of Auvergne covered the current departments of Puy de Dome, the northern half of Cantal, as well as a small third in the North West of Haute-Loire, with the county of Brioude. The other part of Cantal constituted the direct territory of Aurillac Abbey, and a part of it was indentured to the viscounts of Millau, to form the Carlades. The Auvergne had gone through a very strict feudal regime, synonym for a dispersion of the political power. The Bishop of Clermont removed his city from the counts’ authority, who, as a result, favoured the nearby city of Montferrand. Later, a usurpation of the power of earl lead to the creation, by the legitimate robbed count, of a Dauphiné d’Auvergne, independent from the earl.

However the royal power took action in the area rather early. Philippe Auguste linked the biggest part of the county to the royal territory. The royal territory of Auvergne took Riom as an administrative center. Staying in the bosom of the Capetian family, the Auvergne is given as appanage to Alphonse de Poitiers, and then in 1360 as a duchy to Jean 1er de Berry, who also bought the area of Carlades. One of his daughters got married to the Duke of Bourbon, who became Duke of Auvergne. The Dukes of Bourbon acquired the Dauphiné of Auvergne through marriage, but in the end all their territories got confiscated by Francois 1er (1527)

One century after the Hundred Years’ War, the Auvergne plunged into religion wars. Some Calvinist militia made incursions in the Highland and they took by surprise castles and catholic villages. Then they gave them back, asking a ransom in return. Captain Merle in particular, firmly established in the nearby Gevaudan, took a ransom from Issoire but failed in Saint Flour. And this is how the city of Aurillac had been taken over, and its abbey was completely destroyed. In his time, Philippe Auguste had not been able to fully defeat the area : the Count kept holding on in Vic-le-Comte. The Queen of France Catherine de Medicis, inherited the last part of the earldom from her mother, which allowed the integration of the last feudal fiefdom, at the heart of Auvergne, to the royal territory. In 1665, Louis XIV temporarily set up an exceptional criminal court in Clermont-Ferrand and Le Puy en Velay, ‘les grands jours d’Auvergne (The Great Days of Auvergne), in order to comply with the plaints of the people, who were victim of violence and abuse of officials and noblemen of Auvergne. During the 18th century, the economic situation of the farmers got considerably better, thanks to the wise politic of the Auvergne intendants, who took the reins after the abbeys, and who developed farming, cheese manufacturing, agriculture, glasswork, ironwork and roads. During WWII, Vichy was the headquarters of the government of the French State.

Auvergne is an underpopulated area with an aging population. Auvergne is one of the least populated regions in Europe. The main communes in Auvergne are Vichy (26,501), Clermont-Ferrand (258,541), and Montluçon (60,993). 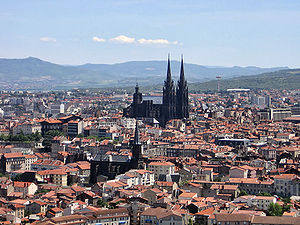 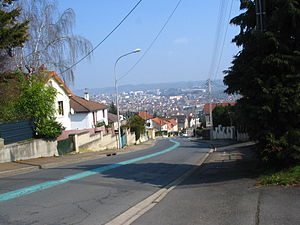 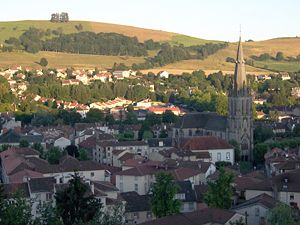 The region is predominantly agricultural with tourism slowly becoming more important. Cows are much in evidence and are used both for meat and for milk, which is made into a number of well-known cheeses: Bleu d'Auvergne, Cantal, Fourme d'Ambert and Saint-Nectaire.

Despite its small local market, the Auvergne region has developed many national and international companies, such as Michelin, Limagrain (seed), the group Centre France-La Montagne (regional daily press), Volvic mineral water (group Danone) and numerous dynamic SMEs around the two universities and large schools (engineers, doctors and business school) of its capital, Clermont-Ferrand.

Most of these companies are exporting more than 75% of their production.

While agriculture is important, Auvergne is a relatively industrial region as well, as the share of the working population in industry is 22% (110,000 jobs), versus the national average of 18%.

The main industry in Auvergne is the tyre industry, represented by Michelin, with headquarters and history is located in Clermont-Ferrand, and Dunlop, based in Montlucon.

These include the Thiers cutlery, metal Issoire, lace in Le Puy, and livestock as well as food in the Cantal.

The Auvergne is also one of the premier research areas in France with more than 8,000 researchers in the fields of chemistry, tire, steel, medical and pharmaceutical sciences in agricultural research (INRA's laboratories and Limagrain's laboratories), in biotechnology, seismology, meteorology, etc.

The 2002 film, To Be and to Have (Être et avoir), documents one year in the life of a one-teacher school in rural Saint-Étienne-sur-Usson, Puy-de-Dôme, Auvergne.[4]