In colloquial language, an average is the sum of a list of numbers divided by the number of numbers in the list. In mathematics and statistics, this would be called the arithmetic mean. However, the word "average" may also refer to the median, mode, or other central or typical value. In statistics, these are all known as measures of central tendency.

Along with the arithmetic mean above, the geometric mean and the harmonic mean are known collectively as the Pythagorean means.

Geometric mean can be thought of as the antilog of the arithmetic mean of the logs of the numbers.

Example: Geometric mean of 2 and 8 is

Harmonic mean for a non-empty collection of numbers a1, a2, …, an, all different from 0, is defined as the reciprocal of the arithmetic mean of the reciprocals of the ai's:

Inequality concerning AM, GM, and HM

A well known inequality concerning arithmetic, geometric, and harmonic means for any set of positive numbers is

It is easy to remember noting that the alphabetical order of the letters A, G, and H is preserved in the inequality. See Inequality of arithmetic and geometric means.

The mode, the median, and the mid-range are often used in addition to the mean as estimates of central tendency in descriptive statistics. 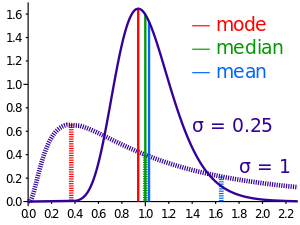 The most frequently occurring number in a list is called the mode. For example, the mode of the list (1, 2, 2, 3, 3, 3, 4) is 3. It may happen that there are two or more numbers which occur equally often and more often than any other number. In this case there is no agreed definition of mode. Some authors say they are all modes and some say there is no mode.

The median is the middle number of the group when they are ranked in order. (If there are an even number of numbers, the mean of the middle two is taken.)

Thus to find the median, order the list according to its elements' magnitude and then repeatedly remove the pair consisting of the highest and lowest values until either one or two values are left. If exactly one value is left, it is the median; if two values, the median is the arithmetic mean of these two. This method takes the list 1, 7, 3, 13 and orders it to read 1, 3, 7, 13. Then the 1 and 13 are removed to obtain the list 3, 7. Since there are two elements in this remaining list, the median is their arithmetic mean, (3 + 7)/2 = 5.

The table of mathematical symbols explains the symbols used below.

Other more sophisticated averages are: trimean, trimedian, and normalized mean, with their generalizations.[1]

One can create one's own average metric using the generalized f-mean:

Given a time series such as daily stock market prices or yearly temperatures people often want to create a smoother series.[3] This helps to show underlying trends or perhaps periodic behavior. An easy way to do this is to choose a number n and create a new series by taking the arithmetic mean of the first n values, then moving forward one place and so on. This is the simplest form of moving average. More complicated forms involve using a weighted average. The weighting can be used to enhance or suppress various periodic behavior and there is very extensive analysis of what weightings to use in the literature on filtering. In digital signal processing the term “moving average” is used even when the sum of the weights is not 1.0 (so the output series is a scaled version of the averages).[4] The reason for this is that the analyst is usually interested only in the trend or the periodic behavior. A further generalization is an “autoregressive moving average”. In this case the average also includes some of the recently calculated outputs. This allows samples from further back in the history to affect the current output.

The first recorded time that the arithmetic mean was extended from 2 to n cases for the use of estimation was in the sixteenth century. From the late sixteenth century onwards, it gradually became a common method to use for reducing errors of measurement in various areas.[5][6] At the time, astronomers wanted to know a real value from noisy measurement, such as the position of a planet or the diameter of the moon. Using the mean of several measured values, scientists assumed that the errors add up to a relatively small number when compared to the total of all measured values. The method of taking the mean for reducing observation errors was indeed mainly developed in astronomy.[5][7] A possible precursor to the arithmetic mean is the mid-range (the mean of the two extreme values), used for example in Arabian astronomy of the ninth to eleventh centuries, but also in metallurgy and navigation.[6]

However, there are various older vague references to the use of the arithmetic mean (which are not as clear, but might reasonably have to do with our modern definition of the mean). In a text from the 4th century, it was written that (text it square brackets is a possible missing text that might clarify the meaning):[8]

In the first place, we must set out in a row the sequence of numbers from the monad up to nine: 1, 2, 3, 4, 5, 6, 7, 8, 9. Then we must add up the amount of all of them together, and since the row contains nine terms, we must look for the ninth part of the total to see if it is already naturally present among the numbers in the row; and we will find that the property of being [one] ninth [of the sum] only belongs to the [arithmetic] mean itself...

Even older potential references exist. There are records that from about 700 BC, merchants and shippers agreed that damage to the cargo and ship (their "contribution" in case of damage by the sea) should be shared equally among themselves.[7] This might have been calculated using the average, although there seem to be no direct record of the calculation.

According to the Oxford English Dictionary, "few words have received more etymological investigation."[9][not in citation given] In the 16th century average meant a customs duty, or the like, and was used in the Mediterranean area. It came to mean the cost of damage sustained at sea. From that came an "average adjuster" who decided how to apportion a loss between the owners and insurers of a ship and cargo.

Marine damage is either particular average, which is borne only by the owner of the damaged property, or general average, where the owner can claim a proportional contribution from all the parties to the marine venture. The type of calculations used in adjusting general average gave rise to the use of "average" to mean "arithmetic mean".

A second English usage, documented as early as 1674 and sometimes spelled "averish," is as the residue and second growth of field crops, which were considered suited to consumption by draught animals ("avers").[10]

The root is found in Arabic as awar, in Italian as avaria, in French as avarie and in Dutch as averij. It is unclear in which language the word first appeared.

There is earlier (from at least the 11th century), unrelated use of the word. It appears to be an old legal term for a tenant's day labour obligation to a sheriff, probably anglicised from "avera" found in the English Domesday Book (1085).