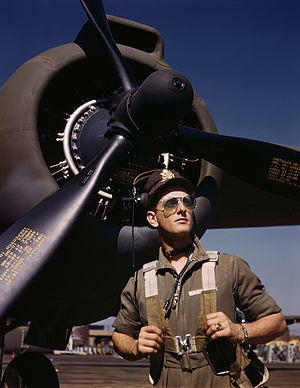 An aircraft pilot or aviator is a person who actively and directly operates the directional flight controls of an aircraft while it is in flight. While other members of a flight crew such as flight engineer, navigator, or any other person involved in the direct flight operations of an aircraft (whether it be a fixed wing airplane, rotary-wing, powered, or unpowered), are also considered "aviators", they are not pilots and do not command a flight or aircraft. Aircrew who are not involved in operating the aircraft's flight systems (such as cabin attendants and mechanics) as well as ground crew are not generally classified as aviators.

In recognition of the pilots' qualifications and responsibilities, most militaries and many airlines worldwide award aviator badges to their pilots, as well as other air crews. This includes naval aviators.

The first recorded use of the term aviator (aviateur in French) was in 1887, as a variation of "aviation", from the Latin avis (meaning bird), coined in 1863 by G. de la Landelle in Aviation Ou Navigation Aérienne ("Aviation or Air Navigation"). The term aviatrix (aviatrice in French), now archaic, was formerly used for a female aviator. These terms were used more in the early days of aviation, when airplanes were extremely rare, and connoted bravery and adventure. For example, a 1905 reference work described the Wright brothers' first airplane: "The weight, including the body of the aviator, is a little more than 700 pounds".[1]

To ensure the safety of people in the air and on the ground, early aviation soon required that aircraft be under the operational control of a properly trained, certified pilot at all times, who is responsible for the safe and legal completion of the flight. The Aéro-Club de France delivered the first certificate to Louis Blériot in 1908—followed by Glenn Curtiss, Léon Delagrange, and Robert Esnault-Pelterie. The absolute authority given to the "pilot in command" derives from that of a ship's captain.[citation needed]

Civilian pilots fly aircraft of all types privately for pleasure, charity, or in pursuance of a business, and/or commercially for non-scheduled (charter) and scheduled passenger and cargo air carriers (airlines), corporate aviation, agriculture (crop dusting, etc.), forest fire control, law enforcement, etc. When flying for an airline, pilots are usually referred to as airline pilots, with the pilot in command often referred to as the captain.

Commercial airline pilots in the United States have a mandatory retirement age of 65, having increased from age 60 in 2007.[2]

Pilots licensing in Canada is similar to the United States.

The Aeronautics Act of 1985 and Canadian Aviation Regulations provide rules for pilots in Canada.

Retirement age is provided by each airline with some set to age 60, but changes to the Canadian Human Rights Act have restricted retirement age set by the airlines.[3]

In some countries, such as Pakistan,Thailand and several African nations, there is a strong relationship between the military and the principal national airlines, and many airline pilots come from the military; however, that is no longer the case in the United States and Western Europe.[citation needed] While the flight decks of U.S. and European airliners do have ex-military pilots, many pilots are civilians. Military training and flying, while rigorous, is fundamentally different in many ways from civilian piloting.

Military pilots are trained with a different syllabus than civilian pilots, which is delivered by military instructors. This is due to the different aircraft, flight goals, flight situations and chains of responsibility. Many military pilots do transfer to civilian-pilot qualification after they leave the military, and typically their military experience provides the basis for a civilian pilot's license. 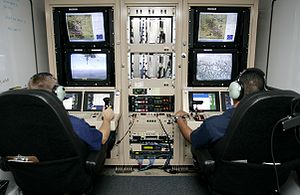 Operators in a control room pilot and monitor video feeds from a remotely piloted UAV.

Unmanned aerial vehicles (UAVs, also known as "drones") operate without a pilot on-board and are classed into two categories: autonomous aircraft that operate without active human control during flight and remotely piloted UAVs which are operated remotely by one or more persons. The person controlling a remotely piloted UAV may be referred to as its pilot or operator. Depending on the sophistication and use of the UAV, pilots/operators of UAVs may require certification or training, but are generally not subject to the licensing/certification requirements of pilots of manned aircraft.

The general concept of an airplane pilot can be applied to human spaceflight, as well. The spacecraft pilot is the astronaut who directly controls the operation of a spacecraft, while located within that same craft (not remotely). This term derives directly from the usage of the word "pilot" in aviation, where it is synonymous with "aviator". Note that on the U.S. Space Shuttle, the term "pilot" is analogous to the term "co-pilot" in aviation, as the "commander" has ultimate responsibility for the shuttle. 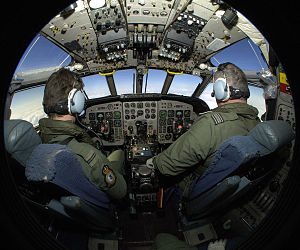 The next step in a pilot's progression is either Instrument Rating (IR), or Multi-Engine Rating (MEP) endorsements.

If a professional career or professional-level skills are desired, a Commercial Pilot License (CPL) endorsement would also be required. To captain an airliner, one must obtain an Airline Transport Pilot License (ATPL). Now, even when being a First Officer (FO), an ATP is required.[5]