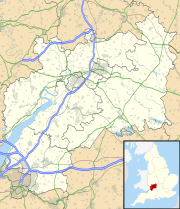 The railway is part of the otherwise-dismantled Midland Railway Mangotsfield and Bath Branch Line, which was closed in 1966 as a result of the Beeching cuts and due mainly to the Great Western Railway being just a few miles to the south, which also connected Bristol and Bath.[1]

The railway is perhaps best known for connecting the former Somerset and Dorset Joint Railway (S&DJR), whose northern terminus was at Bath Green Park station, with the London, Midland and Scottish Railway (LMS). The Midland Railway lines along the Avon Valley thus opened up the S&D lines to travellers from the British industrial Midlands. This was particularly so during summer Saturdays when families flocked south to the beaches of Dorset and the English south coast. Many extra trains thus had to be added to the schedule to accommodate this increased demand.[2][3] Although owned and run by the Midland Railway, many S&D locomotives were often seen working trains along this line.

After the lines were removed, from 2000 the northern section from Mangotsfield to Warmley was used to build a dual carriage development of the A4174 road, although both station sites presently still exist. The remainder of the line was passed from the British Railways Board to Sustrans, who in co-operation with the local councils developed the Bristol & Bath Railway Path.[4] Further development of the preservation railway is wholly dependent on a usage agreement with Sustrans.

Bitton station and its yard, including some trackbed, was leased from British Railways Board by the Bristol Suburban Railway Society, a group of local volunteers intent on restoring commuter and weekend steam use to the Bristol-Mangotsfield-Bath and Mangotsfield-Yate railway routes.

In 1979, the Bristol Suburban Railway Society was incorporated into the Bitton Railway Co. Ltd. and the laid track reached Oldland Common in 1988. By 1992 however, the city of Bristol had expanded greatly with houses encroaching upon the former railway line and expansion north to Warmley and Mangotsfield was no longer practical.[5] The line thus began to expand south out into the valley of the River Avon. By 2004, it had crossed the Avon and a new station was built to service the Avon Valley Country Park – a large picnic and recreation site – along with a river wharf to provide visitors with connections to river barges and river boat trips.

Work continues to extend the railway south-east towards Kelston, Weston and a proposed "Bath Riverside" railway station in Bath.[7]

As a tourist attraction, the Avon Valley Railway now handles 80,000 visitors per year. The AVR provides round trip steam train travel from Bitton Station north to Oldland Common then south to Avon Riverside station. The line is open to travellers on most weekends.