Avon and Somerset Constabulary is the territorial police force in England responsible for policing the non-metropolitan county of Somerset and the now-defunct county of Avon, which includes the city and county of Bristol and the unitary authorities of Bath and North East Somerset, North Somerset and South Gloucestershire.

As of 2015[update] the force is controlled by T/CC Gareth Morgan due to Nick Gargan's resignation. It is the second force that uses the right to have two serving Deputy Chief Constables along with Police Scotland, as DCC Rob Beckley QPM is currently seconded to the College of Policing as Chief Operating Officer 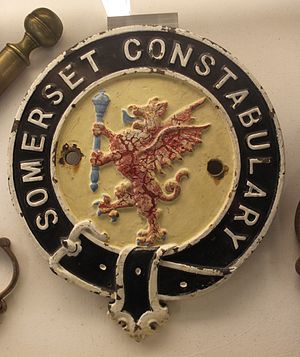 The first police force in England was formed in Covent Garden by Somerset born novelist Henry Fielding, in 1748.[3] In 1835, Bristol and Bath became the first to create their own police forces in the county itself, after that year's Municipal Corporations Act. The original Bristol constabulary had 232 officers issued with a top hat, blue coat and white trousers.[4] this constabulary began certain practices that were eventually adopted country-wide, including recruiting female officers (with 13 on patrol by 1918[4]) and photographing prisoners. Bridgwater and Chard followed with their own constabularies in 1839, with all forces being merged into the Somerset Constabulary in 1940, under the County Police Act.

The force as it is today was created on 1 April 1974, the same day as Avon, from a merger of the Bristol City Police, the Somerset and Bath Constabulary, and the Staple Hill division of Gloucestershire Constabulary. It was the only force to provide a mounted escort for the Queen during her Royal Jubilee tour of Bristol in 1977.[4]

The Chief Constable was Nick Gargan, selected by Sue Mountstevens to replace Colin Port, following his decision not to re-apply for the position after the Police and Crime Commissioner (PCC) announced on 22 November 2012 that she would invite applications for the role rather than extending his contract.[5] In January 2013, Port took the PCC to court to seek an injunction to block the interviews of candidates for the post of Chief Constable.[6] In mid-May 2014, Gargan was suspended by Commissioner Mountstevens following allegations of 'inappropriate behaviour towards female officers and staff'. The enquiry into the allegations was referred to the Independent Police Complaints Commission (IPCC).[7] Gargan is reported by the Commissioner to have denied the allegations. During the period of Gargan's suspension, the force was be run by the Deputy Chief Constable, John Long. Gargan resigned in October 2015.[8]

The headquarters of the force is currently Portishead in North Somerset, close to the B3124, it was chosen as the site for the new HQ when the Bristol Constabulary's Bridewell Headquarters was deemed to be too small to continue serving as the Force's HQ. The Portishead complex cost £31 million to construct and was opened by Queen Elizabeth II on 2 June 1995.[4]

Avon and Somerset Police use a total of 41 police stations.

It is the second force that uses the right to have 2 serving Deputy Chief Constables along with Police Scotland, as DCC Rob Beckley QPM is currently seconded to the College of Policing as Chief Operating Officer 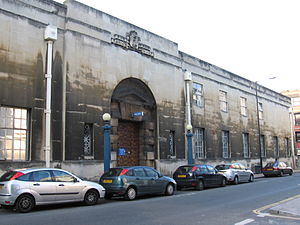 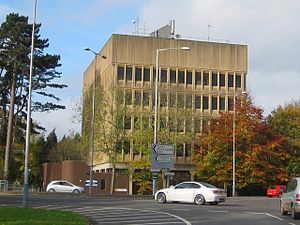 To support the BCUs, several centralised teams operate from the Portishead headquarters: 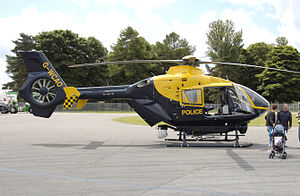 The Western Counties Air Operations Unit is a police helicopter based at Filton Airport, that is shared between Avon and Somerset Constabulary and Gloucestershire Constabulary, who both own half the aircraft. The helicopter is staffed by officers of both forces and features various technology including thermal imaging, a nite-sun spotlight and Global Positioning System (GPS) and radio tracker systems. The aircraft has a scramble time of two minutes. The helicopter can also be used as an air ambulance when required.

The Road Policing Unit (RPU) is now part of a Tri Force Collaboration with Wiltshire and Gloucestershire Constabularies that is specifically focused on policing the roads and motorways of Avon and Somerset and the adjoining police areas. This collaboration also encompasses the Armed Response Units and Police Dog Patrols. The RPU has 55 cars and 28 motorcycles.[11] The RPU has three bases, Almondsbury, Weston-Super-Mare and Taunton.

Avon and Somerset Constabulary has a Support Group that specialise in very specific needs of investigations or missions, such as police divers, football match management and explosive searching.[12] The officers chosen for Support Group duties are physically elite and have passed extensive tests. 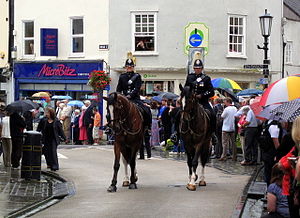 Although considered a luxury in other forces, Avon and Somerset Constabulary have a division of mounted police due to the many events that attract large crowds in the area such as Badminton Horse Trials, Glastonbury Festival and Bristol Rovers Football Club. The unit consists of 12 bred bay geldings. The unit is occasionally loaned to neighbouring forces as Avon and Somerset are the only West Country police force with a mounted division.[13]

Avon and Somerset Police officers wear the traditional custodian helmet in the rose style with a Brunswick star that reads 'Avon and Somerset Constabulary', for foot patrol. And a peaked cap for when on mobile patrol in vehicles, and a white peaked cap for traffic officers. Female officers wear a bowler hat, or a white bowler hat for traffic officers. 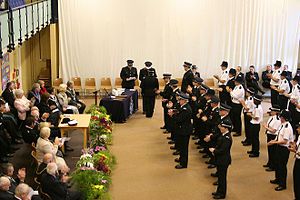 When on duty officers wear the traditional white shirt and black tie, covered with a black stab vest reading 'Police' on the front and back. Avon and Somerset no longer use the traditional police jumper, having favoured the black fleece with 'Police' written on the chest and back. Avon and Somerset officers do not have Brunswick stars on their epaulettes, just the rank and/or collar number. Female officers do not wear the black and white checkered cravat.

Formal dress comprises an open-necked tunic, with white shirt/blouse and tie. Constables and Sergeants wear custodian helmet's and collar numbers on their epaulettes, all higher-ranked officers wear peaked caps, name badges and their rank on their epaulettes. The No.1 uniform is accompanied by black boots or shoes and occasionally black gloves, or brown gloves for the rank of Inspector and above.

Avon and Somerset Constabulary use a variety of standard UK Police equipment including TETRA digital radios, rigid handcuffs, CS spray and the ASP collapsible baton. Some officers also routinely carry the TASER Stun device designed to electrically shock a subject making them fall to the ground and to be subdued.[14]

During late 2009 Avon and Somerset Constabulary introduced mobile data terminals and Personal Digital Assistants (PDA) to some of its operational vehicles and front line officers. This is steadily being rolled out across the force. Most front line officers now have their own PDA designed to assist the officer in his/her day to day tasks and allows them to spend more time out of the station.

The Avon and Somerset Constabulary uses the modern blue and yellow retro-reflective square Battenburg markings on all of its operational vehicles. This style of livery was introduced in 2005, when the traditional 'jam sandwich' style police markings were removed in favour of the new livery, thought to aid officers responding to emergency calls by allowing the public to quickly and clearly identify the vehicle as belonging to the police.[15] The square livery also aids in the visibility of the force, which is perceived to enhance public confidence. Marked vehicles also show the force's Internet address on the rear and the word 'POLICE' across the bonnet. However, the force's crest is no longer used on most vehicles.

Avon and Somerset Constabulary has kept the same name since it was formed in 1974, before which its preceding forces had separate names.

Avon and Somerset are making varied progress in fighting crime and maintaining public support. Overall 124,89 crimes were recorded in Avon and Somerset during 2009/10. Nationally recorded crime fell by 9%.
This included a 22% fall in car crime, a 19% fall in fraud, a 13% fall for robbery and criminal damage. However assault and sex crimes rose by 1% and 'Other Crimes' including public order offences, dangerous driving, possession of firearms, going equipped for stealing, and perverting the course of justice rose by 26%.[18]

For the year of 2009/10 Her Majesty's Inspectorate of Constabulary rated Avon and Somerset Constabulary as 'Fair' all categories including 'Local Crime', 'Protection from harm' and 'Satisfaction and Confidence'. It was particularly 'Good' in 'Reducing road death and injury' and particularly 'Poor' in 'Comparative satisfaction of BME [black and minority ethnic] community'. In value for money the force received 'Medium/High' status.[20]

For the year of 2007/8 the Independent Police Complaints Commission received 800 complaint cases, an increase of 18& from 2006/7, compared to a 0% increase nationally. From which 1231 allegations were made, including 'Other neglect or failure in duty' and 'Incivility, Impoliteness and Intolerance' both 6% and 3% respectively lower than the national average. Avon and Somerset Constabulary was second lowest in its seven strong peer group.
Of the 1231 allegations made, 40% were investigated, 8% higher than the national average, 41% were resolved locally and 19% were withdrawn, dispensed with or discontinued. Of the 40% investigated, 12% were substantiated and 88% were unsubstantiated.

The plans have been publicly criticised by all the involved forces, stating that it would lead to poor quality service and a reduction in local policing.[21]

Race and sex discrimination in recruitment

In 2006, the force admitted it had contravened the Sex Discrimination Act and Race Relations Act when it deselected 186 white male candidates from its recruitment process solely because of their gender and race. Ralph Welsman, one of those discriminated against, sued the constabulary for their breach of employment laws and he received compensation in an out of court settlement. The policy was condemned by both the Police Federation and Commission for Racial Equality and it has now been abandoned.[23][24]

The Police Memorial Trust lists and commemorates all British police officers killed in the line of duty, and since its establishment in 1984 has erected over 38 memorials to some of those officers. Officers killed include:[25]