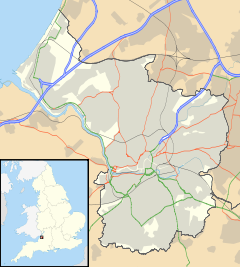 Location of Avonmouth Bridge in Bristol

The Avonmouth Bridge is a road bridge that carries the M5 motorway over the River Avon into Somerset near Bristol, England. The main span is 538 ft (164 m) long, and the bridge is 4,554 ft (1,388 m) long, with an air draught above mean high water level of 98.4 ft (30 m). It also has a separate footpath and cycleway which connects with Avonmouth station.

The bridge was built to allow tall ships underneath. This gave the bridge steep gradients that cause heavy vehicles to slow down, resulting in congestion during rush hour and the summer tourist season: traffic can back up both on the bridge and on the approaches.

The construction contract was let to Fairfield-Mabey and commenced in 1969; Fairfield-Mabey placed a sub-contract with Tarmac Civil Engineering for the foundations, piers and deck concreting works.[1]

The approach and initial climb up the bridge have a smooth asphalt surface; however, on the top of the bridge the surface was uneven and bumpy when it was built. In September 2006, it was announced that the entire bridge would be resurfaced, only five years after the last resurfacing. This was completed in November 2009 by the construction firm Stirling Lloyd. However, the surfacing was carried out by the Swiss firm Aeschlimann using its own workforce and also importing all the plant used. A new type of asphalt called Gussasphalt was used on the bridge deck. In addition to having a smooth, skid-resistant finish, it requires no compaction and can be applied in very thin layers, thus reducing the weight added to the bridge. It is also flexible and as a result should last longer than the previous resurfacing.[2]